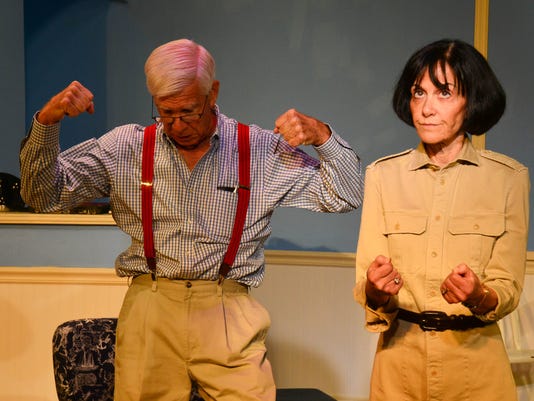 The Marco Players’ production of “Sex Please We’re Sixty” is an American farce of charming and funny explorations into the secret desires of men and women of a certain age who are determined to find what they seem to have lost – their libidos!

The story takes place at Rose Cottage Bed and Breakfast in New England, owned by Mrs. Stancliffe (Carol Clarke). The cottage attracts repeat business (mostly women), who return each year for, maybe a couple of reasons.

Neighbor Bud “the Stud” (Kip Jones) enthusiastically welcomes his “chicks” (Mai Puccio, Rhonda Davis and Cindy Hile) believing that the main reason these women return is to “romance” with him. In the meantime, neighbor and chemist Henry (Joe Kelly), has developed a new pill designed to increase the libido of menopausal women. As you can imagine, there are unsuspected turns that result in eager seniors and a great deal of fun.

“The cast was excited to begin rehearsal the day after the theater’s power was restored,” said says Beverly Dahlstrom, artistic director. We will be ready for a fast-paced, energy-filled opening night.”

“Sex Please We’re Sixty” is on stage Oct. 25-Nov. 12 at The Marco Players Theater, Marco Town Center Mall, 1089 N. Collier Blvd., Marco Island.  Shows are Wednesday through Saturday at 8 p.m. and Sundays at 3 p.m. Attend the first week of the show and automatically be entered in a drawing to win a dinner cruise for two on The Marco Island Princess.