The Bookworm: From Kardashian ambition to racial tension

How does she get away with it? Every time you see your favorite star behaving badly, you have to wonder, don’t you?

The Bookworm: From Kardashian ambition to racial tension

“The Kardashians: An American Dream”

How does she get away with it? Every time you see your favorite star behaving badly, you have to wonder, don’t you?  She falls into a pit of scandal almost monthly and comes out smelling like a bottle of very expensive perfume. It’s amazing. It’s common. And in “The Kardashians” by Jerry Oppenheimer, you’ll see that it might’ve been planned.

The Empire began “in the poor, mostly unschooled Deep South … ” Kristen “Kris” Houghton, born to an ambitious mother and an absent, alcoholic father, was a well-liked beauty with an outgoing personality and many good friends but her aspirations, says Oppenheimer, didn’t seem to go beyond finding a rich man to marry. Guided by her mother, teenage Kris looked and acted much older than she was, so she started her search at grown-up clubs and parties.

Her first love was nine years older than she. Not long after becoming engaged to that older man, Kris met Robert Kardashian, lawyer and sometime entrepreneur, whose star was on the rise. She was “in her late teens,” he was 30 years old. He was smitten and gave her self-improvement tapes; Oppenheimer says she cheated on her fiancé with him, then she told Kardashian to get lost. He did – briefly dating Priscilla Presley before reconciling with Kris and ultimately convincing her to marry him, but not before introducing her to his friend, O.J. Simpson.

By all outward appearances, the Kardashian marriage was a happy one. The couple had four (or, Oppenheimer says, maybe three) children in the time they were married and Kardashian treated Kris like a “princess.” She never wanted for a thing.

The claws come out in author Jerry Oppenheimer’s “The Kardashians: An American Dream.” Oppenheimer uses Kris Kardashian’s biography and her own words in this tell-most – and he often does it to turn the tables on sunny tales she’s told. (Photo: Photo by Caroline Walton Howe)

“Still,” says Oppenheimer, “she cheated on him. But first came new breasts.”

Despite nasty rumors swirling around Hollywood, Kris married Olympian Bruce Jenner (who’d been married to Elvis’s one-time girlfriend) very soon after her divorce from Robert Kardashian. The Jenners then set about raising his-hers-and-our kids in a “loving,” boisterous household and in the spring of 2002, she offered up that “’crazy Hollywood family’” to reality TV.

Deliciously snarky and filled with lines that will make you gasp before you LOL, reading “The Kardashians” is like doing a cannonball into a pool filled with two decades’ worth of supermarket tabloids. Ker-splash. 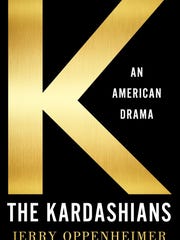 The claws come out in author Jerry Oppenheimer’s introduction, and they don’t re-sheath until … well, they just don’t. Oppenheimer uses Kris Kardashian’s biography and her own words in this tell-most – and he often does it to turn the tables on sunny tales she’s told. Further OMG scandal is found through interviews with people associated with Robert Kardashian, O.J. Simpson, Nicole Simpson, Linda Thompson, Kris-as-teenager, Kimye, Khloe, and others in an ever-swirling Kardashian circle. Readers, in fact, may be surprised at how far that circle extends.

Jaws will drop with this book, pearls will be clutched but overall, it’s a lot of snide fun with occasional shades of Schadenfreude. Who could resist? If you’re traveling this winter – not you. Be sure “The Kardashians” is a book you get away with.

What if your entire future was mapped out for you? All you’d have to do is show up, keep your nose clean and your mouth shut. But what if you couldn’t? What if the color of your skin had some bearing on it, and your outrage and need for understanding made you speak up?  As in the new novel, “Dear Martin” by Nic Stone, WWMLKD?

It was supposed to have been a nice thing. When Justyce McAllister saw his ex-girlfriend, Melo, next to her car, drunk and half-dressed, he knew there was no way she could drive herself home and he wasn’t about to leave her in that neighborhood. She hollered when he took her keys. She smacked him as he poured her into the passenger’s seat, which was nothing compared to what happened when the cops stopped and cuffed him, thinking that he was hurting Mel, whose skin was more light. 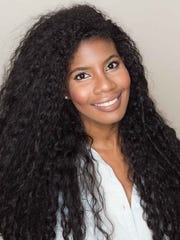 In “Dear Martin: A Novel,” through an observant narrator and the spot-on voice of a teenage boy, author Nic Stone takes national news and gently twists it into a believable tale that’s smooth and somewhat unruffled until – bam! – Stone drops a gigantic stone into the story. (Photo: Photo by Nigel Livingstone)

He’d never forget the feel of those cuffs, which led him to a search for understanding through the words of Martin Luther King, Jr. Justyce felt that if he could live like Martin, he might be able to tolerate things like being guilty until proven innocent because of his race.

He might also be able to withstand guys like Jared, who was in Justyce’s debate class. From his head to his toes, Jared was racist, hiding behind fake equality in his pathetic arguments and complaints about reverse discrimination. 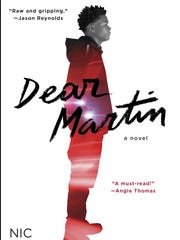 Couldn’t everybody see through people like that? No, Manny couldn’t. Manny was Justyce’s best friend but he was Jared’s friend, too, which was something Justyce couldn’t understand. He didn’t get why Manny agreed with Jared’s comments or why he hung out with Jared’s crowd. Manny was Black. He had a cousin who was gang-banging but he stayed friends with a fool.

No matter. Justyce had his own issues and he wondered what Martin would do. Surely, Dr. King wouldn’t stay quiet about racial profiling. Would Martin fall for a white girl? And this: Martin chose to be nonviolent, but what about everybody else?

What can you say about a book that surprises, gives you goosebumps, makes you happy, and then makes you sad? If it’s “Dear Martin,” you say, “Yes, please.”

Through an observant narrator and the spot-on voice of a teenage boy, author Nic Stone takes national news and gently twists it into a believable tale that’s smooth and somewhat unruffled until – bam! – Stone drops a gigantic stone into the story. If you haven’t fallen for her perfectly-created characters by that point, she’ll have your compete attention there. What happens next, and next after that, is unexpected – don’t even try to guess – and it’ll have you turning pages. Indeed, you’ll absolutely need to know how this tale ends and how a man who’s been dead nearly five decades impacted it.

This may be one of the most truthful, chilling novels your teenager may read this winter, but you need to find it anyway. “Dear Martin” is a winner, and what if you miss it … ?

“Grass Roots: The Rise and Fall and Rise of Marijuana in America”

Is the grass greener on the other side of the fence? It doesn’t seem to be. Your side looks just fine, healthy, and filled with weed. There’ll be no poison on that, though; weed is exactly what you want there and in the new book “Grass Roots” by Emily Dufton, you see how, historically, that’s been a good thing and it’s been bad.

“Grass Roots” proves that marijuana has had its highs through the years – and its lows. But learning about it could have been so much more fun.

True, there’s a lot of historical information inside this book, so it can absolutely be said that author Emily Dufton offers what her subtitle promises. There are dates and stats and Presidents and activists here, plenty of laws and names, but all that info is pretty dry in its delivery. It’s not bad -- it’s just not very lively. It should also be mentioned that it’s mostly about smoke-able marijuana, not hemp-as-crop.

And yet – anyone wanting to know about where weed’s been and where it’s going would be happy with this book. It’s comprehensive and fact-filled, which makes it a treasure-trove for the right reader. And if that’s you, then “Grass Roots” is a great place to spend your green.

“This is How We Rise”

Things are going to be different around here this year. You’re going to shake things up, for starters. No more status quo, no more complacency. You’re going to think better, do better, be better than ever before and you’re going to bring your entire staff along with you. Read “This is How We Rise” by Claudia Chan, and you could find your blueprint for change.

Part religion, part new-age, part sociology, part feminism, there’s business inside this book but it’s overwhelmed by wordiness. Yes, author Claudia Chan writes extensively about leadership, but it’s exhausting to read about it because of all the other things you must get past first. You’d absolutely be forgiven if your thoughts drifted …

Having said that, however, I think there truly is an audience for this book – but it’s not necessarily business. “This is How We Rise” is great for new college grads whose focus is to gain experience through social issues and change-based start-ups – but be warned: the above caveats still hold. This book is just too wordy.

So. Wrap it up for a Millennial; this book belongs in her hands. If you’ve already been in business for a while, you may find “This is How We Rise” to be a little bit too different.

More: The Bookworm: Animal love and a radical life