Boy meets girl and falls in love. It works that way in the movies and music but not so in real life, as most adults can attest. 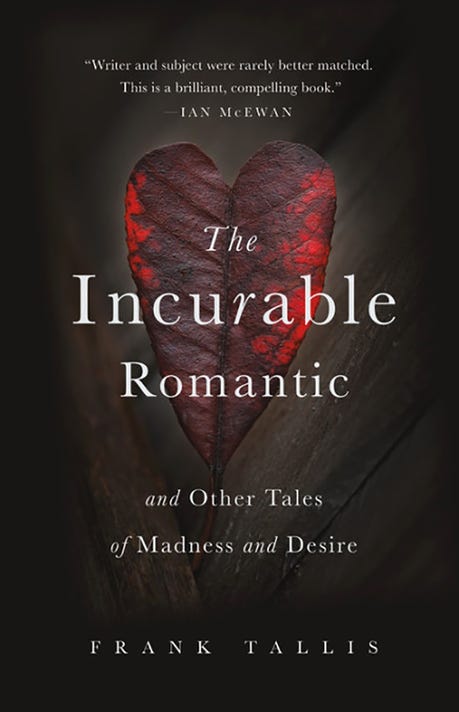 â€œThe Incurable Romantic and Other Tales of Madness and Desireâ€ by Frank Tallis. (Photo: Basic Books)

“The Incurable Romantic and Other Tales of Madness and Desire”

Oh, how your heart beats for your beloved! Well, most of the time, anyway. At other times, love makes you act like a fool. It makes you a little loco but “The Incurable Romantic” by Frank Tallis proves that it’s not your heart’s fault. Your brain is absolutely to blame.

More: The Bookworm: The final word on Hitler? Historic context

Boy meets girl and falls in love. It works that way in the movies and music but not so in real life, as most adults can attest. When boy + girl = problems, we feel angry, sad, desperate and, as a psychotherapist, Frank Tallis has noted each of those emotions and more.

Love, as he’s seen, is a complicated thing and can be completely one-sided. He describes a former patient, a rather plain woman who fell inexplicably and instantly in love with her handsome dentist. The problem was, he was happily married to someone else.

For most people, Tallis says, “love stands on three legs”: intimacy (closeness), passion (sexual) and commitment. Take away one of those things, he indicates, and a relationship will falter and die. Then again, he writes of one long-married couple that endured with a total absence of one “leg.”

In some relationships, an ugly green monster rears its head and when that happens, it can ruin any happiness that might exist. Tallis says that about 10 percent of all murders are committed in the name of jealousy; the one he offers here didn’t get that far, but readers can surely see where it might have …

Having relationship psychotherapy, he says, can have parallels to the “Catholic confessional.” It can “be likened to an emotional striptease” as layers are revealed to get to a truth. Love itself can be joyous, painful, or both, concurrently, and it should never be trivialized, no matter what the age of the lovelorn. Love can be illegal, which demands a squirmy and delicate dance with a psychotherapist. It can be confusing and unwanted, secret, imperfect, uncomfortable, selfish, and – in at least one case that Tallis presents – love can be very, very dangerous.

Why do we love the ones we love?  Biology, conditioning, parenting, or hardwiring, there are dozens of things that make someone attractive. In “The Incurable Romantic,” you’ll see how those things can go wrong in dozen of ways.

Still your heart, though: author Frank Tallis isn’t the guy who harrumphs at Valentine’s Day. It’s apparent, as you read the accounts he shares, that relationships are endlessly fascinating to him, and that’s contagious: you’ll want to watch as Tallis helps his patients help themselves. There’s a slightly voyeuristic feel to that, as though we’re overhearing awkward living room conversations or peeking into messy bedroom windows. Tallis doesn’t share this in a prurient way, however; instead, his compassion for the lovelorn shows in considerate diagnoses and sometimes even befuddlement.

This is a great book for romance readers who want a little less fluff, for people-watchers, and for anyone curious about how we tick. If you’ve ever loved or loved and lost, “The Incurable Romantic” can’t be beat.

“Food Fight! A Mouthwatering History of Who Ate What and Why Through the Ages”

Your stomach’s growling. The last time you ate was – how long ago? Three hours? Twenty minutes?  Either way, you’re hungry again and the last meal you ate is long forgotten. In the new book “Food Fight!” by Tanya Steel, you’ll read about other foods enjoyed in the past.

More: The Bookworm: Substance abuse and family; kids and politics

Imagine that you’re a cave kid that just got home from cave school.

Like now, you’re starving, and ready for an after-school snack. But chips haven’t been invented yet, and neither has ice cream or microwaves. In fact, until a million years ago, people couldn’t even control fire. No, for snacks and pretty much every meal, you would have gathered your food from bushes and rocks.

â€œFood Fight! A Mouthwatering History of Who Ate What and Why Through the Agesâ€ by Tanya Steel.  (Photo: National Geographic Kids)

If you were a member of the upper class in Egypt, though, you might have dined well. A menu for King Merneptah then offered a feast of biscuits, “beef innards,” sheep, ducks and fish. If you weren’t a friend of his or a member of royalty, well, it’s back to the bushes and rocks for dinner for you.

By the time the Roman Empire was in charge, things were different. Fire had been harnessed and people knew how to enjoy food. Spices were available for families that could afford them and meals were eaten at tables. The Romans had created tools for the kitchen, and cooking was something many enjoyed doing – even if some of the dishes created consisted of flamingo tongues or peacock brains.

If you lived during the late 1700s in America, you might have wanted to head back to those bushes. Starvation was a real possibility in the years after the Revolutionary War, but foraging was a way to survive: “common foods” then were things you could hunt or gather: oysters, squirrel and wild pig.

And 50 years ago?  Well, TV dinners, fish sticks, and diet soda were all new. French cooking was something everybody wanted to learn to do. Microwaves were starting to show up in American kitchens, Tupperware was cool, and if you went to one of those new fast-food restaurants, you could get ketchup in little packets. Eat up!

Years ago, you took pride in a child who was a “good eater.” Now make her a good reader, too, by finding “Food Fight!”

There are lots of reasons for a young diner or future chef to love this book. It starts with a wide look at food through the ages, told in sidebars and fun-to-know information, brief bits on history and everyday life, and lots of pictures, artwork, humor, and quizzes to appeal to the kind of kid who shakes things up by having dessert first. Then, for young foodies, this book goes even further with a list of safety tips to accompany thirty recipes your kids can try, and share.

For children ages 10-and-up, that’s like a multi-course meal that’s browsed at leisure and then served again later. It offers a varied menu for different kinds of readers, and it appeals to all tastes. For kids (and parents!) who love to eat, “Food Fight!” is yummy.

More: The Bookworm: A physician’s POV on healthcare