The Bookworm: Lessons from the farm, field

Ropes of diamonds and gold are not for you. A fancy car has no place in your garage, your home isn’t TV-worthy.

The Bookworm: Lessons from the farm, field 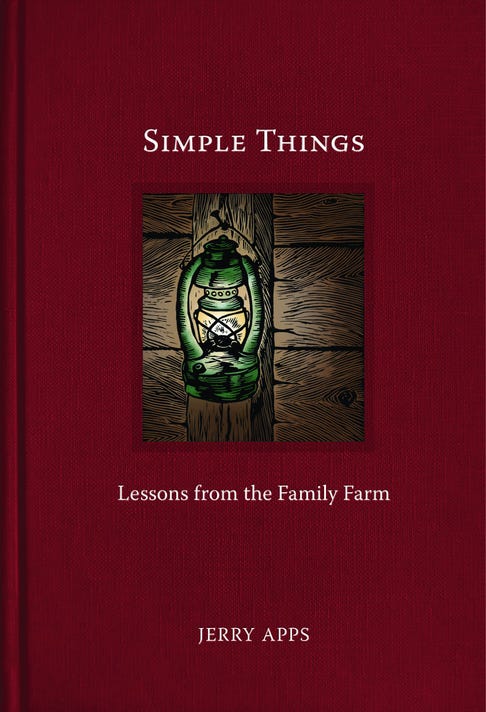 Ropes of diamonds and gold are not for you. A fancy car has no place in your garage, your home isn’t TV-worthy, and you’re happy with uncomplicated meals, hold the mustard. While it’s nice to have big luxuries, you recognize your quieter needs – and as in the new book “Simple Things” by Jerry Apps, you’re grateful for them, too.

When Jerry Apps was born on a little farm in rural north-central Wisconsin in the midst of the Great Depression, his parents didn’t enjoy the benefits of electricity or running water. Those things didn’t arrive at the Apps household for many more years, so the family led a simple life with a bounty of goodness.

For instance, on the farm, Apps says, one of the first things you learned was to appreciate tools. Different kinds of shovels did different kinds of jobs, and a boy knew he was a man when he had his own three-tined pitchfork. Apps’ dad was never without a pocket knife or pair of pliers, and Apps’ mother had a different kind of tool: her apron, which was towel, hot pad, bucket, and tear-wiper.

Today, we notch up a thermostat when the temperature dips but in the Apps household, keeping warm was a complicated task. Apps says his father rose early each day to start fires in the two wood-burning stoves that kept the family warm, putting a bucket of water on one stove to thaw for coffee-making. He then lit a fire in the pump house, one beneath the cattle water tank, one in the “potato cellar,” and then he started barn chores. 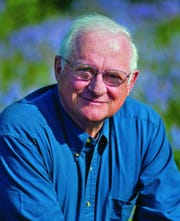 “Not once did I hear him complain … ” says Apps. “It was winter, after all, and that is what you did when you lived on a farm in Waushara County in 1946.”

Back then, it was scandalous when one had a messy haystack. Christmas meant two gifts: an article of clothing and a (single) toy. And a radio plus an imagination were all the entertainment a boy needed, except for the stories told on the back porch, at the feed mill, and at the Mercantile on Saturday night…

No celebrity gossip. No bumper-to-bumper traffic. No bars on windows and deadbolts on doors. No need to imagine: instead, read “Simple Things.”

Better yet, read it with someone who was also once a mid-century kid, because author Jerry Apps’ words will lead to conversations you’ll be glad you had and surprise stories you’ve never heard before. Apps is a master at description, so it’s hard not to take a magic feed-sack ride back seventy years when reading this book, hard not to hear farm sounds, impossible not to miss your grandparents fiercely. Indeed, this book may be slim, but it’s big on tale-telling and even bigger on nostalgia.

You may notice some repetition here and there inside this book, but you probably won’t mind a bit. It’s too charming for that; in fact, if you’re a Certain Age or you grew up on a family farm, “Simple Things,” will be a gem.

“The Greatest Football Teams of All Time”

You could never pass on a chance to catch the game. Yep, the salsa is hot, the soda is cold, you’ve got your lucky jersey on, and you’re ready to watch the World’s Greatest Football Team play to win – but which one is it? A team from today, or are you a throwback kind of kid? It’s debatable, and in the new book “The Greatest Football Teams of All Time” by Sports Illustrated Kids, you’ll have plenty of info for argument.

Everywhere you turn inside this book, you’re going to find G.O.A.T.s.

No, not the kind that eat grass; you’re going to find football G.O.A.T.s: The Greatest of All Time, in annual team, score, achievement, fantasy league, extra league play, and winnings. Is your favorite listed?

Starting with the “Top 20 Single-Season NFL Teams,” the number one team (according to the authors) is the 1985 Chicago Bears. Do a search of the Bears’ season, and you might find “The Super Bowl Shuffle,” a music video they made. Here, you’ll also find great stories of Walter Payton, Jim McMahon, “Refrigerator” Perry, and the other team members who beat the Patriots 46-10 at Super Bowl XX.

It might surprise you to see that the #3 team under this category lost their Super Bowl run in 2007, and the #4 pick played before your parents were even born!

Moving on, what if you could create your own team?  Get your picks ready and see what Chapter Two has to say about an offense Dream Team, a defense Dream Team, “special teams” and bench players.

So, let’s say that you love the NFL, but your heart is with a college team. This book has you covered, starting with the 1995 National Champions. And if you’re really, really into football, then keep reading: this book also looks at Canadian football, other league teams, and the Independent Women’s Football League. Score!

In its opening pages, “The Greatest Football Teams of All Time” indicates that debating and football go together. With this book, that’s most likely true.

The categories here are rather incomplete, though, which may be disappointing from the start and an argument. Rankings in each chapter, of course, are quite subjective and begging for discourse: were the Bears in ’85 really better than any other team since then, for example?  Opinions matter but before your child gets there, there’s one thing that will hamper any discussion: many of the teams listed here played so long ago that the only way kids will have a frame of reference is via video … if they’re lucky. Another off-putter: a few months from now, parts of this book may be incorrect.

Most irritating: while it’s meant for kids ages 8 and up, “The Greatest Football Teams of All Time” seems more for die-hard, older fans who can appreciate grown-up-level words, statistics, nuance, and all aspects of comparison. So, buy this book for a good-natured teen fan who might appreciate the nostalgia – or just totally pass.

More: The Bookworm: A nail biter and a whodunit!

More: The Bookworm: Matters of life and death