The Bookworm: Life and death situations

Dead men don’t tell tales. Or at least that’s what the old saying claims: once dead, a guy can’t talk.

The Bookworm: Life and death situations

Dead men don’t tell tales. Or at least that’s what the old saying claims: once dead, a guy can’t talk. Once dead, his jaw won’t move on its own and no sound comes from his vocal cords. He can’t rat out who made him dead – or can he? In the new book “All That Remains” by Sue Black, a dead man can almost seem to scream.

More: Bookworm: Ready to feel all fizzy inside?

Having a high-school job has been the usual way to go for generations of teens, but Sue Black had a very unusual one: she worked in a butcher shop, and often spent weekends up to her elbows in animal carcasses. 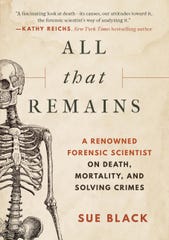 "All That Remains" by Sue Black. (Photo: Arcade Publishing)

She might’ve been happy there forever, but it was expected that she go to college, so she did. She’d thought of being a doctor, but she was too tenderhearted for that. Other studies were likewise rejected until Black dissected a human cadaver and developed a fascination with anatomy. That was when she settled on forensic science and becoming an anatomist, tasked with figuring out who the deceased was in life.

Though death is something that absolutely will happen to all of us, we talk about “losing” someone, as if it can be hidden by soft words. We ignore the fact that the longer we live, the closer we are to dying. We make last wishes that leave guilt for our survivors – or we don’t, leaving even more guilt. We think of cemeteries as final resting places, though there are other ways to legally deal with remains. We hope for a “good death” for our loved ones, but we pray it doesn’t come for a long, long time. We forget that someone doesn’t have to be alive to be present in our lives.

For professionals like Black, death brings other considerations: putting a name to a corpse can be a struggle when modern life and better healthcare can make identification of unidentified bodies difficult. War can cause the same kinds of problems; solutions don’t always come. And yes, crime happens …

Read the opening chapter of “All That Remains,” and you may feel as though you suddenly dropped into an accelerated etiquette class, so stiff and starchy is the writing. Don’t slouch. Don’t put your elbows on the dissecting table; but do stay – author Sue Black has a nice surprise for you.

All you really need is a little get-to-know-you time, as if finding a new friend before getting down to business with this book. Relax, and learn how many people have died in the last 50,000 years, which parts of you die quickest, and how you owe mom a big thank-you. Bury your nose some more, learn about cemeteries, and see how bodies are ID’d in war and disaster. And then, despite the gloominess of the main subject, laugh at Black’s own personal stories of death, DNA, and of life.

This is one of those books that’ll astound as it entertains. It’s a little shivery and oh-so-fascinating. And in the end, “All that Remains” is a tale you can live with.

You can never leave well-enough alone. There you are, always digging, recreating, imagining, tweaking here or there. There’s no answer unattainable, no solution beyond your grip. Good or bad, a “need-to-know” basis is your default position but, as in the new book “Cemetery Road” by Greg Iles, it could get you killed.

Marshall McEwan planned to never visit Bienville, Mississippi again. Leaving there had been his salvation years ago, and the key to his success. No, Bienville was a bad memory in Marshall’s rear-view mirror, and he’d planned to keep it that way. 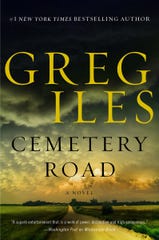 And then his father fell ill.Duncan McEwan, owner-publisher of Beinville’s only newspaper, was once a strong voice against injustice and racism but alcoholism and liver failure were taking a toll on him now, as they had on his relationship with his son in the past. It was only by request from his mother that Marshall went home again.

And there was Jet Matheson. They’d been childhood sweethearts once, and Marshall never stopped loving Jet, even though they’d gone their separate ways. Now in Bienville, he was divorced but she was not; years ago, Marshall turned Jet away, so she’d married Paul, Marshall’s old friend and the man who’d saved Marshall’s life. If Paul somehow learned that Marshall was sleeping with his wife now, Paul would kill him – if the “Poker Club” didn’t get there first.

Since the Civil War, that’s how Bienville’s wealthiest, most powerful men controlled the city, politically, financially, and socially. Now they were controlling extensive plans for construction of a Chinese paper factory that meant jobs for area residents, although plans went far beyond that. 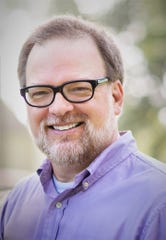 Yes, lives would be destroyed, property damaged, historic lands plundered, but billion-dollar contracts would line the already-cushioned pockets of wealthy men. It would happen, as long as the Poker Club – led by Jet Matheson’s father-in-law – could keep Marshall McEwen from learning secrets.

And they’d do that any way they could …

The best place to start with an almost-600-page book is at the beginning: “Cemetery Road” is very good but not very easy to read.

For sure, it’s one of the most realistic novels you’ll consume this spring but emulating real-life means real-life complications: a lot of people to keep track of, a lot of side-issues to remember, and personal histories to learn. It’s like moving to a small town and being expected to intimately know everybody, on-the-spot.

And yet, again like real-life, intricacies make things interesting. Here, you get your ubiquitous web of lies and intrigue; some truly awful, greedy characters, each with a personal agenda; and a Betty-Veronica-Archie-type love triangle that comfortably amuses as it blows up within the tale. Yes, author Greg Iles throws a lot at his readers, but he also gives them life rafts so they don’t drift too far off-course.

Ultimately, this is an excellent novel if you’ve fallen in love with thrillers but, like many relationships these days, it’s complicated. Give yourself some time, let yourself be absorbed, and you’ll like “Cemetery Road” well enough.

More: The Bookworm: Frats – the good, bad and ugly; intrigue and espionage