Bookworm: Loss and the price of life

Bookworm: Loss and the price of life

Sometimes, life stinks. Bad things happen to great people, but truly horrible things happen to you – things like losing a loved one, and that’s indescribable. Your emotions feel like shuffled cards: you’re foggy, sad, angry, exhausted, and tired of dealing with it all. So, what do you do next? You take a deep breath and read “The Hot Young Widows Club” by Nora McInerny.

Nora McInerny knows grief. She shouldn’t have to, but she does because her husband died some time ago at age 35, just before her father died, just before she miscarried what would have been her second child. And if that sounds like a lot, it is but she says not to compare her situation to yours. Loss is not a competition because “who could possibly win?”

If this is your first big loss, welcome to a club you “had no intention of joining.” What you may not realize yet is that you’re in good company, although dealing with your loss is uniquely yours and there are no rules or “right” ways to grieve, no expiration date, and there are no shoulds.

Although, maybe you should think about finding someone who’s been through this walk of widowhood, too, so you can scream into pillows together. McInerny recommends a “support group” of one or a dozen but find them on your own timeframe and do it in your own way. Oh, and “stop saying yes to the [things] you don’t want to do.” 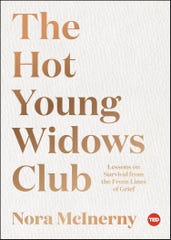 Remember that “you are not a machine, and grief is not a program you can run.”  If you’ve been through loss before, know that “every … loss is different … ” Understand that people can be awkward, they can be dumb, and that not every friendship will last beyond your grief. Accept help by naming a “Grief Manager” to coordinate everyone who wants to help do the “stuff you need done.” Embrace these words: “Why do you ask?” when faced with nosiness. And finally, remember that “Time can change you, and it will. But it can’t change [the departed], and it won’t.”

When you head to the store to buy your copy of “The Hot Young Widow’s Club,” be sure to pick up a package of sticky paper flags. You’ll use them up on every page of this helpful, hopeful book.

Truly, this is unlike any Coping with Loss book you’ve ever seen; first, because author Nora McInerny ignores euphemisms. There’s no candy-coating death and no hiding what happened, so she uses the “D” word with honesty and gusto. She also uses humor, too, although it’s not the ROFL kind; instead, it’s humor of the sort that survivors use at the end of a crisis. And that, as she shows readers, is what you’ll be: a survivor, even though you’ll still cry sometimes.

This is not a book for raw widows or widowers, but they’ll want it eventually; it’s a little irreverent, but it’s just what they’ll need, in time. Indeed, life sometimes stinks – but “The Hot Young Widows Club” absolutely does not.

“Kidnap: Inside the Ransom Business”

It’s big enough to easily fit one oversize suitcase and two roll-ons. You’d have room for two golf bags and two overnighters; or a mid-size tent, sleeping bags, and a cooler. Your trunk is also big enough for you to lie bound and blindfolded inside, and in “Kidnap” by Anja Shortland, you’ll see how to avoid that.

In the movies, it always happens fast: someone is snatched and the hostage-takers call within minutes to ask for millions of dollars in ransom.

But no surprise: kidnapping, says Anja Shortland, is nothing like that which pop culture portrays. Based on what she knows in her work as a World Bank adviser and Somali piracy expert, Shortland shows that, in most cases, kidnapping is a civilized affair that takes deep planning on both sides.

Kidnappers, for instance, often work under a main organization that considers logistics, and monitors who is being snatched and who’s paying not to be snatched, through preset fees that come either from an individual or a corporation. This serves to self-monitor the situation and to discourage “rule-breaking” and rogues.

As for the kidnapped employee, you may not be informed about the steps your business has taken on your behalf. Risk managers who specialize in danger assessment may have been hired and consultants may be involved. Almost certainly, if there’s an insurance policy, Shortland says that it’s likely to have been underwritten by Lloyds of London and you won’t be told about it. If the worst happens, professional negotiators may be hired but that could be a moot point if everybody’s already agreed on the ransom fee. Of course, though, things could go awry, especially if you have bodyguards involved, but that’s a whole different chapter.

The good news is that the vast majority of “insured people working, travelling, and living in kidnap-prone areas” are not, statistically, in much danger. Over the last four decades, just over 2,000 people have reportedly been kidnapped.

That’s a low number – unless one of them is you…

Generally speaking, you probably don’t think of crime in the way that author Anja Shortland portrays it here, as a business that operates eerily similar to the one where you toil. In “Kidnap,” though, she offers compelling evidence as proof. Readers can certainly expect plenty of eyebrow-raisers in this, and in learning that kidnapping is quite often manageable, much like a retail store.

And yet, this book isn’t all comparisons because there is no comparing danger and murder to your quiet office. Indeed, Shortland is quick to point out that, though 90 percent of all kidnaps end well, things can go wrong – which leads to a sobering few pages on negotiation and the price of a life.

It’s probably safe to say that you are not going to be kidnapped today. Tomorrow’s probably a good bet, too, but why take chances?  “Kidnap” will open your eyes, and it could help you keep both feet square on the ground.

“Girl in Black and White”

Water stains and tattered edges. It was a shame that that happened to the picture you found, though those wounds give it dignity. You have no idea who’s in the snapshot; you just know that someone wanted to remember a moment in time – or, as in the new book “Girl in Black and White” by Jessie Morgan-Owens, someone wanted to spark change.

If you didn’t know the whole story behind the daguerreotype, you would think it was just an image of a charming, anonymous little girl, circa 1855. 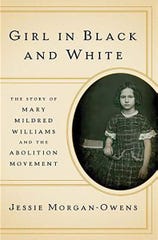 And you’d be half right. Its story starts in 1808 when Virginia widow Conney Cornwell dealt with a thorny issue: her fifteen-year-old daughter, Kitty, became pregnant by one of Conney’s slaves and, ignoring possible ruination of the family’s reputation, Conney kept the baby they named John. Though he was technically free due to matrilineal laws, John was raised in the slave quarters by Conney’s slave, “Prue,” until he was 16.

In 1825, when Conney fell ill, she did something that she hoped would ultimately protect Prue from enduring the heartbreak of separation from family: Conney left Prue to John in her will. Also included were Prue’s children and future grandchildren – and there would be many, most fathered by white men of power.

The problem was that John’s whereabouts were unknown when Conney died, and there was a battle for her estate; in the meantime, Prue gave birth to more children, as did her children. Through complicated circumstances, one of them, Prue’s very light-skinned granddaughter, eventually caught the eye of anti-slavery Massachusetts Senator Charles Sumner, who knew that white audiences would be interested in her story and the horrors that might befall her as a black child who looked white. He wanted to show her to his abolitionist supporters and to opponents.

Much as you’ll be interested in Mary’s story, too, “Girl in Black and White” may be a challenging way to get it.

While it’s good that a major chunk of the first part of this book is a Genesis-like account of begetting and ancestry, that soon devolves into court cases and courtroom wranglings that may be hard to follow for all but the most legal-minded readers. Author Jessie Morgan-Owens valiantly offers some help with this and she includes plenty of fascinating side-stories on mid-1800s culture, photography, abolition, and attitudes, but there’s still a lot to take in, especially if you’re not prepared for it.

Take that as fair warning because, despite its depth, you’ll have a hard time tearing yourself away from the small stories Morgan-Owens offers inside the larger account: tales of everyday life, helpful celebrities, and Mary’s final days in what may have been a “’Boston Marriage.’”

Perhaps the best advice is to give yourself plenty of time to digest and plenty of room to back-page while reading “Girl in Black and White.” Do that, and you’ll be fine; without space to contemplate, though, it may leave your brain a little tattered.