Bookworm: More ‘Sex in the City,’ the struggle and the fight

Dance club or intimate restaurant? He picks you up, or you meet him there? Fine dining, quiet walks, an adventure outing or all of the above?

Bookworm: More ‘Sex in the City,’ the struggle and the fight 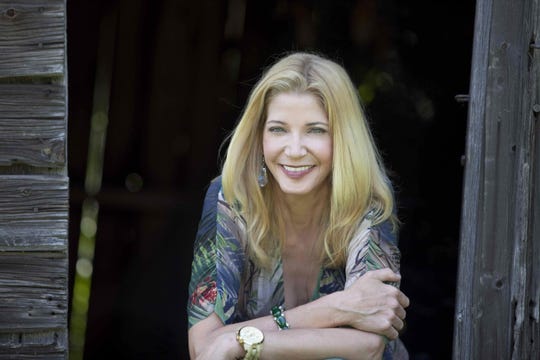 “Is There Still Sex in the City?” author Candace Bushnell.  (Photo: Photo by Patrick McMullan)

“Is There Still Sex in the City?”

Dance club or intimate restaurant? He picks you up, or you meet him there? Fine dining, quiet walks, an adventure outing or all of the above? Ach, since the last time you tried having a relationship, everything’s changed but nothing has. On second thought, as in the new book “Is There Still Sex in the City” by Candace Bushnell, maybe you’ll just stay home tonight.

Though, famously, Candace Bushnell loved New York very much, her ardor began to cool after the deaths of her dog, her mother, and her marriage in quick succession. As she scrambled to keep from losing her apartment, too, she realized that it was time to move on, literally, so she found a farmhouse on the edge of the Hamptons and settled in with two poodles, to enjoy middle-age. 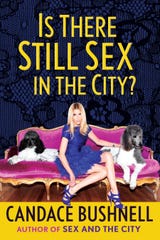 “Is There Still Sex in the City?” by Candace Bushnell.  (Photo: Grove Press)

She was not – absolutely not – ready to date again.

Neither were nearby friends Sassy, Queenie, Marilyn, Kitty, or Tilda Tia, although the occasional one-and-done wasn’t completely off the table. No, they’d gotten divorced, gamed, had their hearts fractured, and they eyed relationships with near-total suspicion. It was painfully obvious that dating at almost-60 would be far, far different than it was at almost-25 – and men were different, too.

Bushnell tried biking with Tilda Tia because it seemed like a good way to meet men, but strawberry vodkas were better on a hot day. She tried Tinder and learned that while it was addicting and perhaps even confidence-boosting, even men knew that men only wanted one thing from it. She took a long look at “cubbing” (dating much younger men) and other ways to prepare to dive into the dating pool again, and she went through her very own MAM (middle-aged madness), as she says most women do. She dated much older men before deciding that it wasn’t her ideal situation.

And then! Bushnell got her own MNB (my new boyfriend) and it was good. He was not a creep or a SAP (senior-age player). Happily, he showed her that sex wasn’t the only thing found in the city or outside it …

The break-up left you stunned, but now you’re healed, ready, and you’re putting on a good date-face. Maybe.

Maybe you should start with “Is There Still Sex in the City?”

In a half cautionary tale, part Girlfriends Manifesto, and part reportage from what may forever be a battle of the sexes, author Candace Bushnell offers advice to women in the middle of middle age and those suddenly single again. Yes, it’s funny and yes, there are tales in this book that will make you shake your head but the best takeaway is the back-patting feel of camaraderie. Second-best: there are happy endings.

Third-best: not everyone gets one, even the second time around.

More: Bookworm: Footprints in the sand; beginning the end

“Is There Still Sex in the City?” answers its own question with an emphatic YES! and that could be the right balm for any woman, but particularly for those over 50. If that’s you and you can handle the occasional profanity, this is a book you won’t mind taking out.

“A Fist for Joe Louis and Me”

Your teacher says “no fighting on the playground.” No pushing, no smacking and definitely, no hitting. It’s not nice, he says. That’s what bullies do, you know. But as you’ll see in “A Fist for Joe Louis and Me” by Trinka Hakes Noble, illustrated by Nicole Tadgell, sometimes fists and gloves equals a fistful of friendship.

More: Bookworm: The King and his court; upwardly mobile

It was the best of traditions: every Friday evening, right after work, Gordy’s dad gave Gordy boxing lessons. After that, they’d eat dinner together and listen to the fights on the local radio station. It was especially good when Joe Louis was in the ring. 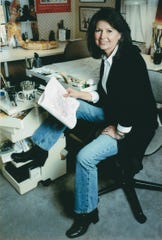 But then “times got hard,” people started talking about Germany, and Gordy’s dad lost his job. The Friday night tradition stopped for a while, and Gordy’s mom had to take in some tailoring to pay for the family’s groceries. One night, when Mr. Rubinstein, whose family left Germany to escape the Nazis, stopped to drop off the work, his son, Ira, came along. That was when Gordy learned that other kids admired Joe Lewis, too.

But Ira didn’t know the first thing about boxing! He didn’t even know what “dukes” were, so Gordy had some teaching to do. Every time Mr. Rubinstein dropped off some work for Gordy’s mom, Gordy and Ira practiced boxing out in the alley. Gordy taught Ira how to keep from getting hit too hard and they had fun pretending. They even made up boxing names for themselves.

Weeks later, that practice and pretend came in handy when a real bully came after Ira. Gordy stepped into the fray because he knew Joe Louis wouldn’t let Ira fight alone but hitting someone in anger made him sick.

Was that how Joe Louis felt? That evening, Ira and his father came over to listen to Joe Louis versus Max Schmeling on the radio. For years to come, it would be called The Fight of the Century but in the end, it wouldn’t last long: just a little over two minutes.

Its effect on two little boys, however, would last for many years …

Considering all that’s happened in the recent past, “A Fist for Joe Louis and Me” couldn’t be more timely. 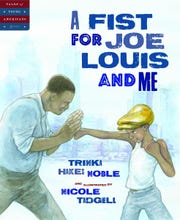 “A Fist for Joe Louis and Me” by Trinka Hakes Noble.  (Photo: Sleeping Bear Press)

Using as a backdrop an event that made history nearly 90 years ago, author Trinka Hakes Noble tells a story of a young African American boy and his friendship with a Jewish boy. It’s a tale set during the Depression when anti-Semitism and racism made poverty seem a little bit sharper but Noble’s characters don’t complain; instead, they face problems together, which leaves behind the idea that we can find common ground and mutual interest, if we’re open to them. That, and artwork by Nicole Tadgell, make it an appealing message for any age.

This book is meant for grade-schoolers but be sure to go over the author’s note with your child, found at the end. It adds meaning to the story inside “A Fist for Joe Louis and Me” and it makes this a book your child will fight to own.