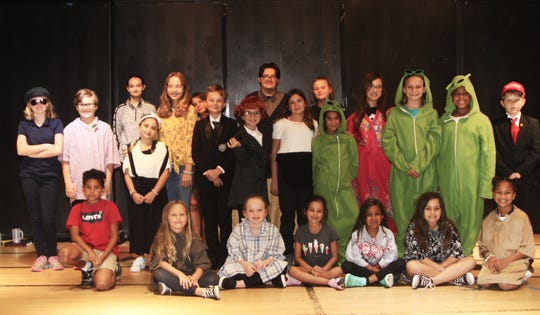 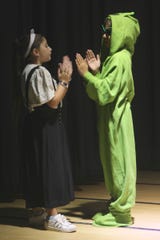 In the end, the play's message is that despite differences, we should all get along together. (Photo: Photo provided)

Each year as part of the YMCA of South Collier (Marco YMCA) series of summer camps, Sisbarro takes just one week to take a group of young actors from first read of a script through to a performance in front of a live audience.

"The play was cast by Monday afternoon (on the first day), and it was full steam ahead with theater games and learning the elements of theater in time for a Saturday performance," Sisbarro said.

“The only difficult part was to keep the cast from laughing and playing it straight on stage. Sometimes it’s difficult to decide who had more fun; us or the audience."

Aliens and townsfolk participate in a news conference after the aliens are discovered to be harmless.  (Photo: Photo provided) 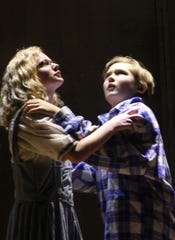 Two picnickers react in horror when they realize aliens are on the way to the quiet town. (Photo: Photo provided)

The play was Stephen Frankenfield's "The Day Aliens Attacked Fairfield," a comedy set in a town where nothing ever happens. Biggest news in the past decade, for example, has been one of the town's youngsters suffering from a paper cut.

When three lost aliens materialize in the town, the reactions are mixed – from fear to fascination – but it eventually plays out positively, delivering the message that hey, tolerance is OK in this modern world.

Along the way, the president and his entourage become involved, and the entire cast of about 20 all have spoken lines.

During rehearsals, Sisbarro played the typical director, at times bellowing at her cast (with a twinkle in her eye, of course) and at other times praising them for a job well done.

Watching the dress rehearsal, one had the feeling that a play like this might indeed justify a limited later run at the Marco Players Theater, for example.

The kids really were that good.

Check out the YMCA for the Fall theater line up from the Sisbarro Acting School.  Aside from the regular fall, winter play, the studio has added “We -Theater” for ages 4 – 5, and Shakespeare for kids for elementary and middle school.