Bookworm: History in the making

Three months from now, you’ll be making a list and checking it twice.

Bookworm: History in the making 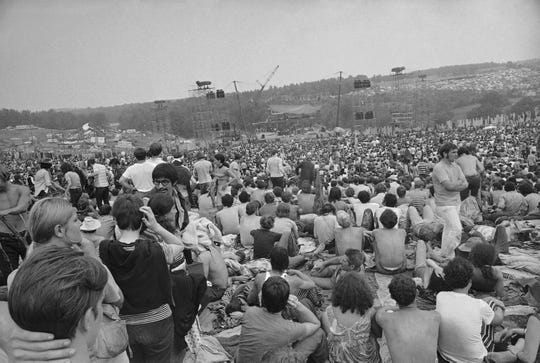 The Woodstock Music & Art Fair, held from Aug. 15-18, 1969, seemed to encapsulate the zeitgeist of the 1960s and define a generation. Some people view Woodstock through rose-colored glasses, remembering the event as “3 days of peace and music” (actually four) and the dawning of an aquarian age. Some look askance, recalling only chaos, mud, traffic and unfettered drug use. People of a certain generation know who was there: Jefferson Airplane, Jimi Hendrix, Janis Joplin, Creedence Clearwater Revival and The Who were some of the luminaries among the 32 acts at Woodstock. But a list of those who weren’t there, for whatever reason, is just as interesting. 24/7 Tempo has compiled a list of artists who never got to Woodstock. (Photo: Associated Press)

Though it finally happened in 1969, America’s plan to put a man on the moon began some 28 years earlier, when Vannevar “Van” Bush went to work for Franklin Roosevelt’s Office of Scientific Research and Development. Under Bush’s leadership, America made significant strides in technology and weapons of war, and Bush himself envisioned a future with a device we’d recognize as a computer. As for long-range rocketry, though, he thought it “would not be technically feasible.” 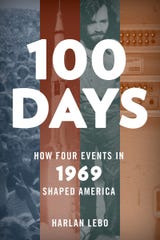 A little more than two weeks later, America would have what Lebo calls “One week of the darkest and the brightest.”

For years, the counter-culture had been gaining strength and society had rapidly changed, thanks to “Americans under 25 years old.” Long hair replaced crew cuts; “suits and wingtips were replaced by jeans and sandals”; and young people, unhappy with their parents’ lifestyles, adapted lifestyles of their own making.

It was a situation that Charles Manson took full advantage of, as he gathered followers who ultimately did his bidding by murdering seven people in the Los Angeles area on the nights of Aug. 8-9 and 10. 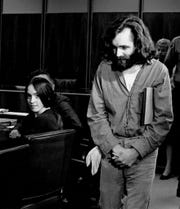 In this Oct. 13,1970 file photo, cult leader Charles Manson walks into the courtroom as Susan Atkins, a member of his family of followers, looks on in Santa Monica, Calif. (Photo: AP Photo/File)

Hollywood was terrified, as were most older Americans but the country’s youth likely noted the murders and moved on, literally: 500,000 of them were headed for a farm in upstate New York, where a three-day concert was being held August 15-17, beginning with a prayer by Sri Swami Satchidananda and ending with a blurry-eyed Jimi Hendrix on guitar.

Little did those concert-goers know that, six weeks later, something would happen that’d someday allow music to be portable: a grad student at UCLA noted that his university’s computer connected with a staff member’s computer.

You know how it goes: one thing leads to another. In “100 Days,” author Harlan Lebo shows that phenomenon in history, by laying out a short timeline of the summer of ’69 – starting in 1941.

Going that far back is necessary to completely understand the significance of the first event, the start of a summer that’s been the subject of a lot of books this year. What sets this apart from others, however, is that Lebo looks closer at then-major names and at the everyman players, both who had pinky-fingers on what happened. These are the people who were almost headline-makers, who had remarkable front-row seats before slipping back into the crowd.

More: Bookworm: More ‘Sex in the City,’ the struggle and the fight

History doesn’t always recall those bit-players; Lebo does, and that’s where readers will find the best parts of “100 Days.” There’s why you’ll want to check this book on your list. 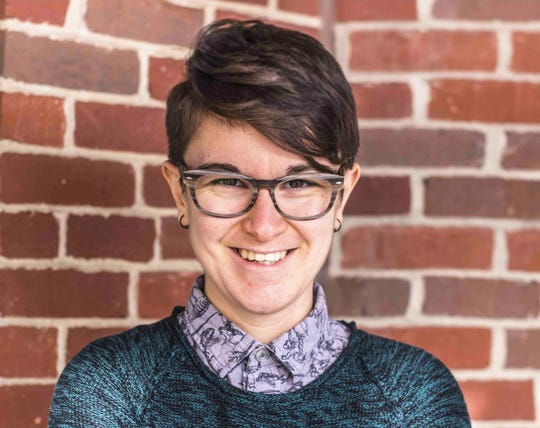 He’s not moving his lips. He’s not moving much except his hands, in fact, which is how the puppeteer makes the puppet dance.  A pull here, and you forget about the strings when the plastic-and-fabric comes alive. A dip there, and you forget about the man behind the wisecracking, smart-talking doll. A grin, as in “The Ventriloquists” by E.R. Ramzipoor, and you don’t see where the words come from.

She was odd, they said, which was exactly why Eliza wanted to talk with her: for twelve years, Eliza’d been looking for someone to finish a puzzle that started with her birth. Surely, this woman was that person. 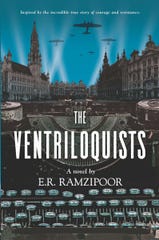 As it happened, the woman, Helene, had been waiting to tell a story …

Once, she began, she was a twelve-year-old boy called Gamin, a name Marc Aubrion had given her because he didn’t know the truth. Like many war orphans, Gamin was selling newspapers to survive when they met, and Aubrion liked her pluck. It was months before he knew that Gamin-the-boy was Gamin-a-girl, but it mattered little by then.

Everybody on the street knew who Marc Aubrion was. He was handsome, jovial, a jester, a writer who’d sworn allegiance to the resistance, widely admired by everyone but the Nazis. No, the Germans didn’t admire Aubrion, but they know how useful he’d be.

To make the Belgians believe that the Allies were the enemy, the Nazis wanted to create “black propaganda” by using popular writers in a popular underground paper, La Libre Belgique. Aubrion, along with a professor, a prostitute, a pressman, and a saboteur would make that happen, with the help of a Jewish counterfeiter the Nazis owned, or they would all die.

They knew they’d die anyhow. And so, they planned a joke.

Before you start reading “The Ventriloquists,” pick up the phone. Let the office know you won’t be in tomorrow. Nope, you won’t be able to work after being up all night with this incredible novel.

And yet, it doesn’t start out that way.

It’s a struggle to get inside this World War II story of bravery and audacity: author E.R. Ramzipoor lets it unfold over the course of weeks-within-years, through the eyes of a child grown older and a multitude of characters, some of which are unbearably similar. That, and the occasional snippet of German or French, creates challenges that shouldn’t last: because of the length of this novel, you’ll have time to sort things out.

Once you’ve gotten your bearings, though, Ramzipoor snatches them away. This story is dark, like a constant, rainy November in a gray, crumbling town, the only light coming from the spark between the characters. That can sometimes make you smile, or give you a spit-your-coffee-laughing moment. It can also make you wince and weep.

Inspired by a true story, this tale is a mile wide, just as deep, and unforgettable. Truly, if you’re looking for something to kick off your fall reading, “The Ventriloquists” should be on your lips.

More: Bookworm: Footprints in the sand; beginning the end