The chair you now sit in was once occupied by someone else. You are the second or fifth or 44th to hold the job but get ready.

The chair you now sit in was once occupied by someone else.

You are the second or fifth or forty-fourth to hold the job but get ready: in this position, everything you do is critiqued and measured against your predecessors and there is no playbook. Also know that, like in the new book “Melania & Michelle” by Tammy R. Vigil, you have some big pumps to fill.

More: Bookworm: A rock legend and a parade of monsters

As in the aftermath of nearly every Presidential election in American history, in January 2017, comparisons were made between the outgoing First Lady and the incoming one. Fair or unfair, such study happens with every new administration and while everyone knew that Mrs. Obama and Mrs. Trump were different, there were many similarities – more so, says Vigil, “than their public personas seemed to indicate.”

Both, for example, “were raised in less comfortable environments than their forerunners,” politically and economically. Both women aspired beyond politics: Obama, like predecessors Hillary Clinton and Laura Bush, received a college degree; like Nancy Reagan and Betty Ford, Trump worked in “image-oriented industries” and eschewed college. Despite that Obama and Trump had each enjoyed some amount of fame prior to their husbands’ runs for office, both had to learn to manage their new and very unfamiliar positions.

Of course, both were harshly critiqued for their time as First Ladies, by the public and by the media. Their marriages were scrutinized and their roles as mothers were closely watched. Gaffes were magnified; platforms were ridiculed. Even their choice of fashion was cause for negativity and yet, both were role models for young women and girls both in dress and in the poise, they’ve displayed.

As for the next FLOTUS – if there is one – she will likely have the same struggles, scrutiny, and expectations to meet, as has each First Lady for more than 200 years. This, for a position for which she’ll be required to forge her “own unique path” in a job she didn’t necessarily ask for and doesn’t get paid.

Apples or oranges?  When it comes to First Ladies, it almost seems wrong to compare them since they’re all so unique. Even so, author Tammy R. Vigil does it in “Melania & Michelle,” and the side-by-side is pleasantly surprising.

Indeed, Vigil’s book is one of the more balanced on this topic, examining the work of both Obama and Trump with a non-sensational, nonpartisan voice that remains honest and doesn’t hide anything, and a willingness to retrieve lessons from past administrations as examples. In detail, Vigil also shows why a thick skin is necessary for the spouse in the White House; and then she flips the script, showing how, if a FLOTUS ever decides to opt out and stay home, she’d have history behind her.

More: Bookworm: A tale of segregation, war, racism, and horror

No doubt, “Melania & Michelle” is perfect for anyone interested in politics but it will also appeal to the reader who wants a behind-the-scenes of a job that only a select few will ever hold.

Check it out. It’ll keep you in your chair.

“The Ultimate Guide to the 2020 Election”

You’ve had your eye on the debates. Really, though, you know how you’d vote if the election were tomorrow. You know who you want to see in office, although you wish things were a little different: like most of your fellow Americans, you wish everybody’d just work together for once. But if you read “The Ultimate Guide to the 2020 Election” by Ryan Clancy & Margaret White, you’ll see that there’s hope.

Left over here. Right over there. Ever since America became a country, it’s been that way, but things seem more polarized than ever lately. In the past, we somehow eventually ignored the politics, united, and got stuff done. Clancy and White, from the organization No Labels, say that kind of compromise is possible again. 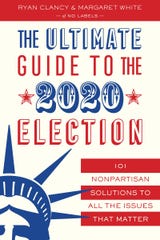 So why don’t we automatically compromise to begin with?

According to Clancy & White, the political system today is such that candidates have little impetus to do what most Americans want. They just need to appeal to their base, which consists of those who’ll reliably show up at elections. Putting offices in the hands of a small number of people pulls us further apart; the only thing to do, they say, is to push us back together.

The way to do it is through understanding and compromise.

Health care, climate change, immigration, and gun ownership are but a few of the toughest issues, and within each larger issue are smaller problems of concern. This book

explains the basic stances of Left and Right, followed by solutions that each side can feel comfortable with. Health care, for example, needs to rein in costs, and there are ways to borrow ideas from both sides to do it. In the chapter on climate change, we see why it’s not easy to be green. The pages about immigration explain how the system works before laying out the fixes. Overall, the authors say, there is no “all-or-nothing” way to get things done in government anymore.

Thinking otherwise is how we got into this situation and it must change.

Like many people, when you think “politics,” you brace yourself. Common sense isn’t always what you expect from the government, but you’ll find it inside “The Ultimate Guide to the 2020 Election,” and that’s rather soothing.

Indeed, there are many times when authors Ryan Clancy & Margaret White hit the nail square – especially in their short list of major issues. In narrative that’s neutral, plain, and simple, they offer explanations to make things clear, and then we get solutions that both political sides can live with. Furthermore, this book lists questions to ask the candidates if you find yourself in a situation to do so, and a place to take notes so you have all your info in one spot. It’s like having a debate that both sides win.

Whether you lean left or run right, “The Ultimate Guide to the 2020 Election” is for you but just don’t expect miracles. It’s totally helpful and completely commonsensical but as for changing minds, well, that’s debatable.

More: Bookworm: Getting ahead in business and life