Halloween is over this year, but not for you. Your decorations are still up because the season is young.

Halloween is over this year, but not for you. Your decorations are still up because the season is young. There’s plenty of time left for skeletons, monsters, and wind that howls like a banshee. You can still hear spirits high-stepping in your upstairs. Most important of all: as in the new book, “Toil & Trouble” by Augusten Burroughs, witches walk among us.

At just eight years old, Augusten Burroughs learned that he was a witch. Riding the bus home from school, he’d had the sudden realization that something happened to his grandmother; he knew without knowing, saw without seeing, and he rushed to his mother in a panic. Matter-of-factly, she calmed him; she was a witch, too, and had sensed that her younger son had the “gift.” 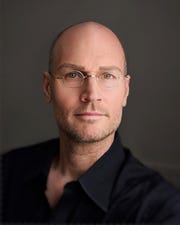 “It was the strongest bond my mother and I had when I was young … ” Burroughs says.

Most people think of Hollywood magic or crones on brooms when they think of witches but those are just myths, he says. The truth comes in three parts: witches have existed for as long as have humans. They’ve “always been misunderstood.” And yes, “witches are real,” and each is a little different, as Burroughs learned when his Aunt Curtis (a witch) introduced him to a root woman (another witch) who told him something about his future.

Witchcraft isn’t perfect, though. It didn’t help much while Burroughs was bullied as a boy. Sometimes, spells took longer to work than he hoped they might. It isn’t for revenge or hurtful purposes, although there is a way to influence how things turn out and patience is key. “Magick” worked when he wanted to move from Manhattan to his beloved New England; it didn’t work when he wanted to talk to a friend on the phone. It warned him of a possibly-bad situation near his new home, but there were no details. It helps find lost objects, but not lost confidence. 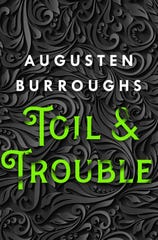 And when his magick went missing as his husband fell seriously ill, Burroughs learned that “Things are not as they appear. They are much, much more.”

When starting “Toil & Trouble,” you could be forgiven for thinking that author Augusten Burroughs is pulling your leg. He does, after all, write with humor and this witch stuff is conjured, right? Isn’t it?

After a few more pages, it won’t matter. You’ll be so engrossed by this tale of the magick of life and so caught up in the stories Burroughs tells, that witchcraft really becomes no big deal, no less normal than blue eyes or brown hair. And while it’s the main reason for this book and everything attached to it, it’s more of a magically delightful, meaningful backdrop for tales of family, growing up gay, falling in love with a man, finding home, and forgiving.

More: Bookworm: A rock legend and a parade of monsters

“Toil & Trouble” is not a dark-and-stormy-night kind of book, and it won’t make you jumpy. There are, however, a few hair-raising pages that’ll make you squirm but mostly, it’s funny and sweet and charming, a cauldron full of goodness.

“The Double Dangerous Book for Boys”

You’re stuck between seasons. Football is over, baseball hasn’t started. Halloween’s done, it’s not yet Thanksgiving, and Christmas is a lifetime away. Can this time of year possibly be any more boring? You need excitement. You need adventure! You need “The Double Dangerous Book for Boys” by Conn, Arthur & Cameron Iggulden.

More: Bookworm: A tale of segregation, war, racism, and horror

So, what are you going to do this weekend once you’ve run out of fun?  How about making more fun with the things in this book?  Learning to pick locks, for example, might be a good time and it may be useful someday. It’s one of the first few things you’ll find. 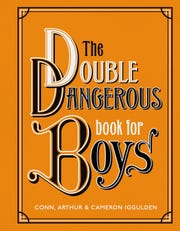 Or let’s say you must stay indoors. With this book, you can help around the house by learning the Japanese art of Kintsugi, which involves fixing broken items to make them better than new. Or learn how to cast things in resin, which is a different way of saving them forever. Be a smarty pants by knowing a few basics about laws and politics. Or earn some cash by being the best kid sitter around with recipes to try, games to invent, plus a paper box, a jumping paper frog, paper airplanes, and balloon swords to make.

If you can go outside, there’s plenty to do with this book. Know the rules for Ultimate Frisbee, for one. If you live in an area with snow, make an igloo that you can sleep in tonight. Impress others with your knowledge of wild birds. Make rubber band guns, or head for the garage and make a tool storage unit.

And because this is a book, there’s interesting reading inside “The Double Dangerous Book for Boys.” Read about American coins, Greek legends and mythology, and try a bit of poetry, just because. Learn about card games, and dangerous adventure stories that happened, and that boys like you will love.

Does this book look familiar to you?

It may; similar books by author Conn Iggulden were released thirteen years ago, and you might’ve enjoyed one yourself. But, Iggulden says “I thought… I’d covered everything in the first book, but there’s nothing like raising boys for surprising you.”

And thus, “The Double Dangerous Book for Boys” is all new and made mostly of the kind of material you might’ve found in boys’ magazines fifty years ago: things to make and do, games to play, and reading that teaches critical thinking and respect for the past. So far, so good… until you reach the very last chapter, which may serve as caution but that contains information on what isn’t in this book. That includes things that, indeed, can be found online but that parents still might think are astoundingly inappropriate for 12-to-16-year-olds; and dumb ideas that are described enough that they may just as well have been added.

Truly, as much fun as this book is, parents will want to think hard before giving it to the wrong kid. Read the last chapter of “The Double Dangerous Book for Boys” first and avoid a season of disaster.