More than 30 entrants, with a number featuring ensembles of two or three dogs, illustrated many different takes on Christmas tradition. 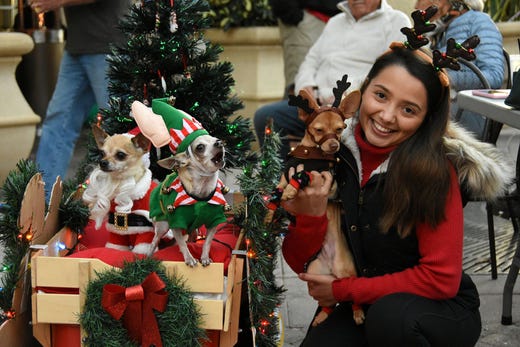 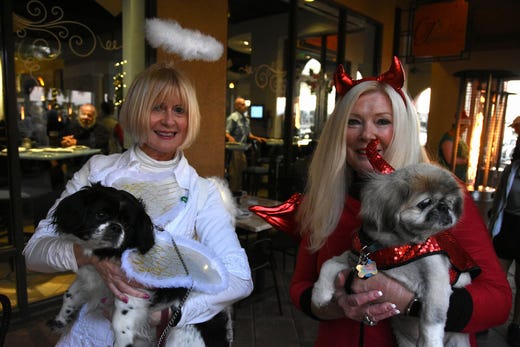 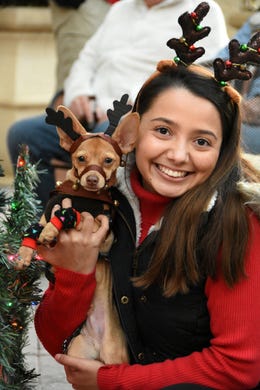 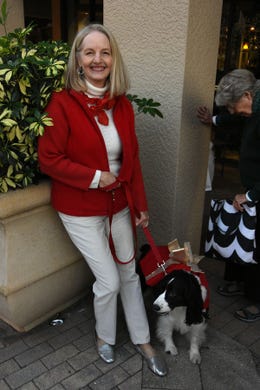 Pooches and their owners decked out in their best holiday fare during Tuesday's Canine Christmas Parade on Marco Island. Lance Shearer/ Correspondent
Fullscreen 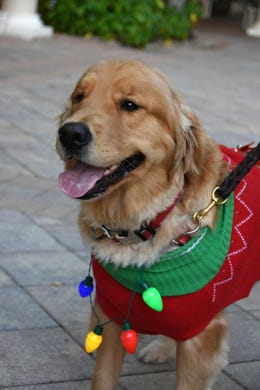 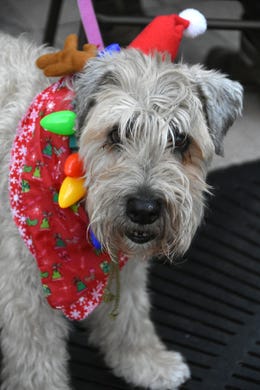 Christmas has gone to the dogs. A stream of costumed canines walked the red carpet on Tuesday evening at the Esplanade, with their owners matching the dogs’ holiday finery with themed outfits of their own.

More than 30 entrants, with a number featuring ensembles of two or three dogs, illustrated many different takes on Christmas tradition. Emcee Stan Niemczyk shepherded the contestants as each took their turn on the “catwalk,” competing in categories of “Most Festively Dressed,” and “Most Creative or Funny.” Volunteer judges Neil Snyder, Melissa Scott, and Wanda Day took and compared notes as the parade of pooches passed. All have years of experience in their roles, having served in these capacities for years.

With dozens of dogs parading in fashions that included funny hats, jingle bells, wings, spectacles and electric lights – and you know this was in no way the dogs’ idea – the pooches played peacefully, with no instances of dogfights marring the occasion. 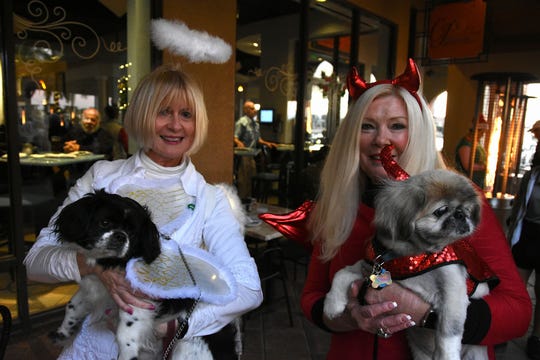 The weather, for Marco Island, was seasonably cool, rendering the costumes more comfortable than they would be on the warmer evenings that prevailed until recently. Keeping the costumes on the dogs and properly placed was a continual preoccupation for their handlers, and quite a few “wardrobe malfunctions” necessitated a last-minute adjustment, even as they were called for their turn in the spotlight.

The Best Dressed category went to Linda Hollander, with her Yorkshire terriers Oliver and Stella. They were impressive, but Hollander, like many of the owners, put at least equal attention into her own outfit, showing up as an illuminated Christmas tree.

In the creative/funny competition, the winner was the Condee family, for a three-dog extravaganza featuring chihuahuas Radar and Mia in a tree-bedecked wagon, and chihuahua-dachshund mix Roo, held by Mariana Ruiz-Vallejo, caparisoned as a reindeer. Second place went to Cathy Bresson with Buddy and Yolanda Medwid with Brady, with both dogs and humans portraying “nice” and “naughty” respectively. Third went to Magdalena Rozio, who had a very impressive set of toy canines in her own mouth, and her dog Soprano as Dracula.

How do costumed dogs fit into Christmas festivities? Asked the question, Christmas Island Style chairman Steve Stefanides said it comes down to family.

“These dogs are these peoples’ family and Christmas is all about family,” Stefanides said. “For a lot of people, their dogs are their connection to the world.”

Upcoming Christmas Island Style (CIS) events include the tree lighting on Dec. 7, and on Dec. 14, Cookies and milk with Santa, followed by the CIS street parade. For complete information, go to www.christmasislandstyle.com.