New York Times best-selling author Randy Wayne White has created one of suspense fiction’s most enduring heroes with marine biologist Doc Ford. His audience and reputation only continue to grow, and through him, hundreds of thousands of readers have been introduced to the secrets of Florida’s natural wonders and history. 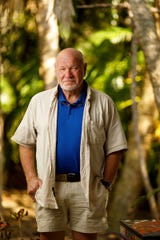 His latest, “Salt River” will be released on Feb. 11 and White will be on Marco Island at 2 p.m., that day, at Sunshine Booksellers, 677 S. Collier Blvd., to speak and sign books.

“Salt River” celebrates the highly-anticipated 26th book in the acclaimed bestselling series. In this latest high-stakes adventure, Marine biologist and former government agent Doc Ford is sure he’s beyond the point of being surprised by his longtime pal Tomlinson's madcap tales of his misspent youth. But he's stunned anew when avowed bachelor Tomlinson reveals that as a younger man strapped for cash, he'd unwittingly fathered multiple children via for-profit sperm bank donations.

More: Bookworm: The D-word and the golden years

Thanks to genealogy websites, Tomlinson's now-grown offspring have tracked him down, seeking answers about their roots, but Doc quickly grows suspicious that one of them might be planning something far more nefarious than a family reunion.

Since his first Doc Ford novel, “Sanibel Flats,” came out in 1990, White has become one of the most popular thriller writers in the nation. An outdoorsman, raconteur, journalist and former fishing guide, he has been stabbed, “shot at with intent,” and was in a hotel that was blown up by Shining Path anarchists in Peru.  As a columnist for Outside magazine, he covered the America’s Cup races in Australia, went dog sledding in 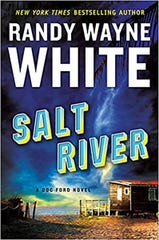 Alaska, searched for wild orangutans on Borneo, brought back refugees from Cuba, dove in the infamous Bad Blue Hole lake on the desolate Cat Island in the Bahamas, and even participated in a mission to steal back General Manuel Noriega’s bar stools.

White has more than 50 books to his credit, including crime fiction, adventure tales, cookbooks, and travel accounts. In 2019, White was honored with the Florida Lifetime Achievement Award for Writing sponsored by The Florida Humanities Council and awarded to “recognize divergent writers who have introduced Florida culture and history to a wide audience.”

White has been awarded the Conch Republic Prize for Literature, as well as the John D. Macdonald Award for Literary Excellency.  In 2009, Randy was elected an American Fellow by The Explorers Club, New York City. In 2011, White was named a Florida Literary Legend by the Florida Heritage Society.

In 2002, a one-hour documentary film called The Gift of the Game, about White's trip to Cuba to find the remnants of the Little League teams founded by Ernest Hemingway in the days before Castro, won the "Best of the Fest" Award from the 2002 Woods Hole Film Festival, then was broadcast by PBS in 2003. White is also a co-founder of Big Brothers in South Florida.

White lives on Sanibel Island, Florida, where he was a light-tackle fishing guide for many years, and spends much of his free time windsurfing, playing baseball, and hanging out at Doc Ford’s Rum Bar & Grille.