Megyn Kelly called on the network to allow for an outside investigation into network's handling of Matt Lauer sexual misconduct allegations.

Megyn Kelly Wednesday called on NBC to authorize outside investigations into the handling of sexual misconduct accusations against "Today" show host Matt Lauer, who was fired in November 2017.

Kelly, 48, on Fox News' "Tucker Carlson Tonight" in her first interview since parting ways with her former network in January, addressed the Lauer controversy that was rekindled with this month's release of Ronan Farrow's book, "Catch and Kill."

Kelly said NBC's internal investigation, which concluded that network executives did not know about allegations of sexual misconduct against Lauer prior to November 2017, should be subjected to independent scrutiny from an outside law firm, as other networks have done in the face of misconduct allegations.

"The question is open to whether they put dollars ahead of decency. Were they more interested in protecting their star anchor over the women of the company?" said Kelly. "There needs to be an outside investigation in this company. They investigated themselves, that doesn’t work." 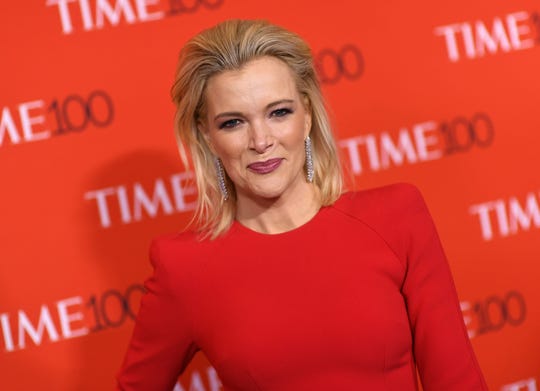 During the interview, Carlson showed a clip of Kelly recommending an outside investigation during her own hour of "Today." Kelly arrived at NBC in 2017 to great fanfare and a huge contract, but her show was canceled in October 2018 a few days after she defended the use of blackface for Halloween costumes as part of her show.

Farrow claims in "Catch and Kill" that movie mogul Harvey Weinstein threatened to expose Lauer if NBC ran Farrow's ongoing investigation into him, leading the network to halt the reporting. Farrow left NBC and published the bombshell Weinstein story months later in The New Yorker, later winning a Pulitzer Prize for his reporting.

NBC president Noah Oppenheim rejected Farrow's claims in a memo, writing that the story was held up because Farrow had "no victims or witnesses on the record" in the piece.

Responding to Oppenheim's account, Kelly Wednesday said: "If that’s true, and if there’s nothing to hide, get an outside investigator."

She added that NBC should release any complaints made against Lauer and any confidential settlements or payments made prior to the first public accusation.

"That’s what we need to know. They haven’t gotten specific about what money has been paid out to whom. Show us the money," said Kelly. "The No. 1 thing that needs to happen is they need to release any Matt Lauer accusers from confidentiality obligations. NBC says it has nothing to hide. Great. Let’s not hide anything."

Matt Lauer host of the Today Show speaks with Republican presidential candidate Donald J. Trump during an appearance on a NBC Town Hall during a broadcast of the Today Show in Rockefeller Plaza in New York, New April 21, 2016. PETER FOLEY, EPA-EFE
Fullscreen

Matt Lauer has been fired from NBC for "inappropriate workplace behavior," the network announced on the 'Today' show Wednesday. Take a look back at Lauer's TV career, from the 'Today' show and beyond. Nathan Congleton, NBC
Fullscreen 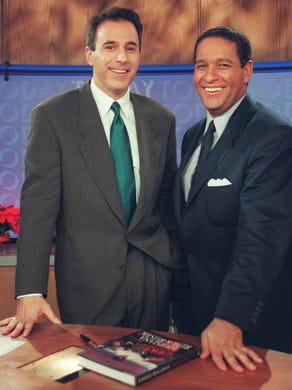 Lauer joined 'Today' as the news anchor in 1994. As widely anticipated, he was tapped to replace Bryant Gumbel, right, as co-anchor of the top-rated morning program in December 1996. Richard Drew, AP
Fullscreen 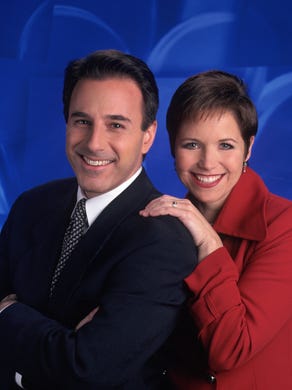 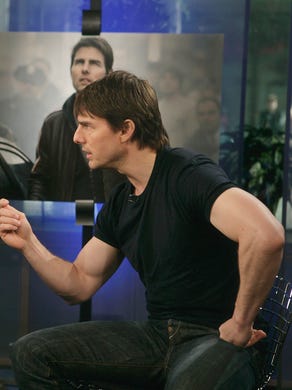 Lauer got into a heated debate with Tom Cruise, the world's most famous Scientologist, during a June 2005 interview when he broached the topic of the church's stance on psychiatry and antidepressants. VIRGINIA SHERWOOD, Virginia Sherwood, NBC via AP
Fullscreen

Lauer was next to Couric on April 5, 2006, as she announced she would leave 'Today' for 'CBS Evening News,' where she became the first female solo network news anchor in history. LISA BERG, AFP/Getty Images
Fullscreen 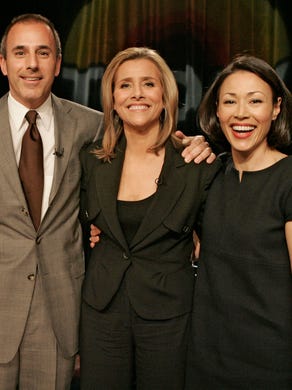 Lauer frequently tag-teamed with 'Today' weatherman Al Roker for the show's annual Halloween episode. In 2006, they adopted a 'Pirates of the Caribbean theme,' with Lauer dressed as Capt. Jack Sparrow and Roker as Davy Jones. They're joined her by Ann Curry, Meredith Vieira and Natalie Morales. RICHARD DREW, AP
Fullscreen 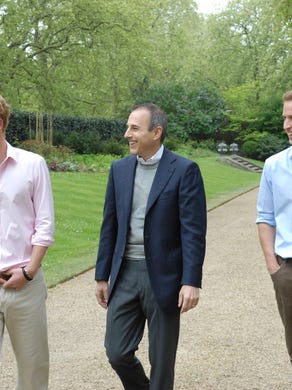 In May 2007, Lauer scored an interview with Princes Harry, left, and William. Here, they walk the grounds of Clarence House, where the princes lived with their father Prince Charles in their teens and early 20s. Jeff Overs, AP
Fullscreen 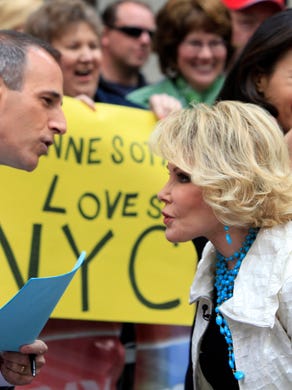 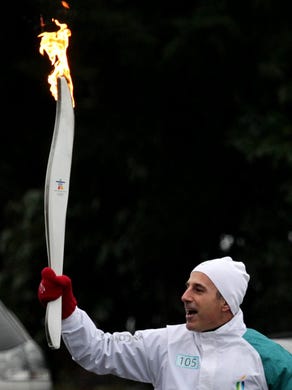 Because NBC is the longtime home of the Olympics, Lauer got to participate in the torch relay ahead of the 2010 Vancouver Winter Games. Here, he runs with the torch in in Burnaby, British Columbia, in February 2010. DARRYL DYCK, AP
Fullscreen

Lauer interviews snowboarder Shaun White, one of the breakout athletes of the 2010 Vancouver Winter Olympics, hours after after his gold medal performance on the halfpipe. Denny Gainer, USA TODAY
Fullscreen 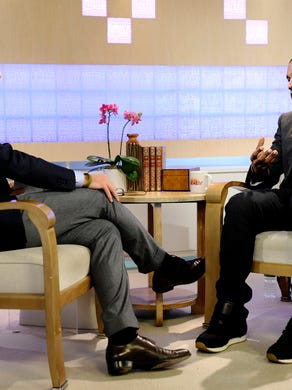 Lauer rides comedian Jim Carrey after a segment of fathers who horse around with their kids on a 2011 'Today' show episode. Peter Kramer, AP
Fullscreen

The 'Today' crew bade farewell to another host, this time Meredith Vieira, on June 8, 2011. Afterward, Ann Curry finally graduated to the anchor chair, which she held for less than a year. Richard Drew, AP
Fullscreen

Lauer looks on as Ann Curry, who graduated to co-host following Meredith Vieira's departure in 2011, tearfully announces her own exit on June 28, 2012. Curry was largely blamed when 'Today' fell behind ABC's Good Morning America' in the ratings. NBC
Fullscreen 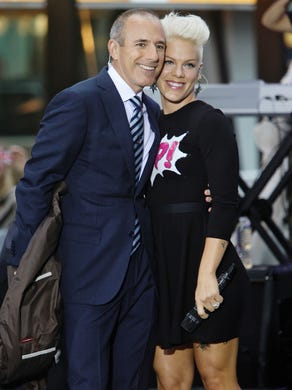 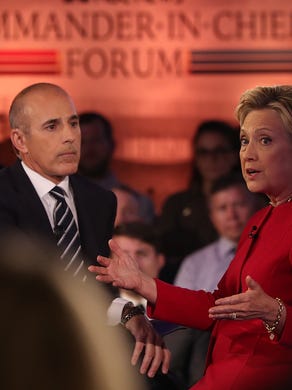 In 2017, Lauer went in drag as Dolly Parton for what would be his final 'Today' Halloween episode, with Savannah Guthrie as Kenny Rogers. Charles Sykes, Invision/AP
Fullscreen 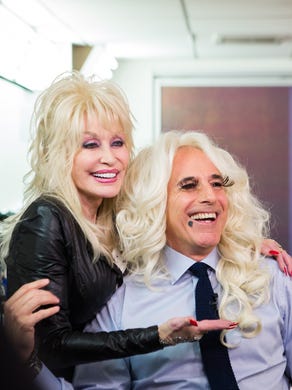 Luckily for Lauer, he had the genuine article to consult on his Halloween costume. Nathan Congleton, NBC
Fullscreen

Lauer hams it up with the 'Today' puppy, Charlie, dressed in Yankee pinstripes during the 2017 baseball playoffs. Nathan Congleton, NBC
Fullscreen 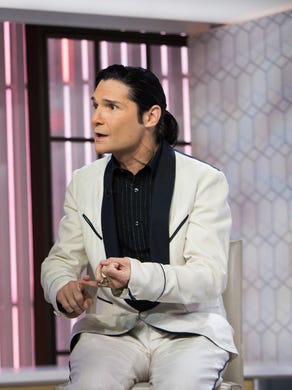 Two weeks before his firing, Lauer interviewed former Vice President Joe Biden, who was promoting his book, 'Promise Me, Dad.' While in office, he was the Obama administration's point person on preventing sexual assault. NBC, Nathan Congleton/NBC
Fullscreen

Lauer spoke often of his alma mater, Ohio University, visiting the campus on-air and delivering the commencement address after he finally finished his undergraduate degree in 1997. Lauer recently welcomed the school band, the Marching 110, to the 'Today' plaza on Nov. 22, the day before the Macy's Thanksgiving Day Parade. "We've been hearing about this all week," co-host Savannah Guthrie told the band. Nathan Congleton, NBC
Fullscreen

Lauer, captured behind the scenes on Nov. 21, 2017, was terminated on a week later after a single, detailed credible report of sexual misconduct, his first in 20 years as host of 'Today.' NBC News chairman Andy Lack said there was reason to believe it was not an isolated incident. NBC, Nathan Congleton/NBC
Fullscreen