Participants in the Capri Christmas Boat Parade wave as they pass.(Photo: Jim Hughes/Special to the Sun Times)

In a cloud of flour inside their newly renovated Isles of Capri Market and Deli, Mike Castellano and his wife, Theresa, with the help of their daughter, Annie, labored for hours, making “made-to-order” pizzas they donated to the 11 boat captains and their crews prior to their Christmas parade voyage.

Not only did they serve pizzas ahead of the parade, but many of the captains ordered more on their return. Residents around the isles were also ordering Uncle Mickey’s pizzas for their boat parade parties on Saturday night.

“We made 60 pizzas, and then ran out of dough,” said Theresa. “We had to ask people to take something else like pastas and calzones for about an hour and a half so that we could get more dough ready.

“It was so much fun being in the middle of things, though, and we wanted everyone to know what we could do and what we had to offer,” said Theresa. “We hope it was good; we haven’t had any complaints.”

As the captains and their crews awaiting departure in the staging area behind Capri Marina, it was obvious to those looking on and flashing photos that the crews were enjoying their meals and appeared grateful to their host, the Castellanos. 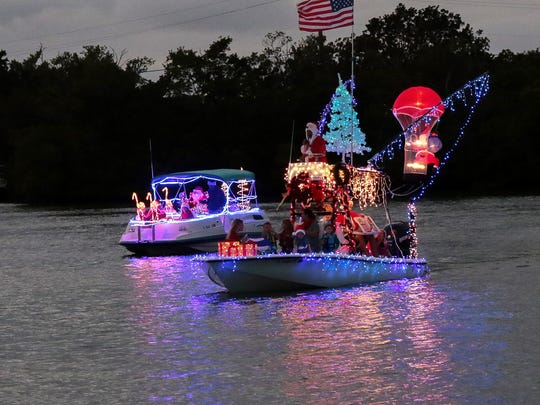 Participants in the Capri Christmas Boat Parade wave as they pass. (Photo: Jim Hughes/Special to the Sun Times)

In spite of the many obstacles that might have been on this windy, rain-threatening night, the parade went off smoothly. All boats were present and accounted for, except for one – the Thunderbird, a beautiful 40-foot multi-hull ocean-going sailboat owned and operated by Otis Tavlin and Nancy Anderson. 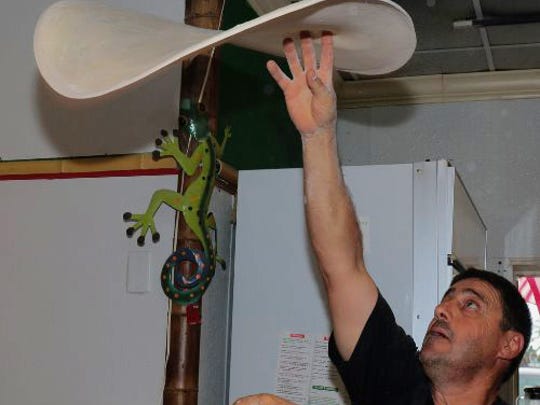 Tavlin and Anderson were parade coordinators, but were called out of town unexpectedly when Tavlin’s mother passed away last week. Most of the details had been completed, and they turned over the leadership to Capri residents Steve and Kelly Sprigg of Galati Yachts, Naples, to carry out the mission.

The Spriggs were new to Capri just prior to the 2014 Christmas Boat Parade, but quickly rallied, decorated their boat and jumped in for the fun.

“We love Christmas and love getting dressed up for Christmas activities,” said Kelly Sprigg. “This parade was a bit challenging for me, however as I had our 9-week-old baby girl, Ruby, on board with us, and she is still nursing.”

Both Marco and Isles of Capri had good participation, with each having nearly a dozen decorated vessels in the water together. Their joint promenade in the Marco River gave spectators a dazzling show, but did make for a longer parade time for each as they turned off into their respective island bays.