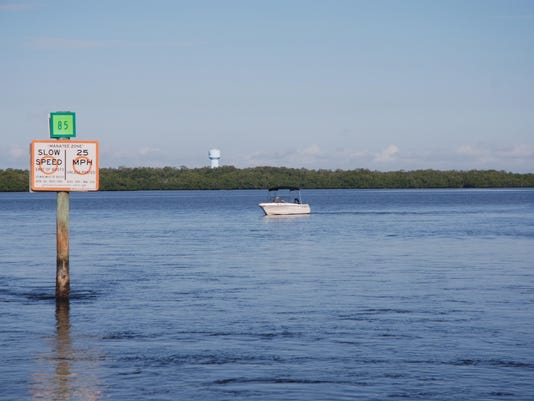 The rules for boating in Estero Bay change on Nov. 15, allowing boaters to travel 25 miles per hour in most areas. The winter rules are in effect Nov. 15 to March 31.(Photo: Andrea Stetson/Special to Coastal Life)

Things are about to speed up in Estero Bay.

On Nov. 15, manatee season ends in the aquatic preserve so boaters can travel 25 miles per hour outside of the channel.

Since April 1, the law was slow speed outside of the channel.

“Down here it will be 25 mph,” said officer Stuart Spoede of the Florida Fish and Wildlife Conservation Commission that patrols Estero Bay. “Normally when the water gets cold they move up to the rivers where they water is a little more stable.”

Jay Stemen, owner of All Water Excursions, said the winter rules do help a bit with his business.

“It does as far as fishing,” Stemen said. “It’s faster to get to some of the areas to accommodate the clients, but at the same time we want to protect the environment.”

The law flips on the Caloosahatchee, where boaters had been able to go 25 mph outside of the channel and starting Nov. 15, will have to travel at slow speed.

Manatees need warmer water to survive because they have little body fat and their metabolic rate is slow compared to other marine mammals.

These gentle giants can’t live in water below 68 degrees for a long time. In 2010, hundreds of manatees died during one of Southwest Florida’s coldest winters.

In the warmer summer months manatees travel along the coastal waters and are often spotted in our local bays. When the weather cools, they head up into the warmer rivers and also congregate in large numbers near the power plant in Fort Myers.

That’s why the speed rules change in Estero Bay and the Caloosahatchee River each April and November.

People can report sightings of injured, sick or dead manatees to the FWC’s Wildlife Alert Hotline at 888-404-3922, #FWC and *FWC on a cell phone, or with a text to Tip@MyFWC.com.

November is Manatee Awareness Month. During this annual manatee migration, the Florida Fish and Wildlife Conservation Commission reminds boat and personal watercraft operators that it is important to slow down to avoid manatees, especially in shallow areas. Winter manatee zones run from Nov. 15-March 31. Summer manatee zones will resume April 1 and run until Nov. 14.