On May 2, members of the Calusa Garden Club and students from Marco Island Academy teacher Jerry Miller’s Environmental Science class began a day of hard work to transform the campus into beautiful grounds.

The group planted more than 40 new plants and transplanted about 10 plants to areas better suited to the needs of the plants. 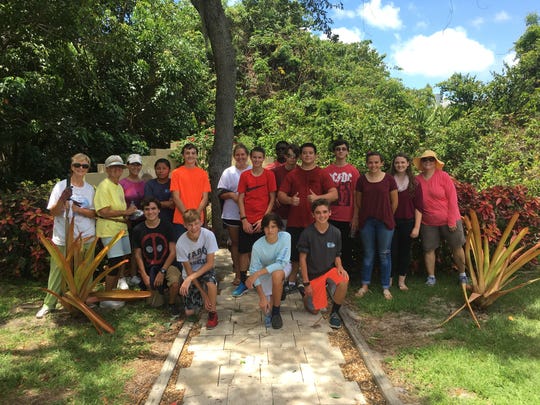 Foley was pleased and surprised when Zumstein asked her, “Would Calusa Garden Club members be interested in helping Marco Island Academy with its landscape plans, and work with the Academy’s Environmental Studies class in achieving the plans?” This question was the spark for Foley, who enjoys gardening and getting her hands in the dirt, but who lives in a condominium on Marco Island. So Foley recruited other volunteers from Calusa Garden Club to work with her and Marco Island Academy on an ad hoc committee to improve the school’s landscape, and even brought in an important partner when she approached Naples Botanical Garden and asked for donations of surplus plants.

When plans were adopted to work on the three main planting areas, Foley sent an enthusiastic email to Calusa Garden Club members asking for donations of plants for the Academy. Garden Club members responded with numerous donations of plants from their own gardens and from local garden suppliers. Next, Foley contacted Naples Botanical Garden and Chad Washburn, deputy director. The Botanical Garden definitely had surplus plants that would fit the needs of MIA’s plans.