On The Hook: When the fishing gets tough...

Here, as usual, is a tale of a charter event that went down just two weeks ago that gets caught up in this "tough fishing" dilemma.

On The Hook: When the fishing gets tough... 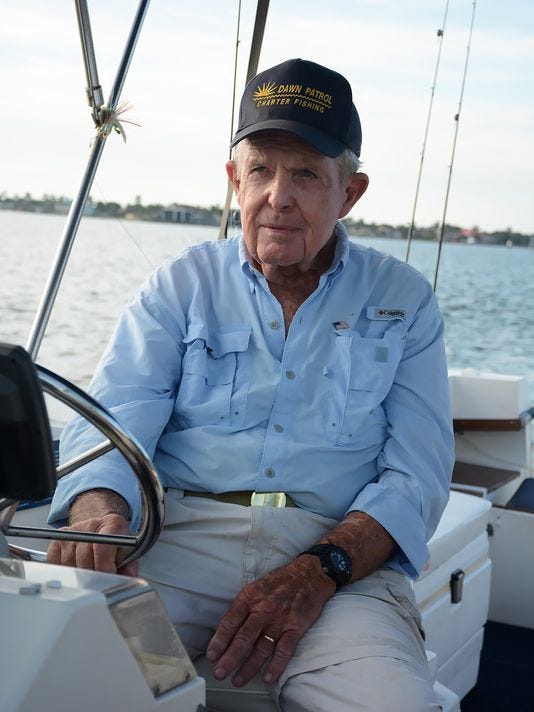 Dawn Patrol Capt. Bill Walsh, right, heads out in the morning. Backwater fishing is a great way to get out into nature's beauty, and maybe bring home dinner.(Photo: Lance Shearer/Special to the Naples Daily News)

If you fish our waters, especially the backwaters from Marco Island both north and east, you already know what I'm about to say: the fishing quality starting in the winter months of 2016 through the current month leaves a lot to be desired.

There, I've said it. To utter that perception as a charter captain is like calling the mortars in on your squad's infantry position. But far better to portray the fishing landscape as it is rather than how potential customers want it to be.

I think if I questioned most of my associates here in Southwest Florida, they would expound the same position. A position that we all can still catch fish, but most of them are small-ish and of a limited variety of species most of the time. There still are days, unfortunately few and far between, when the "curtain" rises and you meet the expectation of an ample and satisfying catch and take home filets.

The customers are all smiles and handshakes as they leave; the captain then retraces that same fishing route on the next trip with customers that have reveled in his disclosed prior success only to be crushed by another "a lot to be desired" event.

So, how come the tough fishing here? Get two or three anglers together anywhere, anytime, and you'll run into a litany of causal factors. Probably the most blamed reason is the unusual hot weather here from November through February. Remember those days in February when the beaches were packed, the pools were crammed and the mid-day air temperatures soared into the low eighties?

Well on the other side of the equation, that air temperature drove the water temperatures 10-12 degrees higher than normal resulting in stopping inshore migration and cold water spawning right in its tracks. It never recovered.

The other serious factor to consider is the deterioration of water quality hereabouts. The contaminated excess water releases from Lake Okachobee could well be the primary contributor. That fouled, algae-laden water finds it's way south and into our backwaters in days after frequent releases. Couple that with the contemporary engineering that sends storm water cascading over fertilizer-rich lawns straight into the canals instead of letting it percolate down through natural limestone using the now vanishing swales throughout the area.

So with all of that as backdrop, here, as usual, is a tale of a charter event that went down just two weeks ago that gets caught up in this "tough fishing" dilemma.

Started with an evening telephone call from Frank Smith (all names changed to protect the innocent): "Been referred to you from a good friend who tells me you do good work with family groups and I have my grandkids visiting next week. Any openings?"

We had two days open and he was interested in the late week one. We talked price and arrangements concerning the charter and he was almost at the "Book It" stage when he asked, "Oh, by the way what's the fishing like these days? We'd sure like to put a fish dinner together for everyone that evening. Can you deliver?"

"Frank, we've been catching a ton of smaller fish. Great action and we always get a few keepers, but assurances of a dinner array will be extremely thin...but I'll give it my best."

There was a momentary silence on the other end.

My response: "Better...if you get out far enough you'll see some nice snapper at a minimum. Be glad to give you a couple referrals."

"Let me check with the family and I'll get back to you. Don't book it yet."

Two days went by before there was any follow up and I was ready to clear the proposed date.

Another evening call. It's Frank.

"Skipper, the kids don't like the prospect of any rough water and tend to like the more placid backwater. So the offshore is off. Go ahead and book us for that Thursday. There will be four of us...counting on you for your best."

We booked the trip. As the day neared, I reviewed two or three weather forecasts and we looked good for the morning trip; however, in reviewing the tide timing, I noticed that with an 8:30 start we would endure a tide change with slack water early on.

Now enduring the slack water is normally not a problem, but these days, you had to work to every positive indicator. That resulted in a phone call to Frank asking him if there was any problem switching our start time to 10 where we would be working a full outgoing tide. He agreed.

Our day dawned bright and clear but with a developing gusty wind. There was some concern from the crew, but that eased when we assured them we would be in sheltered areas, nice and flat.

Our first two stops were up along the Keeywadin docks, where under normal past circumstances we would find nice size snapper on the outgoing tide. We had all four of the crew in the fray with nice fresh shrimp.

An hour later after working two docks, we had caught small fish but only one minimum size keeper for the cooler.

You could feel the disappointment from the crew. Frank had a look of consternation written all over his face.

We headed to Hurricane Pass where at this juncture of the outgoing tide we would try for pompano drifting the Pass. But this time we would approach the attempt differently by anchoring up on a deeper spot with more consistent bottom structure.

We got our baits in the water and at first the little snapper showed up. Frank was beside himself. Then suddenly, two of kids had hard strikes and within five minutes we had two nice keeper pompano in the cooler.

The lesson was becoming clearer: you had to change approach in these tough time of the overheated water and fish deeper cooler climes.

With that, we picked up and hurried back to Rookery Bay to try our new theory on snapper. Our usual snapper spot there was in six to nine feet of water. This time we set up in an adjacent drop off that showed a fifteen foot depth and had at it.

Save you the detail of what happened, but in that last hour we boxed six nice mangrove snapper to twelve inches. On the way home, lots of smiles and Frank with a grin like the Cheshire Cat.

So, bottom line, lesson learned is to adapt to the tough conditions by trying radical departures from past experience and realize that fishing is a challenging experience.

That's what brings us back.