Guests were invited to bring food to donate to the shelters for Gypsy’s less fortunate canine relatives and feline cousins.

There were only crumbs remaining of the dogfood birthday cake made by Tammy Wilson. The goody bag party favors made by Gail Cochran were also depleted.(Photo: Ann Hall/Correspondent)

Isles of Capri couple Mike and Gail Cochran, who have enjoyed many good times and created many lasting memories with family and friends at the Island Gypsy Café and Marina Bar, held their 5th annual birthday bash in honor of their family pet, Gypsy Sue.

“This community is just wonderful; it is a loving, caring and giving place to live,” said Mike. Guests also come from Naples and Marco Island who are equally as loving and giving.

The Cochran’s became engaged at, and then later married at the café and marina bar. It was only natural that when they adopted their part bull mastiff and part boxer mix puppy, they would name her “Gypsy Sue.” Gypsy Sue turned five year old on Sunday. To celebrate her special day they felt the need to make the day special for others as well. The others referred to here were dogs who have no homes housed in local Collier County shelters.

In lieu of birthday gifts for Gypsy Sue, guests were invited to bring food to donate to the shelters for Gypsy’s less fortunate canine relatives and feline cousins. The response was overwhelming. Guests arrived with their doggies on leashes and their arms filled with dog food, cat food, milk bone treats and cash donations. The first year, 500 pounds were donated. Each subsequent year has seen an increase of 500 pounds. “This year, it looks like we have collected over 2,600 pounds so far,” said Michael, “not to mention cash donations.”

Dogs of a variety of breeds and sizes gathered. There were birthday party favors and even a homemade birthday cake for the dogs to eat. A large beer bucket filled continuously filled with ice gave the thirsty canines a chance to cool down whenever they could get Lexi, a 6-year old 130-pound Newfoundland to move out of their way. Lexi claimed ownership by putting her large head into the ice bucket.

“Lexi and Gypsy became best friends the first time they met,” said Mike. They met at the dog park on Marco Island. When the dogs met, we owners Ginny, Bill, Gail and I also became good friends. “Lexi has the reputation as the mediator at the dog park,” said Cochran. She proved this to all at Gypsy’s part as well, when one of the guest canines became a little feisty. Lexi simply walked over calmly, and every canine present got the message to cool down.

More: Capri Connection: Brown droppings on pool decks and patios may be a blessing

Gypsy Sue sported a large pink bow making her stand out as quite the girl at her party. She appeared happy to have her guests and willingly shared her birthday cake with all. Tammy Wilson, Capri resident and friend of the Cochran’s made an edible doggie birthday cake that was devoured in a matter of moments. 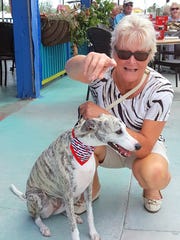 Sally, a rescue whippet was a new invited guest as this was her first year on Capri. Her owners Karin (pictured here) and Devik Harald are from Sweden and are year-rounders who say they love Capri. (Photo: Ann Hall/Correspondent)

While the dogs visited and played with one another, the human guests got their fill of delicious assorted pizzas, house wines and cold brew provided by the Cochran’s. Sally, a rescue whippet was one of Gypsy Sue’s newest doggie friends, who moved to Capri from Sweden. She lives with her owners Karin and Devik Harald full-time on Capri. There were too many breeds to list, but each of Gypsy Sue’s doggie friends were unique, friendly and the life of the party.

“I did not think up this idea on my own,” said Michael. “When I lived in Key West about 14 years ago, there was a man who owned a dog track there. He abandoned the track and the dogs. When the community learned of this, they gathered and brought enough food to feed them. Within five hours, every abandoned dog had been adopted, and now they have birthday parties for their dogs to encourage donations of food for shelters,” he explained.

Cochran added that cat food donations were also welcome on his printed invitations this year. “We are hoping to keep the trend going and up the amount of food raised for the shelter each year.” 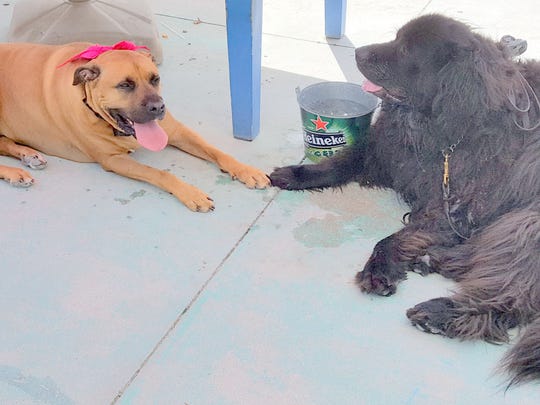 Best friends since day one are Gypsy and Lexi who met at the Marco Island Dog Park when both were just puppies. (Photo: Ann Hall/Correspondent)

The party will continue to be held at the Island Gypsy Café and Marina Bar on Isles of Capri, and the Cochran’s will continue to provide the treats for the event. “We may move it to an evening event so that it would be cooler,” said Cochran. The party took place under sweltering heat and storm-threatening skies. Towards the end of the festivities, the rains poured down on man and beast alike. Not one seemed to mind, although the humans ran for cover, the canines seemed to love cooling off in the downpours. It was a welcome relief to all.

“We plan to keep the party as is except for a possible time change,” said Cochran. “My dad taught me long time ago, if it isn’t broken don’t try to fix it,” he said. “We earned 500 lbs. of food the first year, 1,000 lbs. the second year, 1,500 lbs. the third year plus $300 in cash donations, 2,500 pounds last year, and it looks like we already have more than 2,600 pounds and additional cash donations this year in spite of the weather conditions.”

The downpours towards the end of the birthday party had the humans running for cover, but the rains did not dampen their spirits. (Photo: Ann Hall/Correspondent)

The Cochran’s SUV was loaded to the point of overflowing. There were bags of food in the front, middle and rear full to the brim leaving only the driver’s seat empty for Gail to take the load to the shelter on Monday.

Being a dog owner is not all that keeps the Cochran’s busy. Michael is currently working with Artichoke Caterers as a marketing consultant. He also holds a 100 gross ton captain’s license for boaters and provides tours. Gail is a pharmacy technician at Costco of Naples.