It examines the cumulative effects of spending excessive amounts of time on digital devices, particularly cellphones.

A couple watches a recent showing of Screenagers at the Marco Y. (Photo: Submitted)

As the long-serving principal of the Marco Island Charter Middle School, George Abounader was particularly interested in the recent local screening of a documentary called “Screenagers.”

It examines the cumulative effects of spending excessive amounts of time on digital devices, particularly cellphones.

It was screened recently at the Greater Marco Family YMCA courtesy of the David Lawrence Center, which is a new Y partner.

"Teenagers' brains these days are wired very differently than the way ours were wired," Abounader said.

"This generation was born into the digital age. They have never experienced a world without screens, and like the documentary says, you can adapt it to be a good instead of an evil."

Realizing the dangers of excess right here on Marco Island about two years ago, the board of MICMS put in place a student cellphone policy that requires devices to be left outside in lockers, or in a caddy in the classrooms.

"The thinking was that there was enough tech in teachers' hands to use in the classrooms, and that it was unnecessary for students to bring in their phones," Abounader said.

The policy has worked well, he said, but understandably when the school day closes, out come the cellphones en masse.

Which leads points in the movie that suggests the age-old human dilemma of time management might be at least part of the solution.

Filmmaker and physician Delaney Ruston uses her own (just turned) teen daughter, and after lengthy discussions on the need for a phone, the two compromise with a contract on when it can be used and when it should be stored.

Interviews with various students follow, and one acknowledges that if he were to use the phone in class, it would be to his own "detriment."

Another said parental policing would be a bit of a joke, because savvy kids could just change tabs on their devices. 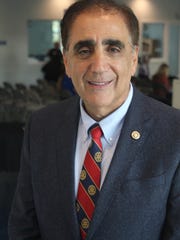 Marco Island Charter Middle School principal George Abounader says the school has some device restrictions in place that are OK with the students.  (Photo: Submitted)

"You can easily outsmart them," the student says of his parents.

One mom highlights a phenomenon familiar to anyone who's the slightest bit observant by saying she hasn't seen her daughter take any photos other than selfies.

This, she notes, is compounded by the girls almost always touching up the photos so that people "like" their posts.

By contrast, one teenage boy turns the tables on adults' Internet addiction, suggesting that the "problem" might not be entirely generational.

"Every morning my dad goes on the family laptop," the boy says. "He's just hooked."

Perhaps the most sinister observation came from a physician who said Internet use releases dopamine (defined as a neurotransmitter that helps control the brain' reward and pleasure centers), and that the going online rush is similar in some ways to drug use.

Which confirms that Internet addiction is real in anybody's language, says the documentary.

Screenagers is available for showing to groups for a fee. Visit screenagers.com.

For more on the Greater Marco Family YMCA's wide variety of activities and programs for youth and adults, visit marcoymca.org (an app is available) or call 394-3144.