With December here – already? – the Christmas season on Marco Island is in full swing.

They sat in the balmy air, chowed down with friends and families at some football-style tailgate parties, and applauded the cute-as-a-button tiny dancers of the Island Dance Academy before counting down as the 40-ft. tall Christmas tree was illuminated. The dancers, under the direction of Natalie Strafford, gyrated around the temporary stage with varying levels of precision, but the costumes and the faces alone were worth the price of admission, which was free, after all. 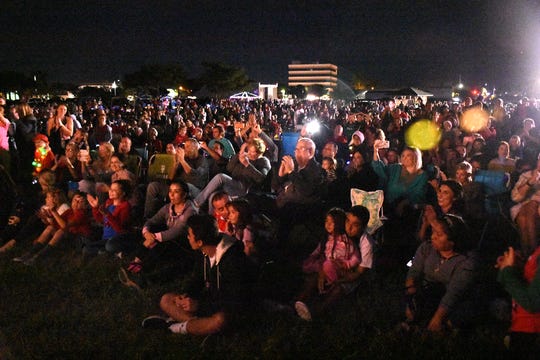 The crowd shows their appreciation for the young dancers. Thousands turned out for the Christmas Island Style tree-lighting ceremony at Veterans' Community Park on Saturday evening.  (Photo: Lance Shearer/Correspondent)

Additional performers included the Marco Island Charter Middle School chorus and band, both under the baton of Marti Miller, singing and playing tunes including “All I Want for Christmas is You” and “I Want a Hippopotamus for Christmas,” two distinctly different messages. The Marco Island Academy Chorus, directed by Chris Dayett, went Hollywood for their selections, singing “Believe” from “The Polar Express” and a medley from the new Grinch movie.

Emcee Jim Long stretched the definition of Christmas music, starting out with “God Bless the USA,” and throwing in Neil Diamond’s “Sweet Caroline,” which maybe needs just a few lyric tweaks to become “Sweet Caroling,” and a new Christmas tradition.

As always, the open field at the park, which is what allows Marco Island to hold such a spread-out, non-claustrophobic event, was lined with SUVs and minivans backed up to the stage with major tailgate parties going on. One of the biggest was hosted by scores of members of the Marco Sportfishing Club, who set up eight tables of food and drink, and showed they know how to have fun on land as well as by sea.

Kids ran around on the periphery, blowing off steam in games of tag and netless volleyball. Many of them, along with more than a few adults, wore personal electric light decorations, lending a festive air to the proceedings and lighting up the night ahead of the actual tree lighting.

That was performed, after a benediction from new pastor Tom Beck of Marco Lutheran Church, by Beck and Christmas Island Style chair Steve Stefanides, to sustained applause, after which people took turns taking pictures of each other in front of the massive (steel-framed) tree.

It’s beginning to look a lot like … well, you know.

The next few weeks will be filled with CIS activity, starting with a pet parade Tuesday, the Christmas Boat Parade Saturday, and a Christmas movie in the park on Dec. 14. For more information, go to www.christmasislandstyle.com.