It was also sunny and warm, with the mercury reaching into the 80s. The “snowfall” took place at the Golden Gate Community Center, where Collier County Parks & Recreation put on its 33rd annual Snowfest. 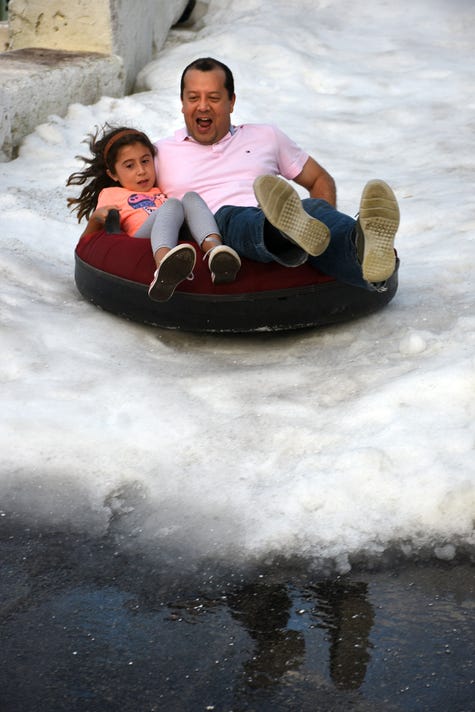 Some kids felt safer sledding with dad along for the ride. Hundreds of children and their parents came out for a taste of winter at Snowfest, Saturday afternoon at Golden Gate Community Center.(Photo: Lance Shearer/Special to the Naples Daily News)

Last Saturday, the forecast called for 100 percent chance of snow in Golden Gate.

It was also sunny and warm, with the mercury reaching into the 80s. The “snowfall” took place at the Golden Gate Community Center, where Collier County Parks & Recreation put on its 33rd annual Snowfest.

An estimated 15,000 people thronged the park, making Snowfest one of the largest, if not the largest, public events in the county. Workers created approximately 100 tons of snow, starting before dawn to finely grind the ice used to create snowhills and the double toboggan run.

Mittens and scarves which had sat unused in drawers all year came out, as young children, many of whom had only ever seen snow in a book or on TV, got as close to the feel of playing outside after a blizzard as you can come in Southwest Florida. 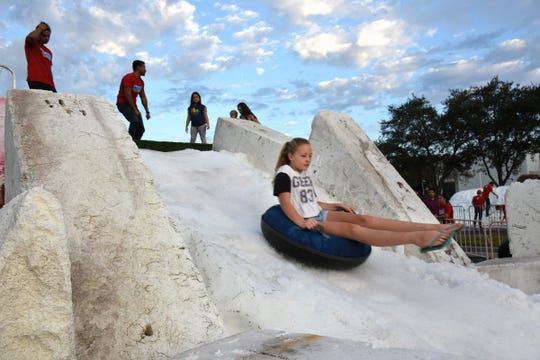 Where else can you toboggan in flipflops? Hundreds of children and their parents came out for a taste of winter at Snowfest, Saturday afternoon at Golden Gate Community Center. (Photo: Lance Shearer/Correspondent)

Long lines formed for the children to spend a few minutes frolicking in the white stuff, with separate hills provided for the various age groups, to keep the snowball fights fair. Of course, more often not, the targets for those first snowballs were the children’s parents, the same ones who brought them to the event.

Confronted with a “mountain” of snow, the first imperative for a child seems to be to scale it, responding to some “king of the hill” instinct buried in our psyche, and then to slide down. The kids who had the biggest grins often also had the wettest behinds, as the snow melted in a steady trickle.

The snow was clearly the star attraction, but there were a host of other activities, rides and games to keep the younger generation engaged. Snowfest is a full-featured winter carnival, with a midway offering carnival rides and attractions, “Mrs. Claus’ Kitchen” food court with everything from kettle corn to arepas (sweet corn patties), funnel cakes, pizza, hot pretzels and more, DJ Chris Hogenson leading the crowd in classic holiday tunes such as the “Electric Slide,” “Rock Lobster,” and the Mararena, rides and activities such as laser tag, a dodgeball arena, and the Sheriff’s Office climbing wall, as well as the chance to have your picture taken with Santa Claus. 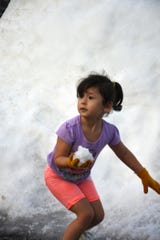 Sofia Gazieya, 3, prepares to throw her first snowball. Thousands of children and their parents came out for a taste of winter at Snowfest, Saturday afternoon at Golden Gate Community Center. (Photo: Lance Shearer/Correspondent)

In addition to the piles of snow and a chance to try ice skating, Snowfest featured a full-blown midway and fair. A Ferris wheel offered an aerial view of the site, and a smaller one provided a ride for small children. Games of skill and chance offered families the opportunity to win stuffed or inflatable animals, which the parents then had the chore of carrying around for the balance of their visit. While Snowfest was a one-day only Saturday event, the midway rides and attractions returned on Sunday.

The palm trees provided a surreal backdrop to the sight of hundreds of kids playing in the snow. Moms and dads in shorts, sleeveless tops and flipflops encouraged their bundled up offspring to climb up the three-and-under snow mound, helpfully making snowballs for them and occasionally taking a potshot with one at their own children. Some of the children tobogganing down the snow hill, presumably not having gotten the memo, were shod in flipflops as well.

For those who remember going through a long northern winter, the day in the park provided enough slushy snow to last all year long.