This is the 14th Change of Watch transition in the organization’s history and the first since the Marco Island Sail and Power Squadron.

“It takes a Squadron, working together, to organize and conduct the fun events, courses, and services that build the boating community of this island paradise,” said Thomas G. Morr who was installed as the Club’s Commander for the coming year.  “We want Marco’s residents to enjoy watersports. We invite all boaters to join us,” Morr said. 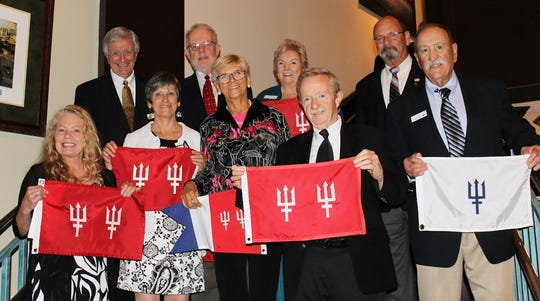 An additional 27 leaders assumed committee chairs, committee membership and other responsibilities for the year, bringing the total leadership team to 41.

“Volunteers are the key to the success of America’s Boating Club – Marco Island,” Morr said.  “All of the Squadron’s 165 members will contribute time, effort and/or resources this year to make boating fun and safe here.  If you want to be a worthwhile part of an active group, this is the place to be.”

“It takes teamwork to put on an event like this which makes it fun and builds lasting friendships among Club members,” said Morr.

District 22 Commander Donald Cook, Manatee Sail and Power Squadron, recognized the success of the Squadron and swore in the newly-selected leaders.

“Marco Island has successfully grown its membership, increasing by 5.6 percent in 2018,” said Cook.  “That is good news. The challenge now is to encourage those and all members to be even more active participants in your activities, community service project and skill development courses,” Cook stated.

“I leave the role of commander knowing the Bridge and Club have a bright future of growth and success,” Burson said. “Being the Club’s leader has been a pleasure and rewarding.”

“Gene Burson has helped the Club grow its membership, civic activities and boating events,” said Morr.  “He has done a terrific job leading our fund-raising to support our education program and he spear-headed creation of a new council of all the boating organizations on the island.  Congratulations Gene on a job well done!”

“We offer free vessel safety checks to any boater on the island, outstanding courses to educate boaters and help them develop boating skills and the Club’s members survey the condition of aids to navigation (Markers) to help various governments assure that channels and hazards are properly identified,” said Morr.

The Club organizes numerous boat cruises and a full schedule of social events for its members to have fun and sharpen their boating skills. “This is a boating club with a purpose,” Morr stated.