Like Woodstock 50 years ago, the Marco Island Seafood and Music Festival delivered “three days of peace and music.” 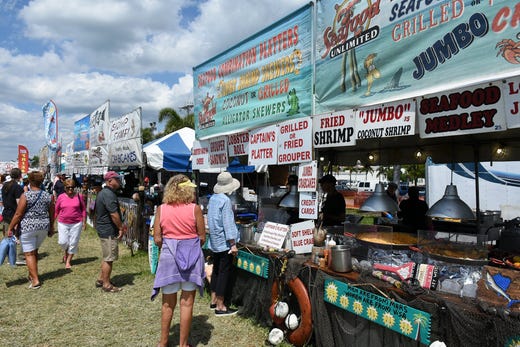 Patrons stroll the line of seafood vendors to make their selections. The Marco Island Seafood and Music Festival returned to Veterans' Community Park for the 11th year over the weekend, drawing record crowds. Lance Shearer/Correspondent
Fullscreen 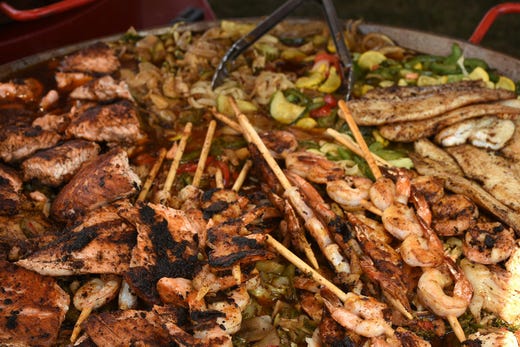 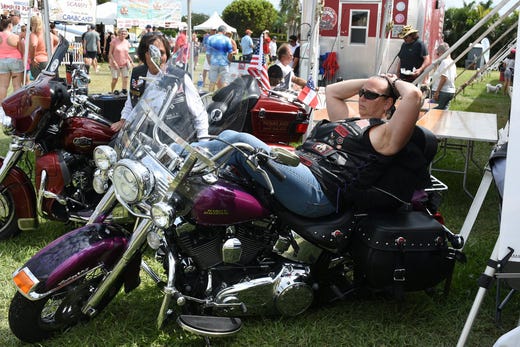 Pam Phillips of Rolling Thunder uses her "hog" as a recliner. The Marco Island Seafood and Music Festival returned to Veterans' Community Park for the 11th year over the weekend, drawing record crowds. Lance Shearer/Correspondent
Fullscreen 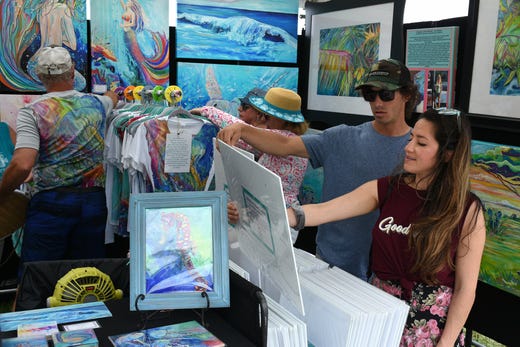 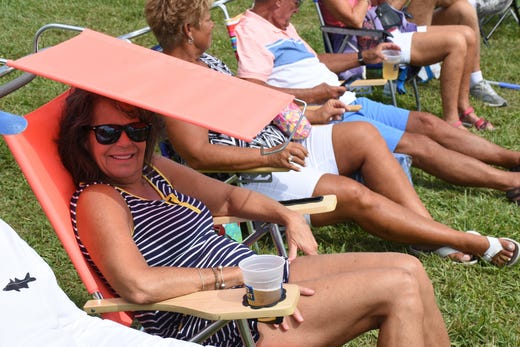 Deena Vollinger brings her own shade with her. The Marco Island Seafood and Music Festival returned to Veterans' Community Park for the 11th year over the weekend, drawing record crowds. Lance Shearer/Correspondent
Fullscreen 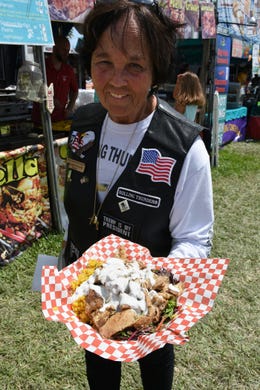 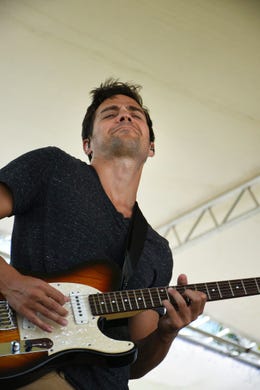 One Night Rodeo guitarist Erol Ozsever lays down a solo. The Marco Island Seafood and Music Festival returned to Veterans' Community Park for the 11th year over the weekend, drawing record crowds. Lance Shearer/Special to the Nap
Fullscreen 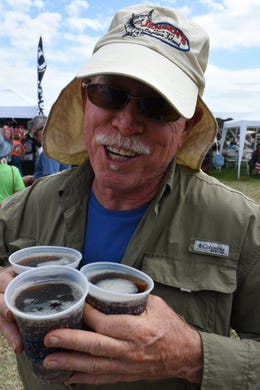 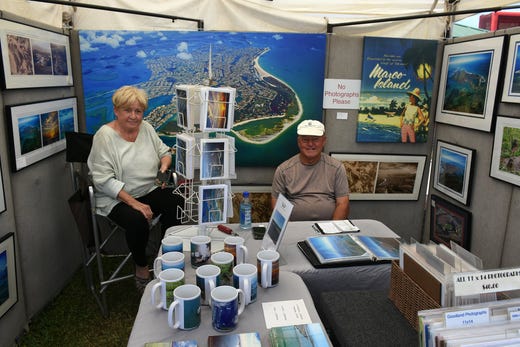 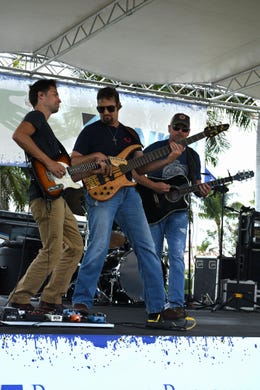 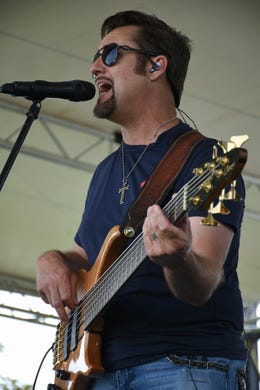 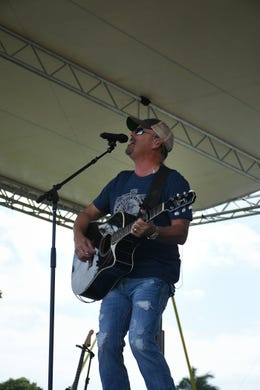 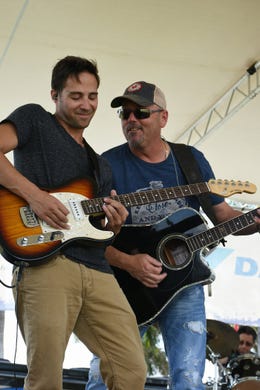 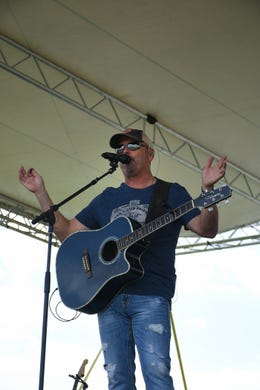 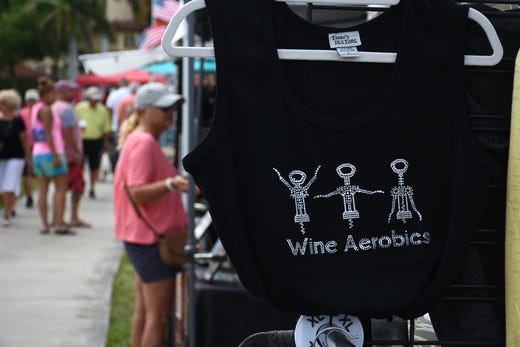 Festival-goers shop for merch including clever T-shirts. The Marco Island Seafood and Music Festival returned to Veterans' Community Park for the 11th year over the weekend, drawing record crowds. Lance Shearer/Special to the Nap
Fullscreen

Like Woodstock 50 years ago, the Marco Island Seafood and Music Festival delivered “three days of peace and music.” But Marco Island also threw in seafood.

In fact, seafood was back in the title of the festival, held this past weekend at Veterans’ Community Park, after an abortive and short-lived name change last year removed “sea” from the food in the event’s official name. And whether it was the seafood, the music, the picture-perfect weather or just the laid-back small-town Americana vibe, this year’s festival was the biggest ever, said organizers.

“Saturday night was our biggest ever, with 4,800 people,” festival chair Stan Niemczyk, who came up with the idea for the festival 11 years ago, said on Sunday afternoon. “And we’re up over 9,000 total – both records.”

Festival-goers came to hear a succession of bands, playing music in a variety of genres. Friday night’s headliner was Disco Inferno, after sets by Myles Loud and the Greg Miller Band, who play a soul-infused blend of pop. On Saturday, always the biggest attendance of the weekend, Jimmy Buffett tribute band the Landsharks returned to Marco Island, channeling all things Margaritaville – which is the name of Buffett’s club, where the Landsharks were hired to be the house band after performing with the original “parrothead.” In essence, the Landsharks offered attendees a “shrimpburger in paradise.”

The Landsharks were preceded on Saturday by opener Joe Marino & All the King’s Men, followed by the Ben Allen Band, a guitar-driven country rock outfit that has developed their own following of fans who show up wherever they are performing.

Sunday’s closing act was Tampa-based One Night Rodeo, another group straddling the line between “a little bit country, a little bit rock and roll,” leaning on the country side. They followed Smokin’ Joe and Connie, playing feel good rock and pop covers.

The seafood component of the festival came from a lineup of traveling vendors, who make the rounds of festivals up the east coast, and down to the Seafood Festival in Everglades City. Most of the purveyors, said organizer Dianna Dohm, “have been with us from the beginning,” although “Mobstah Lobstah,” a Mafia-themed seafood trailer, was new this year and always seemed to have a line of hungry people waiting.

A tent city of crafts vendors sold everything from turmeric to T-shirts, cigars to chairs, and signs with messages like “just another day in paradise” and “hurricane evacuation plan: 1. Grab beer 2. Run like hell.”

California transplants Jim and Laura Wandry sold the recycled surfboards they turn into works of art. The boards are lightweight, and “a surfboard takes a million years to break down,” said Laura, so hanging them in your home gives them a place to stay while they do.

The festival runs on volunteer labor, said volunteer coordinator Dennis Pidherny. He estimated that over 175 volunteers put in thousands of hours to keep it functioning smoothly, even with paid crews setting up and cleaning up.

Three civic organizations working together, the Marco Kiwanis plus the Sunrise and Noontime Rotary Clubs, plus students from Marco Island Academy, Lely High School, and Marco Island Charter Middle School, all helped out over the weekend. The festival has taken in over $70,000 per year for the charitable endeavors of the service clubs, with each club receiving between 22 and $25,000, said Dohm, although numbers for this year were not available at press time.