“You can never relax,” Jenny Whittles said. “It’s constant anxiety for us as parents.”

If you didn’t know any better, you’d think Libby Whittles was like any other six-year-old, if a little shy.

In most ways, she is.

Libby likes the color pink. She loves her two cats, Arlo and Henry, and her dog, Indie – short for independence. She plays with her three siblings, talks to her animals and spends as much time as possible in the pool. All of this happens under the watchful eyes of her family, often at their home in North Naples.

“You can never relax,” Libby’s mom, Jenny Whittles said. “It’s constant anxiety for us as parents.”

Libby usually has one to two seizures a month. Sometimes, she’ll go for months between one and the next. Some weeks, she’ll have two to three seizures a day, leaving Jenny and her husband, Daniel Whittles, wondering when the day will end.

And there will be resilient Libby, bouncing back with a smile.

“She definitely helps bring us back up again,” Jenny said. 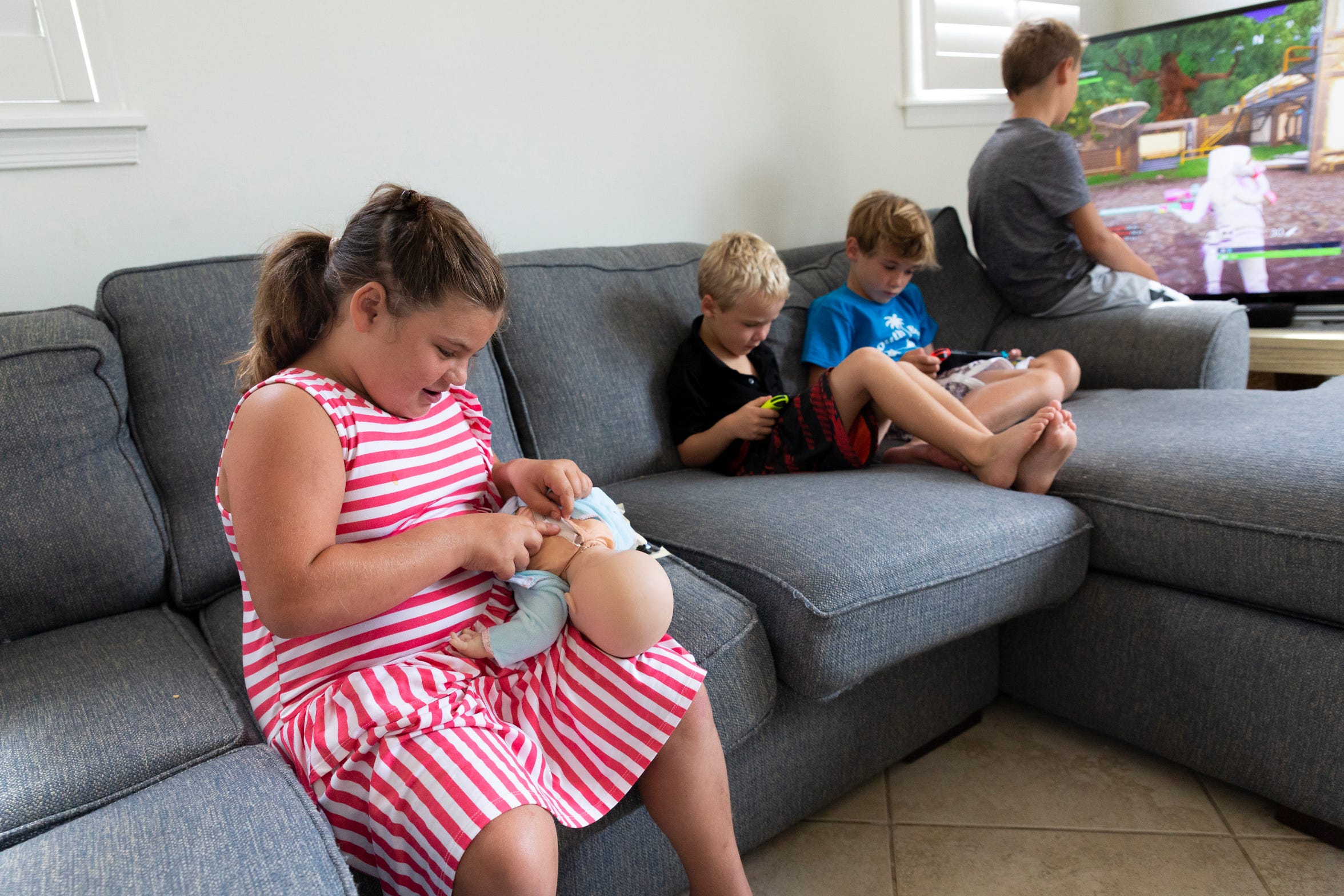 Libby Whittle plays with her doll Alex at home on Monday, July 29, 2019, in North Naples. Libby has epilepsy and recently had a Make-A-Wish experience in Key West as a therapeutic program.
(Photo: Wangyuxuan Xu/Naples Daily News USA TODAY NETWORK - FLORIDA)

Jenny said Libby experiences three kinds of epileptic seizures. Libby experiences some of the more obvious seizures, characterized by muscle spasms and contortions. Sometimes, her seizures make her collapse, unconscious. And she has hallucinatory seizures, too, puckering her lips like she’s eating something sour.

“It was every second of every day living in anxiety,” Jenny said.

Not that you’d know it from looking at Libby. Happiness shines in the gaps between missing teeth, telling tales of recent Tooth Fairy visits.

Libby has some developmental delays, and Jenny began noticing them when her daughter was about eight months old. She’s gone to speech therapy and struggles a bit with balance and coordination.

Libby’s twin brother, Joe, does not share Libby’s condition. Jenny took Libby for testing as an infant, and test results showed part of Libby’s brain was not fully developed, which could cause seizures. Days after receiving the test results, Libby had her first seizure.

Libby Whittle leans on her mother, Jenny Whittle's shoulder during an interview at home on Monday, July 29, 2019, in North Naples. Libby has epilepsy and recently had a Make-A-Wish experience in Key West as a therapeutic program.(Photo: Wangyuxuan Xu/Naples Daily News USA TODAY NETWORK - FLORIDA)
Fullscreen 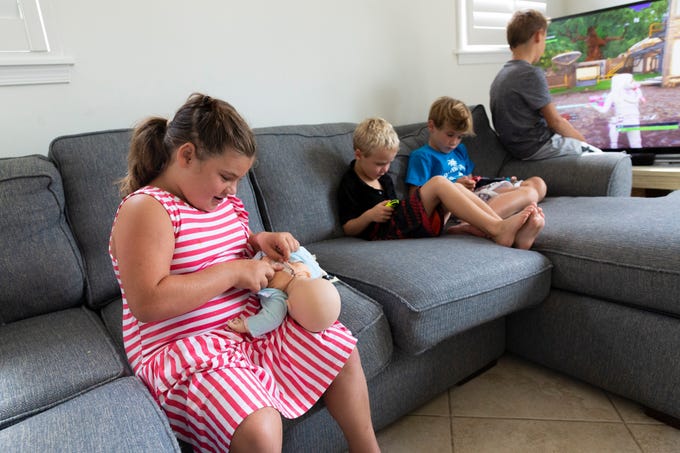 Libby Whittle plays with her doll Alex at home on Monday, July 29, 2019, in North Naples. Libby has epilepsy and recently had a Make-A-Wish experience in Key West as a therapeutic program.(Photo: Wangyuxuan Xu/Naples Daily News USA TODAY NETWORK - FLORIDA)
Fullscreen 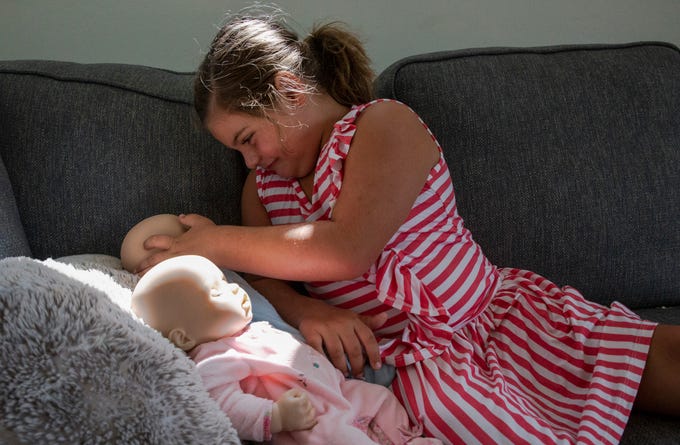 Libby Whittle plays with her dolls, Alex and Annabelle, at home on Monday, July 29, 2019, in North Naples. Libby has epilepsy and recently had a Make-A-Wish experience in Key West as a therapeutic program.(Photo: Wangyuxuan Xu/Naples Daily News USA TODAY NETWORK - FLORIDA)
Fullscreen 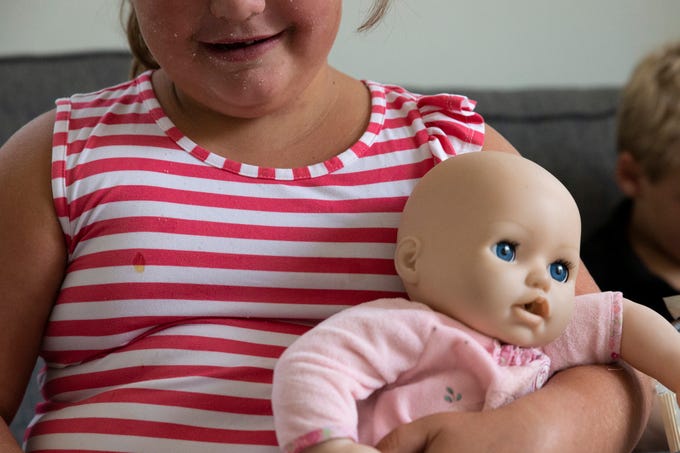 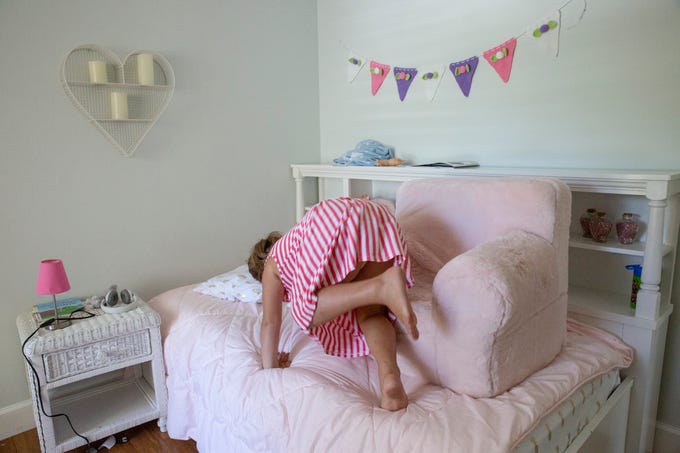 Libby Whittle lifts her sofa on her bed at home on Monday, July 29, 2019, in North Naples. Libby has epilepsy and recently had a Make-A-Wish experience in Key West as a therapeutic program.(Photo: Wangyuxuan Xu/Naples Daily News USA TODAY NETWORK - FLORIDA)
Fullscreen

Libby Whittle relaxes on a couch at her home on Monday, July 29, 2019, in North Naples. Libby has epilepsy and recently had a Make-A-Wish experience in Key West as a therapeutic program.(Photo: Wangyuxuan Xu/Naples Daily News USA TODAY NETWORK - FLORIDA)
Fullscreen

“You never stop trying different things,” she said. And after all this time, “Now we just know how to cope with it.”

The biggest thing is staying with Libby when she has a seizure. Adults assume the responsibility of making sure her head is okay and timing the seizures. Most seizures last about 5 minutes. If they go much longer, it could be cause for concern and Libby might need her emergency medicine, diazepam.

Libby’s siblings know to make sure Libby is OK, or to get an adult, like one of their parents.

When Libby started having seizures, her recovery time was between one to two hours. She’d be tired, sleepy, cranky. These days, Libby rebounds in 15-20 minutes.

Libby’s seizures have not dampened her spirit in the least.

“She is the kindest, sweetest child,” Jenny said. “She just loves everything.”

Ben, Libby’s 9-year-old brother, appreciates her sister’s kindness. He likes riding Expedition Everest at Disney World with her, and she helps him be brave for the tallest water slides.

Jenny’s next challenges are raising awareness about epilepsy and putting her daughter in kindergarten.

It’s important for Jenny to break down some of the stigma, she said, and for people to be educated about epilepsy so they’re not frightened.

“There’s nothing to be afraid of,” Jenny said.

She made some traction with that education when their recent Make-A-Wish trip received attention through a local TV station, though it incorrectly identified Libby as non-verbal.

Aside from that, the experience was beautiful for the family.

Which is saying a lot, considering how much Libby smiles.

The family traveled to Key Largo and spent a week working with Island Dolphin Care. Libby went through some skills training in the mornings before making her way out to the water a bit later in the day to work with the dolphins.

More than just swimming with dolphins, the therapy helped Libby build confidence and decision-making skills as she chained together commands for the dolphins into a sequence. 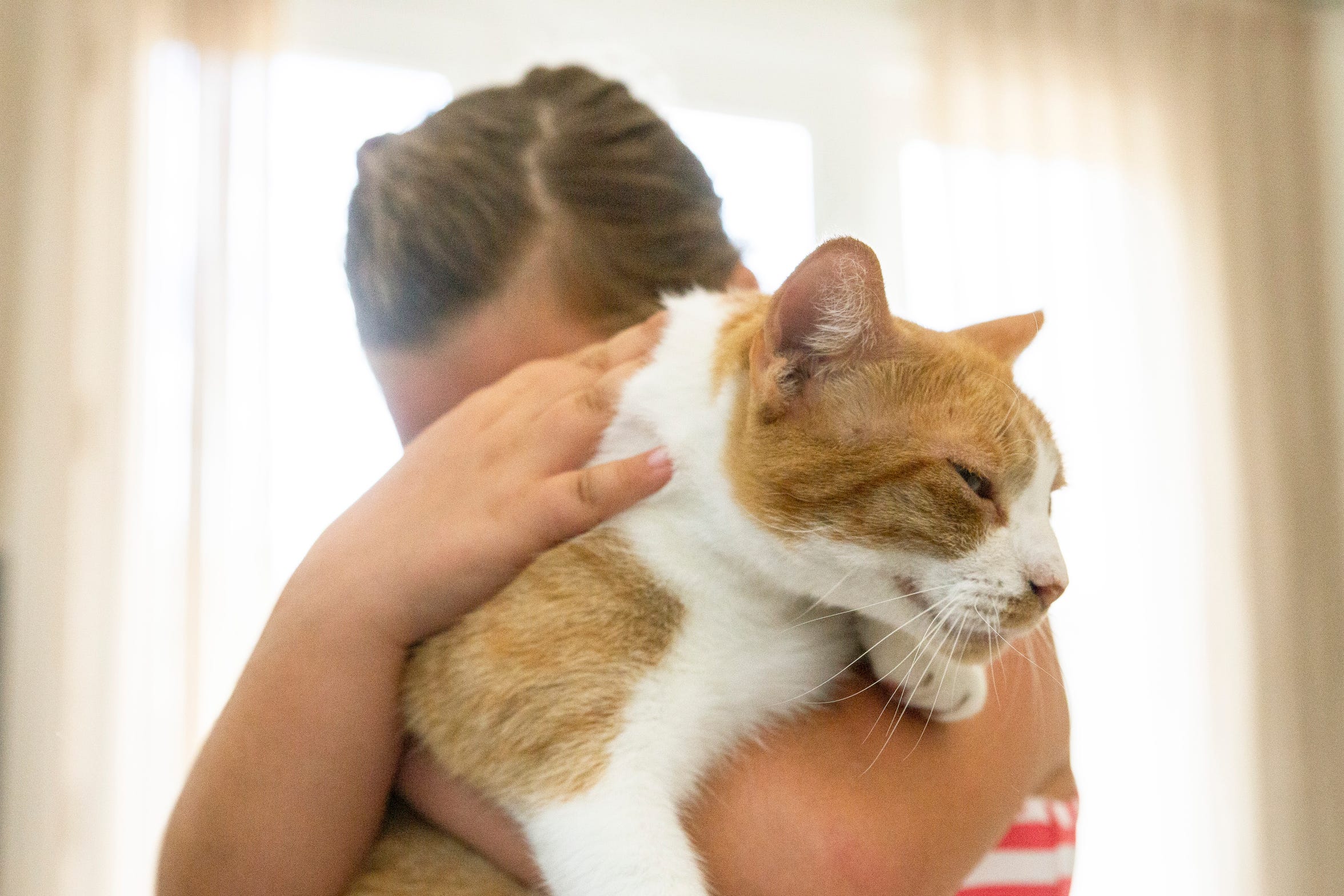 Tammy Lynn, Southwest Florida’s regional director of Make-A-Wish, said her organization grants the “wishes” of critically ill children. Wishes fall into four categories: to be, to go, to have, to meet.

Libby’s wish would have been a “to go” wish — to go swim with dolphins.

It helps kids — like Libby — be more compliant with ongoing treatment and gives them something to look forward to.

“Everybody knows somebody that had a wish,” Lynn said. “Just knowing what a wish does to that child and for that family is powerful stuff.”

Libby, until recently, has been with her mom at Oak Haven Montessori, where Jenny is head of school and toddler teacher. 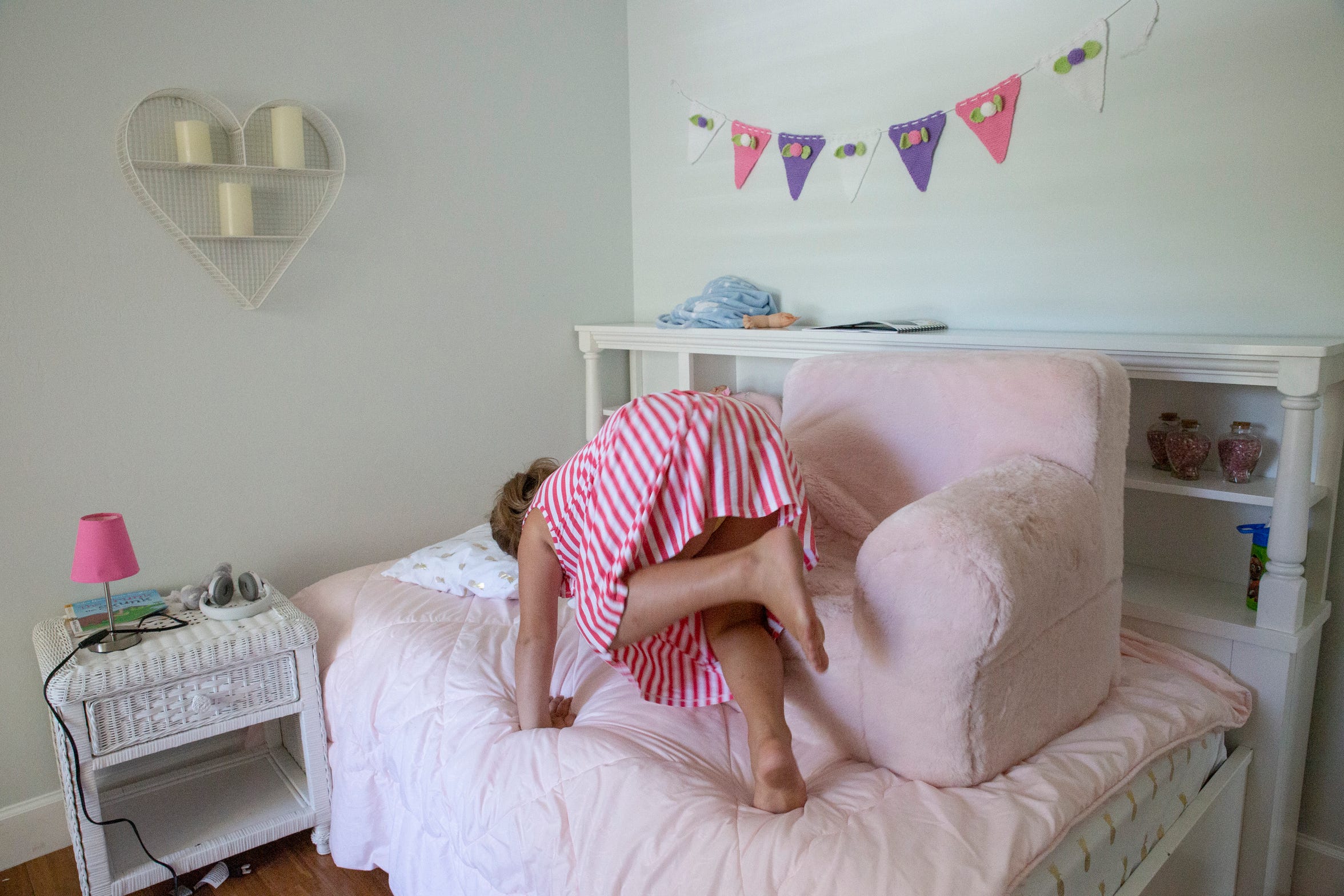 Libby Whittle lifts her sofa on her bed at home on Monday, July 29, 2019, in North Naples. Libby has epilepsy and recently had a Make-A-Wish experience in Key West as a therapeutic program.
(Photo: Wangyuxuan Xu/Naples Daily News USA TODAY NETWORK - FLORIDA)

In July, shortly after the family’s Make-A-Wish trip, the family faced their next challenge: sending Libby to public school at Pelican Marsh Elementary.

Jenny was scared, asking herself questions about how children and teachers will react and whether Libby will be bullied or if her self-esteem will suffer.

By the second week of school, however, Jenny said she was happy with the measures the school and the district have made to adjust for Libby. Jenny said Libby is happy to go to school, though as a mother her stress never goes away.

“Additionally, for students with health-related needs, student support services partners with all stakeholders and community organizations to improve student outcomes through advocacy, communication, education and collaboration,” Duggan said in the statement.

In a way, Jenny hopes it will open the eyes of the community. Between 2 and 3 million Americans, or 1% of the U.S. population, have epilepsy according to the American Epilepsy Society, and Jenny wants more people to be aware of those who have the condition and how they can best respond if they see someone having a seizure.

But, like everything else in Libby’s life so far, “We need to see,” Jenny said. “Every hurdle we’ve gone through so far, she’s surprised us.”

Libby’s seizures take tolls on more than Libby — they affect Jenny and Daniel, too. At first, Jenny said, the seizures were isolating. It felt like nobody else got it, like a whole new world.

At the same time, it also showed Jenny that people — like little Libby-Lu — can live with seizures and still be an incredible person, she said.

“We can’t just do what we want anymore,” Jenny said. So much thought has to go into everything the family does, like a full-time job in addition to her other responsibilities.

“She pushes us to be stronger,” Jenny said.

But the payoff for all that hard work? Libby’s smile.

Andrew Atkins is a Features Reporter with the Naples Daily News. Contact him via email at andrew.atkins@naplesnews.com or on Twitter at @andrewjatkins.

Share
Enjoy a limted number of articles over the next 30 days
Subscribe Today
Log In
Subscribed, but don't have a login?
Activate your digital access.
Join the Conversation
To find out more about Facebook commenting please read the
Conversation Guidelines and FAQs

“You can never relax,” Jenny Whittles said. “It’s constant anxiety for us as parents.”