The Marco Cruise Club celebrated its 43rd Annual Change of Watch and Commodore’s Ball on Jan. 16 at the Marco Island Yacht Club. 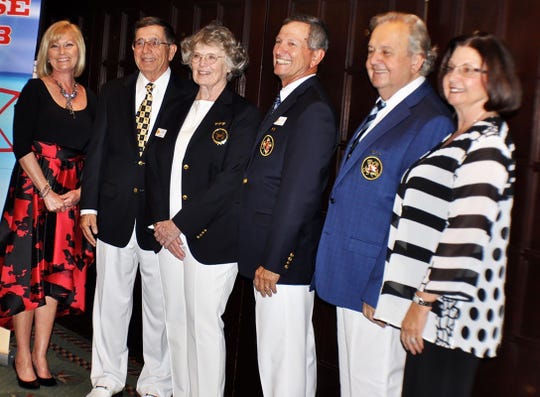 The Marco Cruise Club celebrated its 43rd Annual Change of Watch and Commodore’s Ball on Jan. 16 at the Marco Island Yacht Club.

The Marco Cruise Club has been part of island life since the late 1970s, shortly after the Deltona development days that set most of the island’s infrastructure.

Members enjoyed sunset cocktails and hors d’oeuvres on the verandah overlooking the Marco River and the Jolley Bridge. Dinner followed in the Harbor Dining Room. After dinner it was time for the change of watch ceremony, signifying a change of command from one commodore to the next along with a new bridge of officers.

“We became members of the club in 2001 and have never regretted one moment,” said Procopio. “We go on trips to Sanibel, Sarasota, St. Pete, Key West and other locations, spending two or three nights on the boat. I enjoy the sunset cocktails on the beach, the barbecues, luncheons, fishing contests, raft- ups and all of the varied activities of the club. I am honored to serve as the MCC Commodore for a second term.”

The Ball continued into late evening with lively dancing to the music of Nevada Smith.

Marco Cruise Club continues to be a very friendly, welcoming place for newcomers, as well as, salty veterans who enjoy good boating times and a variety of social activities.  For more information, visit the club’s website at www/marcocruiseclub.com or email dprocopio@aol.com.