In this corner: Carlisle residents throw punches for better health at Title Boxing Club in Naples

In this corner: Carlisle residents throw punches for better health at Title Boxing Club in Naples

She was happy to learn that about herself when she and other Carlisle residents made their way to Title Boxing Club in Naples for their first Rock Steady Boxing class, which the club offered free.

“I thought I was coming to watch,” Poirier said, but she enjoyed it anyway. 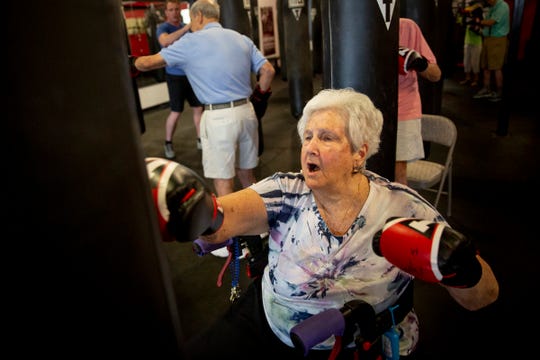 Parkinson’s disease is a progressive nervous system disorder affecting movement, according to the Mayo Clinic. That can manifest as tremors, slowed movement, rigid muscles and impaired balance, among other symptoms.

“They’re very committed to our association,” Goldfield said. “Many of our members use the Rock Steady program and have had incredible results.”

The workouts are also something that brings people together, she said. It can help to be around other people with Parkinson’s and it can also be a fun way for caregivers and family members to get involved. It also mitigates the effects of Parkinson’s.

“There is no cure for Parkinson’s,” Goldfield said. “Studies have shown that the only thing that slows the progression of Parkinson’s disease is exercise.” 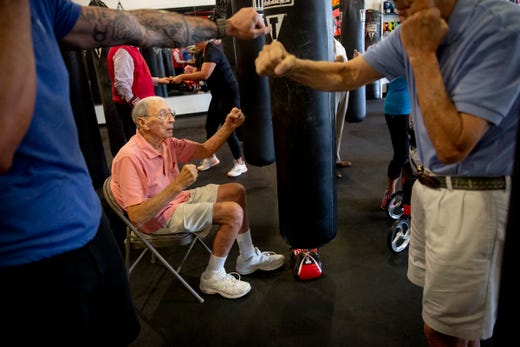 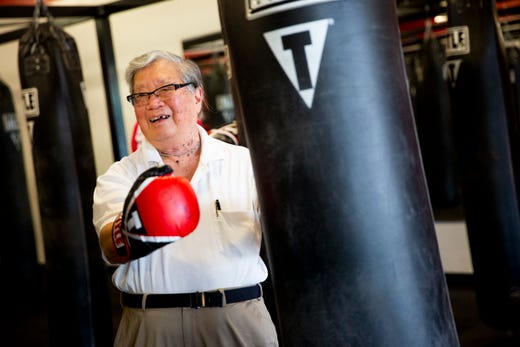 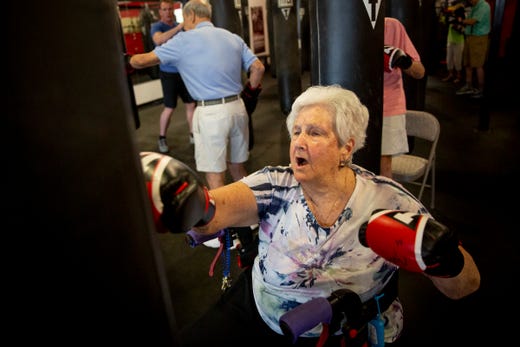 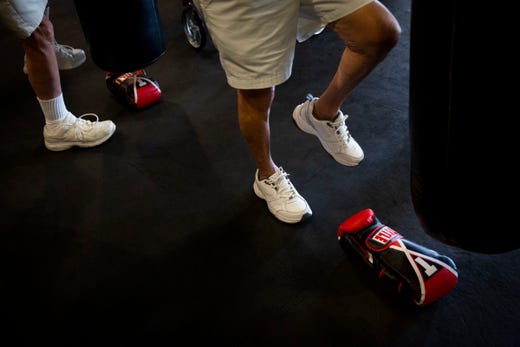 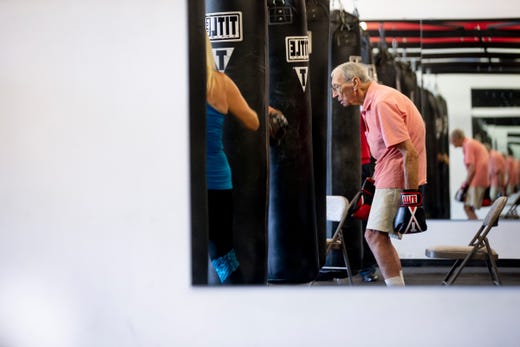 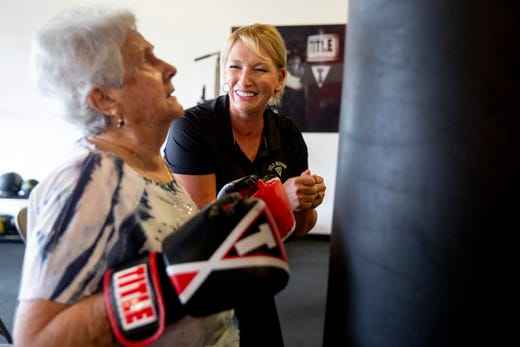 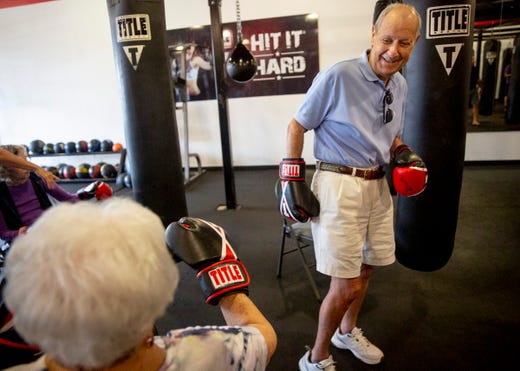 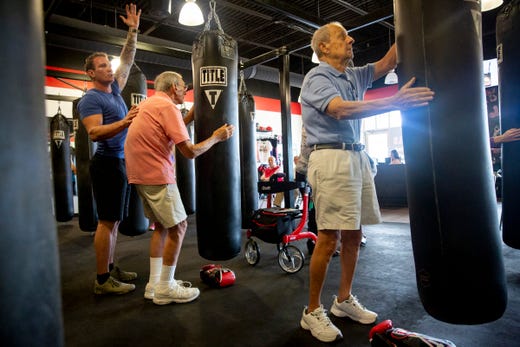 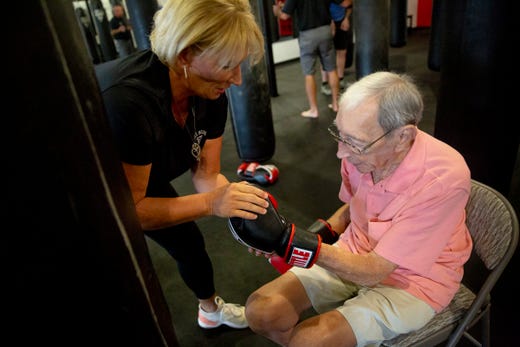 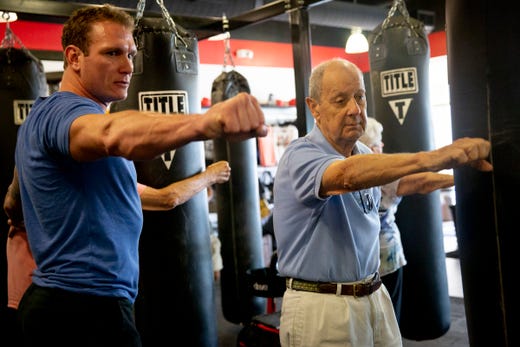 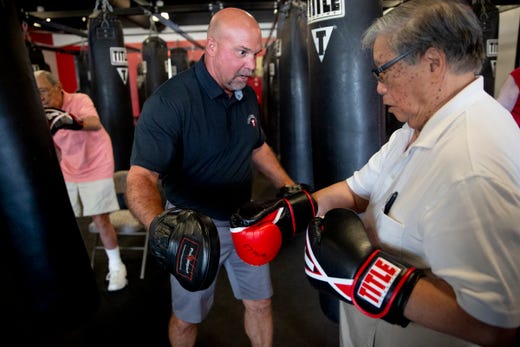 Not everybody who headed to Title Boxing Club from the Carlisle on Tuesday had Parkinson’s.Some did though. Debbie Wiecek, 66, for example.

Wiecek, like her peers, didn’t plan to go down without a fight as she worked at one of the dozens of bags at the gym. She said she struggles most with her balance.

“When I get up there I’m kind of wobbly,” she said.

On a personal level, exercise has helped bolster her balance and stability. The key, she said, is to keep at it.

“Like any good sport, you have to do it on a regular basis,” she said. “You get what you put into it.”

Wiecek said she’d also like to see the fear of Parkinson’s among her age group subside, as there are ways — like exercise — to combat its progression.

In case you missed it: Naples gym kicks off its Power Over Parkinson’s fitness class

Go with the flow: Naples, Bonita classes take workouts to the Gulf of Mexico

Melissa Christiansen-Kloss, an assistant with the Carlisle who accompanied the eight seniors to the class, was brought to tears seeing the joy on the residents’ faces as they threw jabs, crosses and uppercuts.

“It’s hard to see some of them decline,” she said, also noting how the class brought some of them together. “It sort of beats the alternative of aging by yourself.”

Even family that wasn’t there got to be in on the action: Poirier had a trainer take a video of her punching the bag to send to her daughter.

Title Boxing Club owners Jennifer and Mike Johnson said they got Rock Steady in their gym because they saw a need among their clientele.

Some clients in the Rock Steady program, Jennifer Johnson said, have even worked their way from that program into one of the traditional workout classes.

“You start to form really good bonds with everybody, too,” she said. “It’s more like a family."

Andrew Atkins is a features reporter with the Naples Daily News. Contact him via email at andrew.atkins@naplesnews.com or on Twitter at @andrewjatkins.

In 2018: ElliptiGO, the 'outdoor elliptical,' is latest fitness trend in Naples