Prince Harry gets a stab to help de-stigmatize testing for HIV and AIDS. 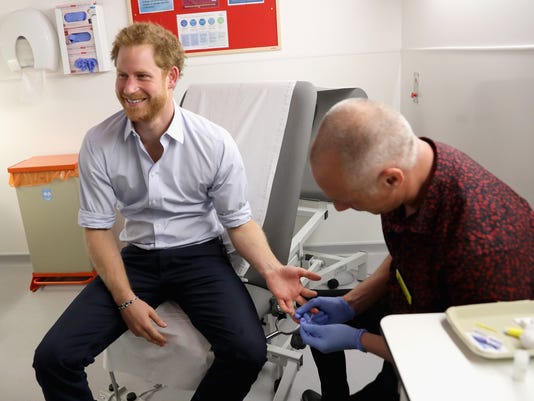 Prince Harry gets his finger pricked by psychotherapist Robert Palmer as he takes an HIV test during a visit a clinic in London on July 14, 2016.(Photo: Chris Jackson, Getty Images)

Hold out your finger, Your Royal Highness, this won't hurt a bit.

Meanwhile, people all over the world could watch Harry get his finger pricked after Kensington Palace posted a Facebook Live video on its Facebook page and on Twitter of Harry meeting with psychotherapist Robert Palmer at the Burrell Street Sexual Health Center in South London.

"Once you get people through the door, that's the hardest bit right away," Harry said to Palmer, who administered the finger-prick test.

It's quick, free and easy! Join Prince Harry and get tested →

The visit is part of Harry's latest royal patronage campaign, aimed at focusing more people of his generation (he's 31) on HIV and AIDs. He's hoping to de-stigmatize the disease and trying to promote the new and much more simple test for it. Until everyone feels relaxed about taking HIV tests, the stigma and fear will continue to allow the spread of the virus, he says.

"It's amazing how quick it is," said Harry about the test; his results were negative.

In the video, Harry encouraged people to get tested, even those who don't think they have been exposed. He also talked about what happens if the test result is positive, and that such a result is not necessarily a death sentence.The test itself is no big deal, he suggested.

"It's better that everyone goes and gets tested. Why wouldn't you?," the redhead royal said. "Whether you're a man, woman, gay, straight, black, white, whatever, even ginger, why wouldn't you come and have a test?"

The health center he visited is located in an area of London with the highest rate of HIV positive patients in the U.K. Kensington Palace said in a statement that one of the reasons HIV rates in the U.K. continue to rise is that up to 17% of HIV-positive patients are unaware of their status and so can unintentionally pass on the virus to partners.

HRH will share a stage with @eltonofficial - an advocate for people with HIV & a leader in the fight for testing, treatment, and prevention

Worldwide as many as 17 million people are unaware that they have HIV. Late diagnosis also means people are not getting the early treatment that allows them to lead healthy lives.

Next week, Harry will take his campaign global when he speaks at the World AIDS conference in Durban, South Africa, and shares a stage with his late mother's old friend, the anti-AIDS activist and rock star Elton John.