There has been a shift in sales from high-end homes near the beach to homes under $500,000 in neighborhoods east of the beach, the Naples Area Board of Realtors reports.

In May, closed sales in East Naples rose by more than 21% over the year. There were 174 sales, up from 143 a year ago, according to NABOR's monthly report.

The report tracks all sales made though the Southwest Florida MLS, excluding Marco Island.

"Naples Reserve, for a new community, is probably one of the busiest new communities that we have in all of Collier County right now. They have a lot of different products at a really good price point," said Brenda Fioretti, a broker for Berkshire Hathaway HomeServices/Florida Realty in Naples.

The good price point in the Bayshore area, she said, has made it popular among buyers too.

The percentage increase in sales in East Naples in May was higher than in any other geographic area in Collier County.

"A lot of it has to do with price," Fioretti said. "There are still good values down there, and they haven't risen up to the south Naples and North Naples pricing."

East Naples is attracting a mix of buyers including young families and older seasonal residents including retirees.

"When somebody buys a house in Florida their first choice generally is to buy something new," Fioretti said. "There is some nice new product down there to entice them." 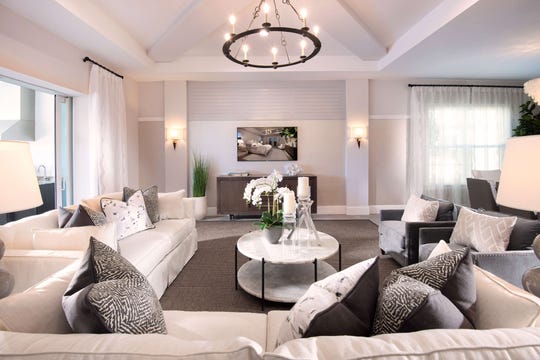 The East Naples area has seen a surge in commercial construction including new retail shops and restaurants.

"I can tell you that I believe the East Trail is going through a transformation," said Mike Hughes, a vice president for Downing-Frye Realty in Naples, in an email. "I believe that this bodes well for housing in close proximity to the Trail," he said.

He's keeping a close eye on communities just east of Collier Boulevard and U.S. 41, where he expects to see continued demand from home buyers, he said.

So far, 2019 has been a strong year for home sales in Collier County.

"Actually we are kind of surprised that April and May were very strong — and stronger than January and February. The season is stretching into the spring," Fioretti said.

She expects June to show positive numbers too when they're tallied. At her company, she said, the number of showings surged last month, when compared to where they were at a year ago.

In May the total number of homes sold in the Naples area increased 9.8% to 1,165, up from 1,061 in the same month a year ago, according to NABOR's report. Those numbers include all types of homes: single-family, condominiums and other multi-family residences, such as townhomes.

"Collier County seems to be ahead of most of the other markets in the state," Fioretti said.

She offered up one reason the county might be doing better than many other markets in the state, especially on Florida's east coast. Some areas, such as Miami and Fort Lauderdale, have been overbuilt, she said.

In the Naples area asking prices are coming down.

NABOR reports that more than 2,000 sellers reduced their list prices in May.

The median is the price at which half the homes sell for more and half for less.

Meanwhile, sales for higher-end homes between $1 and $2 million declined 8.9% over the year. Asked why, Fioretti said it may be an anomaly, due to a spike in closings at Kalea Bay in May of last year. Closings began in early 2018 at the gated, resort-style community off Vanderbilt Drive in North Naples.

Only the condominium market saw a decline in sales in the $1 to $2 million segment, with sales falling by more than 23% percent over the year. For single-family homes in that upper price range, sales rose 3.6% in May.

While buying for million and multimillion-dollar homes.has cooled in some formerly hot areas on the West Coast — especially in  California —  Naples continues to buck the trend, said Denny Grimes, a housing expert with Denny Grimes & Co., in Fort Myers.

"Naples is probably the best luxury market in the country right now," he said.

Crunching his own data, Grimes said single-family home sales in the $1 million to $2 million range were up 11% for the months of January through May in the Naples area, when compared to a year ago. Meanwhile, the Fort Myers area saw sales drop by 21% over the year in the same price segment over the same five months.

While home prices may seem steep in Naples, Grimes said they don't seem so bad when looking at other coastal communities elsewhere in the country.

He added: "Those coastal markets have gotten so expensive it's just making Naples look better."

When it comes to million-plus dollar sales of single-family homes, Grimes said Collier County has outpaced many areas around the country.

"I don't think a lot of markets are growing in those upper price ranges," he said. "Naples is just really strong now."

Whatever the reasons, Collier County has performed better than Lee County in the single-family home market this year, which is a bit unusual since Lee is so much larger in size, Grimes said.

Based on his research, Grimes said single-family home sales were up 4 percent through May in Collier, but down by the same percentage in the Fort Myers area, when compared to a year ago. The Fort Myers statistics are based on sales made by members of the Royal Palm Coast Realtor Association and exclude some parts of Lee County, such as Sanibel.

After seeing four months of declining sales volumes for single-family homes, May was the first month that showed improvement in Lee, with sales growing more than 8 percent over the year, said Josh Burdine, a broker associate for Rockstar Realty in Fort Myers and president of the Royal Palm Coast Realtor Association.

"It's hard to say who those buyers are," Burdine said.

Home sellers have been dropping prices in Lee too, in an effort to attract more buyers.

"The buyers are here," Burdine said. "The buyers are watching and they are waiting. When they see that opportunity and what they consider to be good values, they are making their move."