Vicki Culver’s fitness training program has been scaled back from the historic heights of 15 years ago, but her motto for life and running remains steadfast.

The motto: “People ask what I’m training for and I just say, ‘Life,’ ” Culver said.

Vicki and Michael Culver of Lehigh Acres once were Southwest Florida’s most-traveled running team, running marathons from the Great Wall of China to among the giant redwood trees of northern California and everywhere in between.

The most famous adventure for the Culvers came in May 2001 when they joined 552 runners from 17 countries and five continents for the third Great Wall Marathon in Huangyaguan, China, 60 miles northeast of Beijing.

The Great Wall Marathon is considered the toughest in the world. 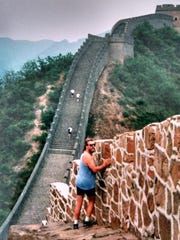 Mike Culver runs on the Great Wall of China. (Photo: Special to the News Star)

“I would call it a failed suicide attempt,” Michael Culver said.

Today the Culver’s have separate retail businesses near each other on Homestead Road, maintaining a limited running schedule with an eye on keeping physically fit.

“We all get old and now I’m watching my knees after the extensive running,” Vicki Culver said. “When Michael recently curtailed running that in turn became part of my slowing down.”

“I still run four days a week and do a lot of fast aerobics work at the Lehigh Lifestyle Center,” she said. “We have thought about returning to Key West for one of their distance races.”

Like many recreational runners, the Culvers started running almost by accident.

“I quit smoking nearly 30 years ago, gained weight and turned to aerobics and running,” said Culver, 69, who moved with Michael to Lehigh in 1982.

“I simply got hooked on running and my first marathon in Key West came about after I watched another woman finish the race and I told myself, ‘I can do that.’

“The first couple of races I never paid attention to where I finished, failing to realize I had won awards,” she said.

“Running became a way for us to spend time together, away from the business,” Michael Culver said. “Until we slowed down our normal routine consisted of daily four mile runs around the old Admiral Lehigh Resort or Veterans Park.”

The most vivid memories of distance races are the Great Wall Marathon and the Garden of the Gods 10-mile race in Colorado Springs at 6,000 feet.

“They send you a tape of the previous Great Wall race and that scares you,” Vicki said. “They wanted you to know about the tough conditions and the physical part was unbelievable.”

The Great Wall Marathon is a shock even to seasoned marathon runners. Due to the uneven surface of the Great Wall, as compared to flat terrain in the United States, and having to cope with 3,600 uneven steps that vary from shallow to steep, the test is both physical and mental.

“There were parts of the Wall you had to climb on all fours it was so steep,” she said.

“Then in other areas, there was a wall on one side and if you slipped you were looking at falling right off the top of a mountain.”

“The Garden of the Gods 10 miler was so steep at such a high elevation, I think we averaged a 10-minute mile pace,” she said. “I drove the car up and around the course the day before the race and the car had a hard time making it to the top.”

“I always said I just want to die healthy,” he said.