Greater Naples Fire Rescue District welcomed the communities to join in the dedication ceremony of Boat 90. 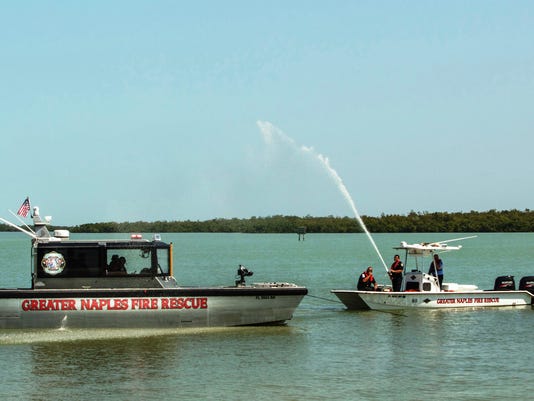 Newly launched Greater Naples Fire /Rescue Boat 90 and its sister Rescue Boat 60 from Everglades City pass in review for in-service and wet-down in front of the crowd of people gathered for the Boat 90 dedication service on the Isles of Capri.(Photo: Jim Hughes/Special to the Eagle)

It is official – new fire/rescue boat 90 is in service

Greater Naples Fire Rescue District welcomed the communities to join in the dedication ceremony to officially place their new nearly half-million dollar fire/rescue Boat 90 into service for the greater Naples area at 11 a.m., Friday, May 26, at Fire Station 90 located at 175 Capri Blvd.

“This 38 foot aluminum hull boat is equipped with state of the art firefighting and rescue equipment capable of safely transporting crew members and victims in a fully enclosed pilot house,” said Greater Naples Fire Chief Kingman Schuldt, to the crowd who gathered on this bright sunshiny day. Evident was a great deal of curiosity as well as an air of excitement among residents, guests and staff. 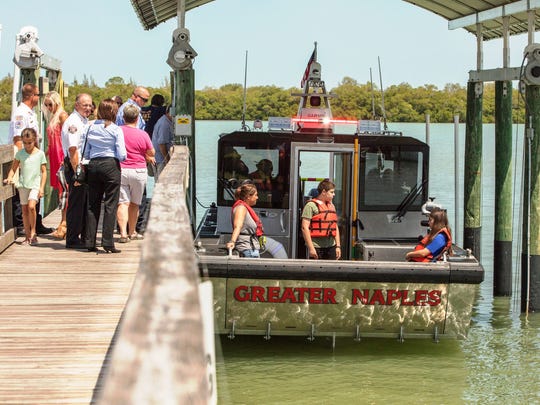 After the cookout, guests who attended the Greater Naples Fire /Rescue Boat 90 dedication ceremony were offered a ride on the new state-of-the art vessel. (Photo: Jim Hughes/Special to the Eagle)

“Boat 90 is capable of providing advance life support medical care, flowing firefighting water at more than 500 gallons per minute, providing firefighters with quick access to beaches via bow access and is capable of locating victims in the water from its forward looking infrared camera (FLIR). Boat 90 is a unique asset and will greatly enhance marine based fire rescue capabilities within the District’s waterways.”

After Chief Schuldt’ s opening remarks, the Pledge of Allegiance,” and the invocation provided by Chaplain Jack Strom, Boat 90 received “in-service tones” and “wet-down,” terms used that describe christening and preparing an emergency service apparatus to be placed into operation.

Chief Schuldt recognized and thanked numerous dignitaries and support staff from many walks of service for their dedication and actions that made this day possible.

“Without the assistance of the Marco Island Fire/Rescue Marine Service, we would not have had a boat in the area to assist in emergencies.”

“I cannot say enough about the work done by our own Lieutenants John Taylor and Tim Garner in this project,” said Chief Schuldt. “They formed the team; designed the boat; put the training in place and we now have 19 well-trained boat operators for Boat 90.” A crowd of locals and guests gather at Greater Naples Fire/Rescue Station 90 on the Isles of Capri on Friday, May 26, to officially dedicate the new Fire/Rescue Boat 90 and to launch it for its mission of providing emergency services on the water. (Photo: Jim Hughes/Special to the Eagle)

Of the five Fire/Rescue marine service providers (North Naples, City of Naples, Greater Naples, Marco Island, and Everglade City), between Boat 90 (moored on the Isles of Capri) and Boat 60 (moored at Everglades City), Boats 90 and 60 receive the most calls. According to Chief Schuldt, Boat 90 was placed in service two weeks prior to this ceremony, and already has been out on three response calls.

“This is not even season,” said Schuldt. “I can only imagine what it will be like once the season begins again.”

The new boat 90 is a Metal Shark – the first design that Metal Shark has made like it. Metal Shark is the largest marine vessel manufacturer in the United States and is located on the Gulf Coast of Louisiana. Metal Shark builds vessels for the U.S. Coast Guard, Navy, Airforce and Army.

Immediately following the Fire/Rescue Boat 90 dedication ceremony, the staff of Greater Naples Fire cooked hot dogs on the grill complete with chips and soft drinks for attendees. (Photo: Jim Hughes/Special to the Eagle)

“Our Boat 90 is one-of-a kind” and the “largest Fire/Rescue boat in Collier County,” said Chief Schuldt. The vessel needs only two feet of water to operate, and can run up to a speed of 40 miles per hour.

“I tell the boat operators, I don’t want to know that,” said Chief Schuldt with a chuckle. “She is not much to look at, and only a mother could love her enough to call her beautiful, but she is a work horse,” said Schuldt.

Boat 90 is powered by two 300 HP Mercury outboard motors. She is well suited to extreme conditions and has radar to allow her 360 degree visibility. She holds 400 gallons of fuel and can transport multiple victims. The boat itself cost $398,000 and extra equipment cost $75,000.

Last weekend, Schuldt and his staff hosted a Los Angeles Special Operations chief who wanted to check out Boat 90. After only a few minutes on the boat, their operations chief said, “We are going to buy two of these!” said Chief Schuldt.

At the closing of the ceremony, and with the back drop of a lone manatee swimming under the fire boat dock, Chaplain Strom offered these words: “Keeping with the Greater Naples Fire/Rescue values of professionalism, integrity, and compassion, we bless this boat … may she provide the best protection of life and property and safe rescue. We pray for her providers of protection and others whom she will help in rescue service.”

The highlight of the day was the tour provided for all who wanted to ride on this historic boat. After signing the release form and adorning a life jacket, the tours began. Needless to say, my husband and I were among those who took the ride. It was exhilarating and informative. Our boat operators explained the equipment and how the design was carefully orchestrated to meet the needs of victims in water accidents, near drownings, boat fires, and the likes. In addition, Greater Naples Fire staff cooked hot dogs on the grill, offered chips and a soda and thanked all for attending.