Like the Marines, Condee is looking for a few good men – or women.

Condee Cooling and Electric, Inc. wants to grow their operations – again. The island’s largest, longest-established air conditioning contractor is looking to hire, and working with city government in an attempt to add to and modernize their facilities.

Five years ago, they invited the Chamber of Commerce for a ribbon cutting on their last major expansion. Now they want to implement the first phase of a planned three-phase process to add more space for, among other things, their vehicle maintenance operations, machine shop and warehouse space, said company vice president and operations coordinator Donald “Erik” Condee.

Finding potential employees with the right skills, or the aptitude to pick them up through apprenticeship and on the job training, represents the company’s biggest challenge, said Condee. 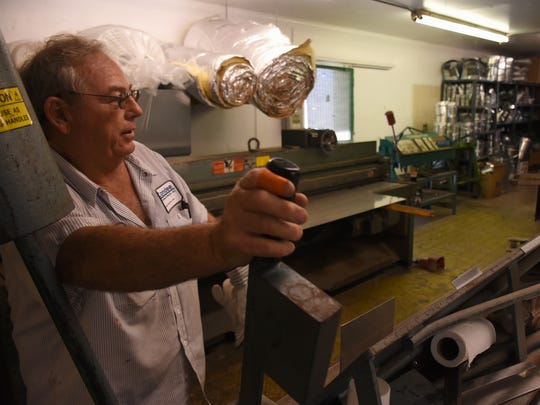 “We are always looking for talented people, people who want a career and not just a job,” he said. “These days, schools push everyone to college, and people don’t learn technical knowledge.” A bachelor’s degree in philosophy probably qualifies one for a job as a barista at Starbuck’s, but the rewards of practical education can be much more concrete.

“We’re looking for anyone who can help us grow. If they’re mechanically inclined, drug-free and have a clean driving record, they can come to work here and after a few years, be earning a six-figure salary,” said Condee. Of course, they should be willing to sweat a little. The company’s work, mostly focused on maintenance of existing air conditioning equipment, sometimes involves getting up into attics in the summer heat. 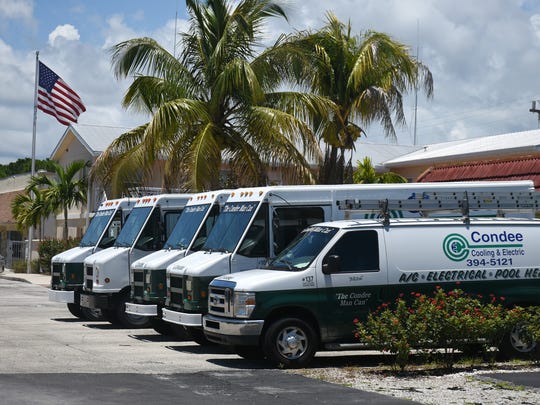 But the company’s principals have done the work themselves, and realize they must treat their employees well to keep them on the job, happy and productive.

“I started emptying trashbins and sweeping floors,” said Condee. “I was going to work with my dad and sitting on his lunchbox. I have all the technical knowledge” to act as a technician. “Can my guys, who are doing it every day, do it faster? I wouldn’t disagree.” The company provides ongoing education for their technicians.

After talking with a reporter in his office, Condee escorted him to the company’s machine shop area at the company campus on Front Street, to talk with Condee Cooling president Donald E. Condee II, who is also Erik’s father. Don II’s father was also company president and had the same name, so one can understand why Erik, whose name is also Don – “but with a different middle name, not Don III” – goes by Erik. 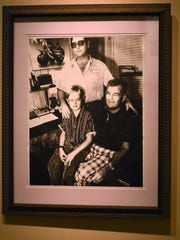 Don Condee II was wearing workmen’s clothes, bending over a massive apparatus called a brake, bending sheet metal such as that used for ductwork.

“I’ve done just about every job here, so I know, there has to be a reward,” he said. The company, in addition to pay scales above the area standard, offers health insurance with 90 percent of the premium paid, 100 percent-paid dental insurance, long-term disability and life insurance, and a 401K program.

“We do a dollar to dollar match up to four percent of salary,” said Erik. “These are major things you often don’t see offered at white collar jobs these days.” As a result, he said, their employees tend to stay with them.

“Our average tenure is over 10 years, and when we do have turnover, it’s usually family stuff, out of our control.” The company currently employs 60 fulltime employees, and even provides housing for some of them, in apartments built above the company offices, which he said is a useful recruiting tool to bring workers from out of the area.

For those 60 employees, Condee fields a fleet of 70 vehicles, and does its own maintenance, which is one of the areas it is looking to expand in the plans currently before the city.

“We went to the Planning Board in January, and it’s just taking a long time, with the staff turnover the city has had,” said Erik. “But we’ve always had a great relationship with the building department.”

The family operation opened on Marco Island in 1969, headed up by Don Condee, Sr., coming from an established contracting business in Illinois started by his father in 1918. On Marco, they have gone from 1,000 square feet of office space to 6,000, and need more to handle their growth.

Proudly proclaiming themselves the “longest standing family business in Marco Island,” the company does about 80 percent of its work on the island, but covers the entire Naples area.

Contrary to the business cycle for most island companies, Condee is now at their busiest time of the year, said Erik Condee.

“Businesses and condo buildings want to get their work done when it doesn’t impact them as much. We’re doing six or seven change-outs a day.”

While his father is company president, Erik has become the “face of Condee” on the island. He is ubiquitous at charitable events, running logistics for Chamber of Commerce events, and the Meals of Hope packaging marathons. Next year, he will be Chamber president.