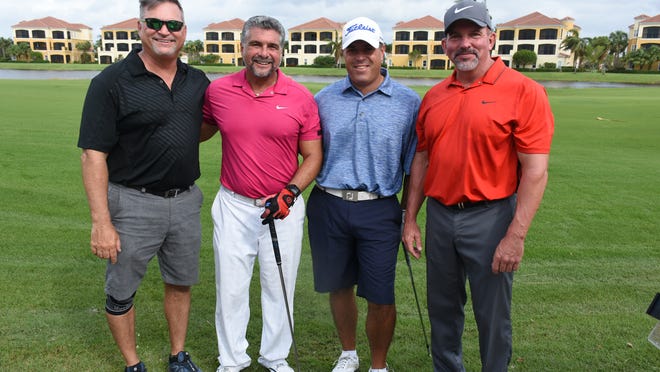 This year, the Marco Police Foundation annual golf event had a new venue, and a new name.

The event was held last year at the Island Country Club, and in 2015 at Eagle Creek, but this Saturday, the MPF held their major fundraiser at the JW Marriott Hammock Bay layout off of Mainsail Drive. And MPF President Dick Adams said the outing was renamed the Dick Shanahan Memorial Tournament.

Shanahan, who passed away a year ago, chaired the event numerous times, and served as foundation president in 2005, 2006, 2008 and 2009. Banners with Shanahan looking dapper in a tuxedo adorned the putting green, where golfers contributed to the cause by ponying up for the chance to sink a long putt.

They also had the chance to win $10,000 for a hole in one on number 7 – pros not eligible – and prizes including Callaway irons, a 50-in. smart TV and a $500 Visa card for other holes in one. Those prizes all went uncollected.

The winning foursome in the best ball scramble, with a score of 16 under par, went to the team of Mike Kelly, Charles Lostracco, Jerry Guidish and John Acunto. Second place, at 13 under, went to Sean Shea, Marc Canady, Joanie Hickey, and Ron Hughes.

The winning ladies’ foursome was Pam Pettil, Mary Appolina, Anne Landis and Camille Giblin, but their challenge was eased by being the only all-female foursome. Appolina also won for longest drive.

The field of 84 golfers was “remarkable,” said Adams, given the forecast of rain, and the lingering effects of Hurricane Irma. A welcome SPF 16 overcast kept the day from feeling too hot.

The MPF tournament traditionally supports the scholarship fund of the foundation, but in light of the storm, said Adams, the group was exploring options for sharing the proceeds with relief organizations. No decision had been made at press time, and the final tally was not tabulated.

As the golfers “played around,” work crews were busy manicuring the course back to the condition expected at a JW resort, with heavy equipment and laborers taking down trees and reconfiguring sand traps. A large amount had already been accomplished, said Hammock Bay golf professional and tournament director Alex Genschoreck.

“If you saw it the day after the hurricane, you’d be shocked. They’ve done an amazing job putting the course back together,” he said.