Knocked down, but not out: Marco's Civil Air Patrol returns to the skies

Marco Island's Civil Air Patrol (CAP) squadron was back in the skies on Oct. 7, less than one month after Hurricane Irma destroyed its hanger.

Knocked down, but not out: Marco's Civil Air Patrol returns to the skies 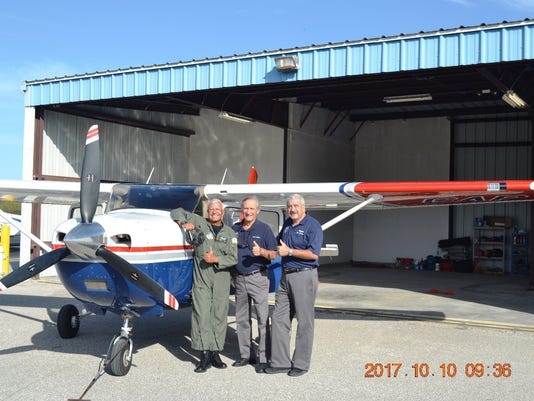 From left: Bob Boone, Dave Dumas and Bob Corriveau back on the job at the temporary hangar.(Photo: Submitted)

Marco Island's Civil Air Patrol (CAP) squadron was back in the skies on Oct. 7, less than one month after Hurricane Irma destroyed its hanger.

The front face of the hangar, facing east into the strongest winds of Irma’s eye wall, was torn from its framework of steel girders and shoved to the back of the space, remaining in one piece and not losing its shape. The roof and side walls of the hangar were shredded, with the frame crumpled up like steel spaghetti and the aluminum panels scattered all over the ground.

Fortunately, the squadron’s brand new Cessna 182 airplane, with upgraded electronics and the G-1000 computerized cockpit, was away in Daytona for maintenance, although it would have been routinely flown away out of harm’s way in any event.

Immediately after Irma, CAP stationed the Marco plane and several other aircraft at the Punta Gorda Airport; there, CAP's mission pilots and mission radio operators performed aerial reconnaissance missions for the Federal Emergency Management Agency (FEMA) in response to Irma.

Meanwhile, CAP secured a temporary hangar for its aircraft from squadron member 1st Lt. Bill Rodgers. This allowed the CAP plane to return to the island on Sunday, Oct. 1.

All hands were on deck during that first week of October to perform the following: wash and polish the plane to prepare it for further assignment; secure the plane in the temporary hangar; install a temporary radio station and antenna at the south end of the airport terminal building, under the direction of assistant communication officer Major Jim Carrender; and test and approve the communications system, allowing the squadron to be on schedule and ready for its first coastal patrol mission on Oct. 7.

“Communications are vital to our missions," Marco Squadron Commander Bob Corriveau said. "Our aircraft needs to report its activity to mission base every 15 minutes, so without a radio station, missions cannot be performed."

Bringing the squadron back to operational readiness would not have been accomplished without the assistance of Collier County Airport Authority Manager Justin Lobb, who provided the temporary radio room. 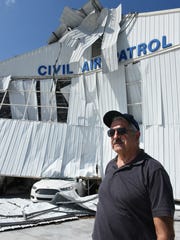 "We have a long and friendly relationship with the Civil Air Patrol (CAP) and will do whatever we can to facilitate their getting back to normal operations," Lobb said.

Within the next few weeks, the destroyed hangar section of the CAP building at Marco Executive Airport will be cut away and removed. Once that has been accomplished, bids will be solicited for rebuilding the hangar.

“We have insurance, but not enough,” Corriveau said in a previous interview. “We’re not covered for catastrophic events like this.” Although the Civil Air Patrol is an arm of the Air Force, a civilian component of the U.S. military, government funds will not cover the necessary work. “It’s our responsibility. The entire coastal patrol is funded by donations. It’s not funded by the Air Force.”

Fourteen years ago, CAP was able to fund and erect its building and hangar through the generosity of the Marco Island community and CAP members. The facility was the pride of the Florida Wing and envied by CAP squadrons across the county. At that time, the gold star standard was to build for a Category 2 storm; the new hanger will be built to current code specifications.

Now CAP is once again turning to the community for help. For information about supporting the hangar rebuilding project, contact Corriveau at 508-922-8121 or make a check payable to Marco Island Civil Air Patrol, PO Box 225, Marco Island, FL 34146.

Since the Civil Air Patrol is a 501(C)(3) organization, donations normally are tax deductible for those who itemize deductions.