The old-timey fishing village of Goodland might be considered by some the black sheep of the Marco Island family. 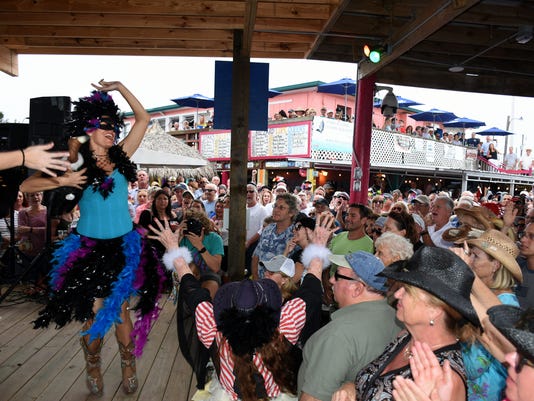 The old-timey fishing village of Goodland might be considered by some the black sheep of the Marco Island family, the slightly scandalous cousin that’s only whispered about. Tucked away outside the city limits, but still physically on the island, Goodland has a laidback vibe, and a relaxed attitude toward what are considered vices.

On Sunday afternoons, Goodland puts its attitude on display at Stan’s Idle Hour. But one weekend a year, they go all out, and hold the Mullet Festival. The 34th annual festival was this weekend, and bikes, beers, and the big blowout comes on Sunday, when the Buzzard Lope Queen is crowned.

Gray, breezy skies and a forecast of thunderstorms couldn’t put a damper on the festivities, and well before the climactic event of the Buzzard Lope dance contest and the crowning of the Buzzard Queen, the place was jampacked. Goodlanders living nearby collected $10 for parking spots, and the crowd filled the outdoor dining area and spilled onto the second-floor balcony.

Only four contestants vied for top honors, winning $100, a trophy, and the right to have their name emblazoned on the weather-beaten wall with former queens. A few of those came up onstage before the actual contest, and treated the crowd to a few dance steps.

“Looks like she’s on dope – she is doing the Buzzard Lope,” went the song, sung again and again by emcee Jeff Hilt backed up by the Joel Fry Band, as the contestants gyrated in turn. One of the contestants seemed to have made a last-minute, possibly alcohol-fueled decision to enter the contest, did not wear the buzzard costume that is a big part of the contest, and actually fell during her dance.

The costumes are all about flash and trash, heavy on feather boas, sequins and Carnival masks, and the winner for best costume is awarded the same $100 bill that goes to the queen overall. Sunday, “Fancy Nancy” Young, visiting from Michigan, won the whole thing, winning Best Costume for her black feathered outfit, complete with oversized bird feet, and in an upset, beating out hometown Goodland favorite Angie Miller to win as Buzzard Lope Queen.

All of the contestants received $50 and free “watered-down” drinks, said Hilt.

Marco Island firefighters sold hotdogs and bratwursts in a benefit for North Naples Fire Captain Andy Marfongella. “Queen Mary” took her accustomed place at the edge of the stage, posing for photos and, even at 78, groping the emcee or any performer who came close enough.

This was the sixth Mullet Festival since the passing of Stan’s namesake and festival founder Stan Gober, whose name is memorialized on the bridge connecting Goodland to the mainland, said Steve Gober, Stan’s son and current owner of the restaurant. Steve declined to guesstimate how much extra beer etc. they would go through over the festival weekend, and expressed gratitude and satisfaction that the tradition continued with such a strong turnout. Stan, he said, would have approved.

“Look at the weather – it was supposed to be horrible,” he said, crediting his father’s spirit. “I think he’s here.”

Goodland took a nasty hit from Hurricane Irma in September. One of the casualties was a treasured relic from the Mullet Festival.
Each year the white-bearded Stan Gober donned his own flashy buzzard costume for the festival, along with a feathered headdress, buzzard mask and buzzard feet. After he died, the costume was displayed in a corner of the restaurant.
Unsentimental Irma swept it away.
But what Irma could not swipe from Goodland was the legacy Stan Gober left behind, or the enthusiasm of the thousands who swarmed to his restaurant over the weekend.
“It was what he lived for,” Steve Gober said of his father and his Mullet Festival. “It was his day.“