“This just goes to show, you can’t keep a good village down,” said Tara O’Neill. 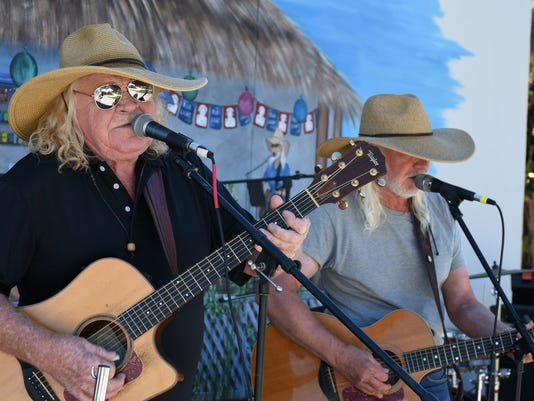 “This just goes to show, you can’t keep a good village down,” said Tara O’Neill.

The president of the Goodland Arts Alliance – “they made me do it,” she said – O’Neill was standing in her booth at the sixth annual Harbor Arts & Music Festival, thinking about all the progress Goodland had made since getting slammed by Cat-4 Hurricane Irma last September, coming off the Gulf of Mexico to make landfall in a direct hit.

On the stage in front of Chuckles’ Chickee Bar, a succession of local pickers assembled by Marco music maven JRobert provided the music portion of the arts and music fest, playing to appreciative audiences sitting under the shade of portable canopies on a beautiful Saturday morning.

The number of artists and craftspeople exhibiting their work was down from previous festivals, with 21 vendors versus approximately 35 last year, said Goodland Arts Alliance (GAA) vice president Judy Wittwer, showing her creations including fanciful parrot heads painted bright colors, fashioned from stone crab claws (once the meat inside was consumed). Locals had had other things than art on their minds in the storm’s aftermath, said O’Neill.

“A lot of artists lost their homes, and couldn’t even come back (to Goodland). I lost four months of creating,” and is still wrangling with her insurance company over her house that had a banyan tree come down through it, she said. “It’s hard to focus on painting when people are digging mud out of their houses.”

Tim Cotter of Fancy Fishy looks at the mermaids he made from discarded lumber, and they look back at him. The Goodland Arts Alliance hosted their annual Harbor Arts & Music Festival Saturday and Sunday at Margood Harbor Park in Goodland. Lance Shearer/Correspondent
Fullscreen 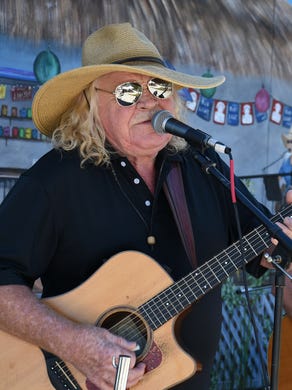 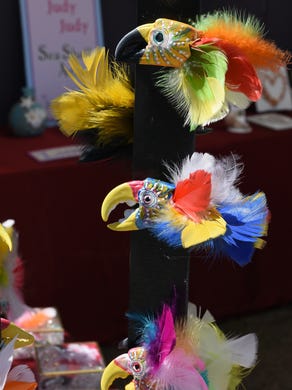 The artists who did exhibit had positive feedback when Tara, as GAA president, made her rounds and surveyed them for their opinions – and that was on Saturday, before the regular Sunday afternoon blowout at Stan’s brought the expected wave of free-spending off-island visitors.

“I’m changing my response from ‘pretty good’ to ‘really good.’ I just sold three prints,” said photographer Andrea Cooper. The food vendors who had plied their wares around the corner at previous festivals were another casualty.

Volunteers including Margi Fortune, Barry Gwinn, and Jim and Noreen Seeger manned the tent out front at Margood Harbor Park, with its dinghy dock opening onto a picturesque vista, sold tickets for a variety of raffle prizes, and operated the golf cart shuttle service that whisked visitors to the park. Proceeds from the raffles and the tip jars on the shuttles went to provide scholarships for local students.

Having already played his own musical set, JRobert circulated among the crowd listening to Jim Allen and his brother Merrill, and then Billy J and the Big Easy as they played, passing out flyers for the Florida Songwriter Showcase that had its March outing on Monday. The showcase will return on April 2 with Taylor Freydberg, formerly of the Wholetones, Marie Nofsinger and Florida Hall of Fame performer Frank Thomas.

As the T-shirts and bumper stickers say, Goodland, the “drinking village with a fishing problem,” has a proud, fierce, independent and creative tradition. You just can’t keep a good village down.

For more information about the GAA: www.goodlandartsalliance.org, or contact Tara O’Neill, 239-642-0528, or at taraogallery@gmail.com.