30 years of Easter on the beach: Thousands turn out for sunrise service

The thousands who woke up early and got themselves down to the beach in pre-dawn darkness on Sunday morning received a thank you gift in return.

30 years of Easter on the beach: Thousands turn out for sunrise service 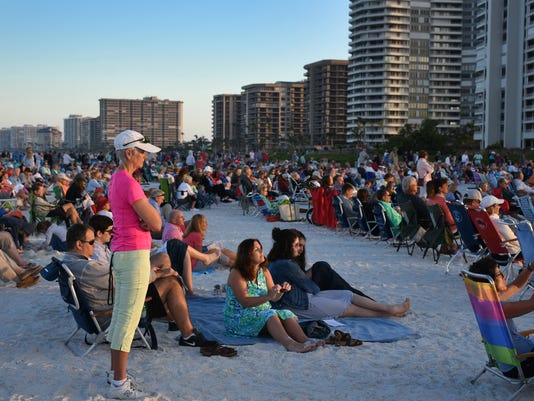 The Marco service is said to be the largest in the state. Thousands came to the beach in predawn darkness Sunday morning for Marco Island's 30th Easter Sunrise Service.(Photo: Lance Shearer/Correspondent)

The thousands who woke up early and got themselves down to the beach in pre-dawn darkness on Sunday morning received a thank you gift in return – a full moon lighting up the western sky, and gradually dipping toward the Gulf of Mexico.

This Easter Sunday marked 30 years of Easter Sunrise Service on Marco Island, a massive but serene gathering of the faithful to hear a message of hope and resurrection. Sitting in beach chairs or reclining on blankets under a beautiful sky, attendees heard from four island pastors, along with local real estate broker Alan Sandlin, who acted as master of ceremonies.

After greeting the crowd with “He is risen,” and hearing a massed response, “He is risen indeed,” Sandlin asked how many were attending the service for the very first time, and how many had been there for all 30 years. Longtime resident Carolyn Vann raised her hand, and explained later she had lived on Marco Island in 1988, then moved to Fort Myers, and finally moved back to Marco, but never missed Easter morning on the beach.

Sandlin, along with his wife Linda, not only attended but sang at that first service 30 years ago. Linda Sandlin sang a solo, “Were You There?” referring to the crucifixion, but also appropriate to more recent island history. She was joined by Dawn Birch for “I’ve Just Seen Jesus,” and the entire congregation was invited to sing “To God Be the Glory” and “Worship Christ the Risen King,” led by Alan Sandlin.

Rev. Casey Nowlin of the Family Church and Rev. Kirk Dreiser of Wesley United Methodist Church delivered opening prayers, with Dreiser whisked away afterward, presumably to prepare for services at his own church, before Rev. Dr. Steve Schoof of Marco Presbyterian Church gave the Easter message, or sermon.

The Marco service is said to be the largest in the state. Thousands came to the beach in predawn darkness Sunday morning for Marco Island's 30th Easter Sunrise Service. Lance Shearer/Correspondent
Fullscreen

Schoof was slated for that role last Easter, but had to bow out for health reasons, and seemed in fine form as he spoke of crying and the importance of names in his talk titled “Can You See Through Your Tears?” When Jesus appeared to Mary Magdalene that morning in Jerusalem, “the very first Easter opened with tears. Mary could not see him through her tears until she heard her name,” said Schoof. “Jesus said one word – ‘Mary.’” That got her attention, stopped her crying, and let her know who she saw before her.  “Jesus knows your name, too.”

In his closing remarks and prayer, Rev. Thomas McCulley of New Life Community Church said that, while his church maintains the community cemetery along Bald Eagle Drive adjacent to their sanctuary, “the second coming of Christ will end our responsibility,” and then “where will you spend eternity?”

Before the service, longtime Easter Sunrise Service accompanists John and Sandy Stein, on keyboard and flute, played a musical prelude, garnering applause from the crowd sitting silently on the beach. There was plenty of room for the throng of worshippers, and the sound carried easily to the water’s edge, where those seeking a little more space or family togetherness made little groupings in the half light. Out in the gulf, a spectator fleet of about 65 boats sat anchored in the calm waters.

Children dozed in their parents’ laps, and a lot of people who don’t generally get out on the beach before sunrise got a chance to see how beautiful the world is, particularly early in the morning with the moon setting over the water.

Before and after the service, MIPD officers and volunteers they pressed into service, including Lou Prigge and Dick Adams of the Marco Police Foundation, helped pedestrians safe and organize traffic, dedicating one lane in each direction on Collier Boulevard for parking.