1. Now’s the time to make your comments on Lake O reservoir plan

The Army Corps of Engineers wants to know what you think about the plans for the reservoir being designed to help cut Lake Okeechobee discharges.

The Corps is preparing an environmental impact statement to evaluate and document possible effects of the reservoir design developed by the South Florida Water Management District and will accept comments on the plan through April 30.

All the comments will be included in both the draft and final environmental impact statements, said Jenn Miller, a Corps spokeswoman.

The district submitted its design for the reservoir to the Corps on March 30.

The design includes a:

The district claims the project will — when used in conjunction with other existing and planned projects— reduce the number of damaging discharge events from Lake Okeechobee to the St. Lucie and Caloosahatchee rivers by 63 percent and send an average of about 120.6 billion gallons of clean water south to the Everglades and Florida Bay.

Congress is supposed to approve the plan by Dec. 31, 2019, so that the federal government will pay its half of the expected $1.4 billion cost. Once approved, the project could be built in seven to nine years, water district Executive Director Ernie Marks told state legislators in January. – Tyler Treadway/Staff

The amount of sea ice in the Bering Sea west of Alaska was less this winter than any year since written records of commercial whalers started in 1850, before the Civil War.

The part of the Bering Sea covered by ice in February was about 150,000 square miles less than average, an area nearly the size of California.

The data come from a report from the International Arctic Research Center at the University of Alaska-Fairbanks.

John Walsh, chief scientist with the research center, said there was clearly an element of natural variability in the form of frequent storms and strong winds, “but the magnitude of the ice loss in response to winds and air temperatures was greater than it would have been in the past, without global climate change.”

The Florida Fish and Wildlife Conservation Commission (FWC) will implement a 40-day red snapper season in State and Federal waters off the coast of Florida beginning June 11. 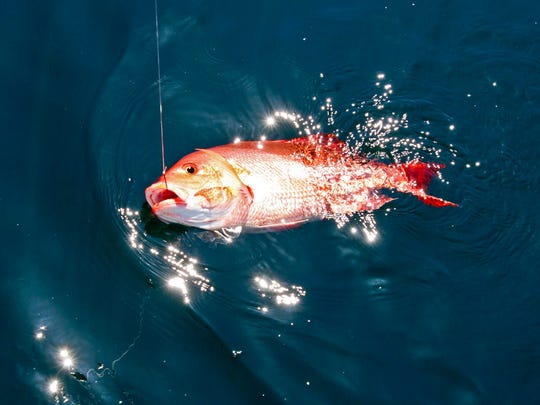 The National Oceanic and Atmospheric Administration (NOAA) recently approved an exempted fishing permit filed by the FWC that will provide more flexibility in the management of the Gulf red snapper fishery. C

“We have been involved in the red snapper fishery for years and we’re encouraged by this forward-thinking by the FWC,” said Brian Gorski, executive director of CCA Florida, the state’s leading organization dedicated to marine fisheries conservation, education and advocacy. “We are big proponents of state management and would like to see full state management for all reef fish in the future.”