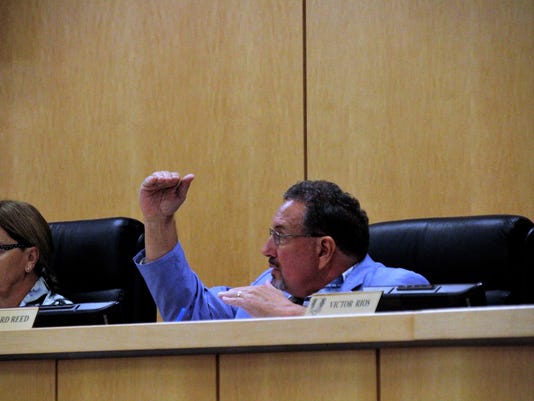 Councilor Howard Reed gestures to the members of Marco Island City Council where he believes the bar should be set for a new city manager.(Photo: Devan Patel/Marco Eagle)

After numerous failures to find a permanent city manager, the Marco Island City Council may turn to a free program to help aid in its quest, as we first reported June 6.

The Marco Island City Council voted 6-0 Monday to invite a senior advisor from the Florida City and County Management Association to its next meeting to provide an introduction and see if its advisory program for placing city managers may be of interest to the council.

Vice-Chair Charlette Roman, who authored a white paper on the program, suggested the city engage with the program to find an interim city manager as the city looks to add some permanence to a position that has been a revolving door for some time.

“They would introduce themselves to us and give us a presentation or information about how they can help us through this process,” Roman said. “At the same time, we could have that back-and-forth and see if we’re comfortable with this process.”

Roman’s suggestion to look for help comes on the heels of the City Council declining to hire any of the firms that responded to a request for proposals for executive search firms to place its next city manager.

Niblock, who at the time was on administrative leave pending a battery investigation, was found to have committed multiple actions that were grounds for termination.

A separate battery charge was also reported in Alachua County, where Niblock used to be the county manager.

The incident, which occurred prior to his hire by the council, was reported to authorities after the Marco Island complaint surfaced.

As the council has had its differences with respect to finding another city manager, the advisory program was an idea that was met with optimism from both sides.

“I think they have the potential to add true value to help us move forward from where we are,” Councilor Howard Reed said. “The fact that we have been without a longtime city manager for a long time indicates perhaps that we need some help.”

The program, which is comprised of retired city and county managers, can help cities in the following ways:

While finding a permanent city manager was on Reed’s mind, he questioned why the city would look to find an interim one when Finance Director Guillermo Polanco was serving admirably.

“We are not under any pressure to replace the city manager we have now, Gil Polanco,” Reed said.

Reed’s comments, however, were challenged by Councilor Larry Honig, who noted that Polanco has told the council that he was not interested in the full-time position.

“We haven’t held him to the same standards as we would a city manager and that makes a huge difference,” Honig said.