All Collier schools already had a single point of entry, to better monitor who is coming onto campuses.

It’s a little tougher to get into school this year in Collier County. That doesn’t mean students are being excluded due to academic performance. In the wake of the Parkland and other school mass shootings, Collier County Public Schools are instituting a number of new security initiatives to help keep the schools safe.

All Collier schools already had a single point of entry, to better monitor who is coming onto campuses, and classroom doors have been kept locked during class periods.

The most noticeable change will confront visitors whenever they come to a school. The single door, leading to the admin office, will be locked. To gain entry, they must ring a “video doorbell,” and show a photo ID to the attached camera, while telling school personnel their name, their reason for being there, and child’s name and teacher’s name if applicable. The school district was concerned enough about the impact of the new procedure they created a video tutorial on the district website, and sent multiple blast emails announcing the policy, and directing parents and others to the video.

Additional security measures include ID badges that students will be required to wear. High school students will begin wearing theirs immediately, with middle schools being phased in beginning in January. The student badges will be orange and horizontal, while the pre-existing staff badges are vertical and white.

“We were looking for something low-cost and high-impact to help enhance security,” said CCPS Superintendent Kamela Patton. Students are required to wear them “all day and every day. It will be obvious who doesn’t have a badge.” A new “WheresTheBus” app will help parents, students and teachers find their school bus. 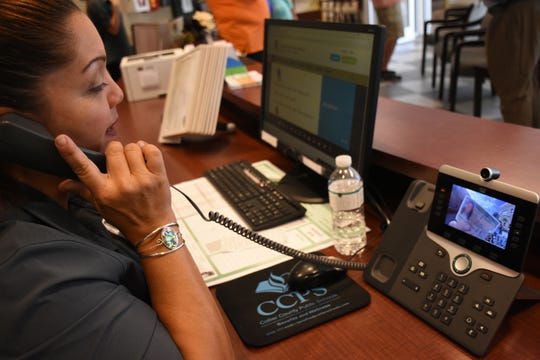 The Collier Sheriff’s Office is also working with the school system to keep schools and students safe. Sheriff Kevin Rambosk attended the CCPS Opening of Schools Kickoff event on Aug. 7, along with Patton and all the system’s principals and administrative leaders. Two weeks after the Parkland shooting, said Rambosk, the CSO had a deputy assigned to each school, whereas previously they had one per campus, which might include multiple schools. His department received an additional $1.6 million from the state to help with increased school security.

But involving the public at large, said Rambosk, is the key to keeping children safe. His department gave out free trigger locks in the Naples Daily News community room on Aug. 8, and will distribute additional locks at future events.

“We want to motivate everyone in the community to watch out for our kids,” he said.

That concept is behind a number of initiatives being put into place to support mental and emotional health of students. The school system will have additional psychologists on staff, with one in each high school, said Patton, and a social worker in each “feeder pattern” from the various elementary to middle to high schools. They will, she said, “connect concerns and issues to resources and programs,” using incremental funding, and attempt to identify and help troubled and potentially dangerous students.

School are instituting “Buddy Bench” and “We Dine Together” programs to help fight social isolation and incorporate all students into the school community, said Patton, “providing emotional support and helping kids connect.” Schools will have a New Student 30/60 Day Check-In to assess incoming students, and SEL or Social Emotional Learning education including twice-monthly SEL video presentations led by school principals. 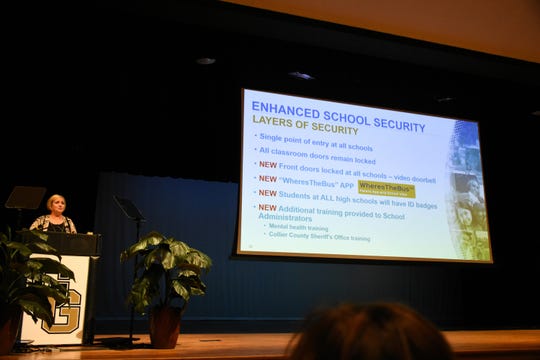 But the most noticeable security enhancement for school visitors will be those video doorbells, particularly the first time they encounter the system. CCPS communications director Greg Turchetta said he had been making the rounds for weeks instructing staff on how to operate the system.

Visitors gain access by showing an ID card. Acceptable forms of identification include a driver’s license, probably the most common, passport, birth certificate with photo ID, military ID, or ironically, a concealed carry ID. They are cautioned not to allow others to piggyback on their entry, although how they would stop them was not mentioned in the video.

“Once approved and granted access, our guests will again present photo identification and will receive a visitor’s pass using the existing visitor screening system,” says the district’s email. The final bullet point cautions that “Guests should plan to arrive at our schools earlier to expedite their visit.”