The Marco Island police officer terminated Tuesday was accused of having sex on duty.

A woman that had multiple sexual relationships with members of the Marco Island Police Department identifies Kevin Hennings as one of the officers.(Photo: Submitted)

The Marco Island police officer terminated Tuesday for violations of police policy is also the latest accused of having sex while on duty.

The city announced the termination of Kevin Hennings, a nearly 18-year veteran of the police department, without going into the specifics of the violations; however, internal affairs interview transcripts obtained by the Marco Eagle/Naples Daily News shed more light on the allegations against Hennings.

The woman said to be involved with Hennings told investigators that she had some form of sexual contact with Hennings 10 to 12 times while he was on duty. The woman, now 21-years-old, is the same person that was proven to have had sex on numerous occasions with Sgts. James Inlow and Neil Giansanti, both of whom resigned earlier this year, while they were on duty.

In an email to the City Council and all city employees, Capt. Dave Baer wrote, "Hennings was found to have violated General Orders associated with Conduct (Non-Compliance with Directives, Integrity, and Conduct Unbecoming) and telecommunications."

"This investigation and subsequent outcome serves to provide a clear message the Marco Island Police Department takes all violations of general orders or policy seriously," Baer wrote in his email. "Hennings’ actions are contrary to Departmental guidelines, moreover, undermined public trust. The men and women of the Marco Island Police Department seek to continue the partnership of trust with the community, serving with honor and integrity."

In interviews with the department, Hennings and one of his attorneys, Michael Braverman, disputed that an inappropriate sexual relationship occurred and questioned the merits of the case.

“ ... the fact that he’s in a location and says, ‘I am in a location with this woman,’ but says what activities she’s claiming takes place didn’t take place, I don’t know that that can be collaborated,” transcripts from a predetermination hearing on Sept. 4 recorded Braverman saying. “There’s no video. There’s no physical evidence. There’s no other witnesses.”

The internal affairs investigation into Hennings was launched on March 29, two months after the woman’s father contacted Police Chief Al Schettino about the woman’s relationship with Inlow and potential criminal wrongdoing.

The woman’s phone and computer were turned over to Collier County Sheriff’s Office for review and while no criminal wrongdoing was discovered, the Sheriff’s Office provided a forensic download of the devices that contained potential policy violations by multiple officers.

Text messages, Instagram communications and a video on the woman’s phone cross-referenced with shirt reports proved that Inlow and Giansanti had separately engaged in a sexual relationship with the woman on duty and violations were sustained against them.

Inlow and Giansanti’s resignations in February and March, respectively, occurred prior the completion of their internal affairs investigations.

A third internal affairs investigation into Detective Brian Granneman, who reported to Inlow, found that he knew of Inlow’s conduct but never reported it to other leadership at the department. Granneman received a formal reprimand from the department but remains employed. 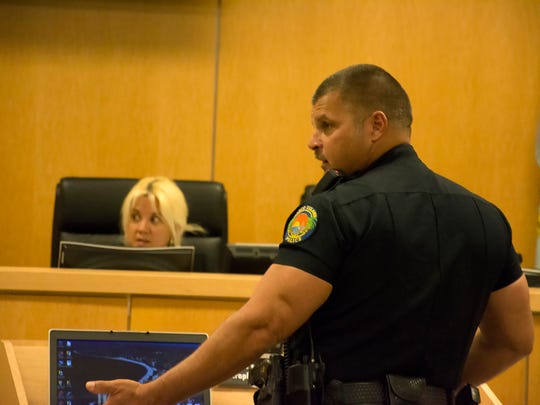 In her March 29 interview with Ken Afienko, the woman was asked at different times to name officers she had sex with on-duty to which she replied Inlow, Giansanti and Hennings.

With respect to Hennings, the woman told investigators of one particular incident that happened at Tigertail Beach in February 2017.

The woman’s sister, who she confided in about her relationships, told Capt. Richard Stoltenberg on April 6 that she was told of one incident but was also unclear about the details.

“ … I know something took place,” the woman’s sister said. “I don’t know exactly if it was legitimate sex but something happened. Well, she told me that something did. It was just so long ago that I can’t remember clearly.”

Afienko interviewed Hennings on May 21 where he asked about the sisters' testimony along with several text messages between the woman and him.

Throughout the interview transcript, Hennings said he could not recall having some of the text conversations with the woman and stated that he did not know it was her texting him at first.

“I just don’t remember at what point in time -- I’m trying to decipher through these text messages -- at what point in time that I discovered that it was her,” Hennings said in the interview. “I think it was right around when she was being nasty, um, very provocative and sexual. And that’s when I had the verbal conversation with her.”

Hennings was presented with a string of text messages sent by the woman after 4 a.m. on Jan. 11, 2017, when he would have been on duty.

One minute after the woman sent Hennings a sexually explicit text at 4:25 a.m, he replied back, “I had a call. Erase.”

Although Hennings told Afienko that he had a conversation with the woman about sending inappropriate text messages, Afienko presented another text message from Jan. 11 where she again sent a sexually explicit text message to which he replied: “LOL. Good night.”

Several more text message exchanges were presented including one from February 2017 where Hennings wrote that he was on his way to meet the woman after she asked where he was.

GPS records placed his vehicle in the vicinity of where the woman lived and later at Tigertail Beach for one hour, 4 minutes and 20 seconds. According to the woman, this was the last time she had sexual contact with Hennings.

Hennings said he could not recall what he was doing at Tigertail Beach and called into question the woman’s sanity when asked to explain why she would say that they had 10 to 12 sexual encounters.

The sister of the woman that was sexually involved with multiple members of the Marco Island Police Department told investigators that the woman had a penchant for saying things to get a rise out of people. (Photo: Submitted)

The woman's sister told investigators that the woman bragged about her relationships with officers and would say things to get a rise out of people.

Hennings and Braverman also provided the city with medical records that question whether he could have physically engaged in a sexual relationship with the woman during the time she alleged after he experienced complications from a surgery.

The medical condition was disclosed when Hennings gave his statement and the records were provided shortly thereafter. The doctors that Hennings saw for his condition were from the list of approved physicians in the city's insurance network.

The Marco Island Police Department declined to comment regarding the veracity of the medical evidence submitted.

Hennings admitted during his predetermination hearing that the answers he provided may have contributed to the belief that he was not upfront in answering questions but attributed his behavior to the fear of losing his job as he maintained his innocence.

Before Hennings was questioned by investigators, one of his other attorneys, Robert Bates, wrote to the city's legal counsel, Schettino and acting City Manager Guillermo Polanco on May 4 that Hennings was the subject of unwanted sexual advances by the woman and details of her attempts were shared with Inlow, who was also his supervisor.

Hennings, however, told investigators during his interview on May 21 that he never filed a complaint to Inlow or anyone else at the department about being stalked or sent unwanted text messages.

Bates is co-counsel for Hennings' civil lawsuit against the department in which Hennings alleges he was illegally Baker Acted and subjected to numerous internal affairs investigations.

In Bates' letter, he warned the department that if it used the woman to discipline Hennings, it would result in an EEOC complaint and further litigation.

Hennings began his career with the Marco Island Police Department on Nov. 6, 2000. His salary at the time of his termination was $72,231.43.