Three out of five Marco Island candidates opened up their campaign books; What'd they say?

With allegations flying around about campaign violations, the Marco Eagle requested bank statements and check registers from Council candidates.

Three out of five Marco Island candidates opened up their campaign books; What'd they say?

Allegations of campaign finance violations have crept into the conversation this election season on Marco Island, as originally reported in the Oct. 14 Marco Eagle and subsequently discussed in letters to the editor since.

After Richard Smith filed a complaint with the Florida Elections Commission against Dr. Jerry Swiacki, a candidate for Marco Island City Council, the Marco Eagle decided to ask that each candidate open up their financial records.

For the record, the candidates are not obligated to provide their bank statements and check registers, because they are not public records. But the documents have the potential to verify that the campaign treasurer reports are accurate; and in one case, accountfor the the veracity of some of the alleged violations made against Swiacki; based on the Eagle's previous reporting.

Why is campaign finances an important issue? One of the responsibilities of a city councilor is to be a steward of taxpayer dollars.

Three out of the five candidates -- Victor Rios, Sam Young and Erik Brechnitz -- participated in the request while Swiacki and Jim Richards declined to provide the requested documents.

Swiacki stated during last week’s candidate forum that his treasurer was out of town and he did not respond to a request for how much additional time he would need to fulfill the request. While Swiacki is treasurer of record on his account and submitted reports until late August, his comments were referring to his deputy treasurer, John Coff.

Replying to the email request sent to the candidates, Richards wrote: “As to your request for campaign bank statements and check registers I have to definitively decline. I turn in a financial report weekly which I believe is public record which, of course, you have the ability to request. Other than public information I see no value in providing backup information, bank statement and check registers.”

For the candidates that opened up their books, here’s what we found: 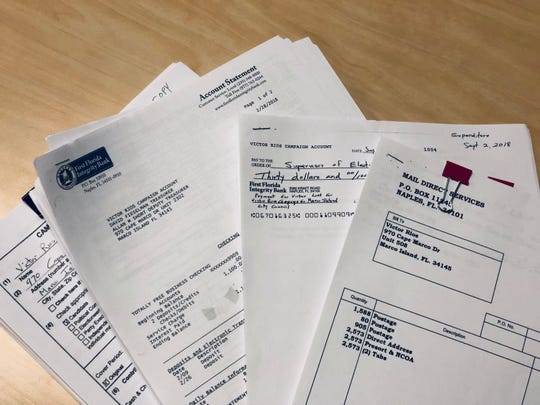 Rios was not only the first candidate to respond to the Eagle’s request, but he provided all invoices, deposit slips and check copies in addition to his bank statements and check register.

Despite the immense quantity of paperwork provided, all of the expenditures and contributions in Rios’ books were all in order and match his treasurer reports.

While Rios was the first person to file his candidacy and therefore has more treasurer reports than anyone else, he’s the only candidate to not have to amend any reports.

The only discrepancy in his reports was using the code CAN, for candidate expense, when the code MON, for a monetary expense, should have been used. This error was made by all of the candidates before City Clerk Laura Litzan informed them of the unintentional mistake in an Aug. 17 email.

Young provided his check register and bank statements in the early hours after the final City Council candidate forum and noted the request as “no big deal.”

The other error was transposing two digits for the checks and cash his campaign received between Aug. 11 and 23. This caused Young’s total monetary contributions to be temporarily inflated by $9.

While Rios was the first candidate to file, Brechnitz was a close second and also holds the distinction as the candidate to raise the most money thus far in his campaign, $41,600, through the period ending Oct. 12.

All of Brechnitz’s finances were in order with the exception of making the same error twice with regards to reporting contributions from couples.

One couple that sent Brechnitz a $2,000 check in April was reported as such. The item was later amended to separate the contributions to $1,000 a person to meet the limit established through state law.

At the Oct. 3 Florida Citizens Alliance candidate forum, Richards declared that he and Swiacki were not running as a “slate” but rather holding joint events at locations where costs could be split.

That, however, has not always been the case as evidenced by some of the more recent treasurer reports.

In Richards' Oct. 4 treasurer report, he reported a joint BBQ resulted in expenses of $2,034.74, split between direct payments to Sunshine Stitchers and reimbursements to his treasurer, Alisha Pacheco, and wife. If the expenses were split, Swiacki’s half would have amounted to $1,017.37.

Swiacki only reported $101.75 for the BBQ before re-coding the expense to another joint event he held with Richards. In Swiacki’s report for Oct. 6-12, he reported the BBQ, which took place on Sept. 21, as a $1,000 in-kind donation from Richards after reporting a $170.08 expenditure to Pacheco during the previous period. Richards reported he reimbursed Pacheco for $274.57 for costs associated with the event.

Florida statutes bind in-kind donations to the same $1,000 limitation as campaign contributions by an individual or entity.

Richards and Swiacki declared expenditures of $275 and $1,025, respectively, to the Coastal Breeze for the period of Oct. 6-12 when they had both advertised in the newspaper beforehand.

Swiacki and Richards’ BBQ event was advertised in the newspaper’s Sept. 14 edition but no expenditures were recorded beforehand. Swiacki also ran a half-page advertisement in the Sept. 28 edition before another advertisement appeared in its Oct. 12 edition. The advertising deadline is eight days prior to publication.

Coastal Breeze Publisher Valerie Simon had previously said that all advertisements had to be paid upfront which would indicate that Richards and Swiacki are misreporting when the expenditure occurred.

Marco Island City Council candidate Erik Brechnitz was required to pay for his political advertisements before they ran. (Photo: Submitted)

Brechnitz, for example, declared an expenditure in July for advertising in the newspaper for $4,275, weeks before his first advertisement ran.

Misreporting when a contribution or expenditure occurs is significant because it skews the available balance of campaign funds. Candidates cannot declare an expense if they do not have enough funds to cover the costs.

Falsely certifying the correctness of a treasurer report if it is known that it is incorrect, false or incomplete, is a 1st degree misdemeanor according to the Florida Department of State Division on Elections. It is also a violation of state law to deliberately withhold campaign financing information that is required to be reported.

This information is also found in both the state's candidate and campaign treasurer handbook and the Marco Island City Council candidate handbook.

Up through the period ending on Oct. 12, Swiacki had amended eight reports for the 10 periods he filed.