The beach along the center of Marco Island is due to be reshaped. Over a mile of Gulf of Mexico frontage will be part of a massive regrading project. 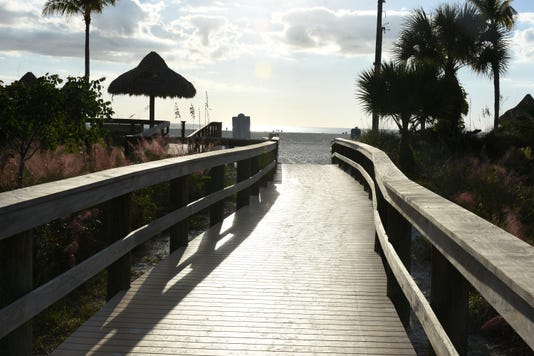 Residents Beach is over 200 yards wide, but will be narrowed by the beach regrading. Collier County will begin a million dollar-plus reshaping of the beach along Marco Island in the early months of 2019.(Photo: Lance Shearer/Correspondent)

The beach along the center of Marco Island is due to be reshaped. Over a mile of Gulf of Mexico frontage will be part of a massive regrading project being undertaken by Collier County government.

Over 170,000 cubic yards of sand will be shifted, after being dredged from the inter-tidal zone just offshore from the beach, said Collier County’s Coastal Zone Management Director Gary McAlpin.

Work will take place as much as 24-hours a day, six days a week, he said, with sand being scooped from the water’s edge by backhoes, heavy earthmoving equipment.

“We have to dredge at low tide, so sometimes we may have to go through the night,” he said.

The purpose of the work is not to “renourish” the beach, which is already over two hundred yards wide at Residents’ Beach, but to re-slope the sand, and remove dips and depressions that hold rainwater. In fact, pulling sand from the water’s edge will likely cause the beach to be narrowed, said McAlpin.

Residents, he said, have complained that the width of the beach creates a hardship when they want to reach the water, although in the “broader” picture of beach renourishment, having a wide beach is generally a good thing. 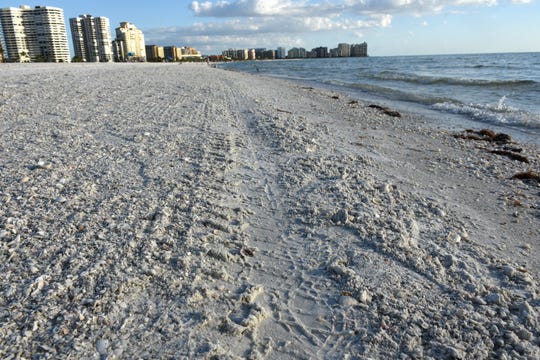 Collier County will begin a million dollar-plus reshaping of the beach along Marco Island in the early months of 2019. (Photo: Lance Shearer/Correspondent)

“In storm season, a wide beach is a good problem to have. But for those trying to reach the water, especially the elderly, it’s a long walk,” said McCann. 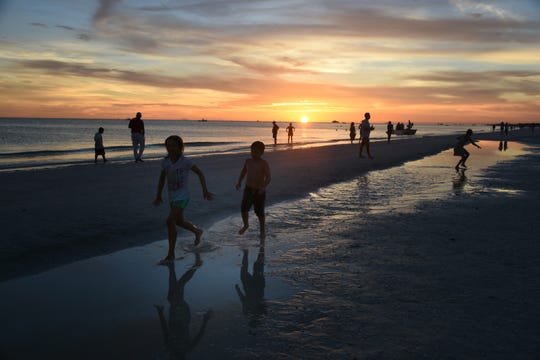 Kids play in a pool at the water's edge in this file photo. (Photo: Lance Shearer/Correspondent)

The uneven beach is a problem because when water pools in it, algae grows in the resulting ponds, said McAlpin, a potential health hazard. With water quality issues much in the news, including blooms of blue-green algae and red tide, “algae” is a word to get beachgoers’ and governmental stewards’ attention.

“We have to reslope the beach to get positive drainage. When we’re done, we’ll have a beach that drains,” without water building up, he said. McCann said that the ponds of fresh rainwater had even begun to grow grass over the summer.

“We don’t need grass growing on our beach,” she said. Early in the morning or just before sunset, or when people walk in the interior of the long stretch from Gulf to the boardwalk at Residents’ Beach, and their legs disappear behind a wall of sand, it is possible to see how uneven the beach is. 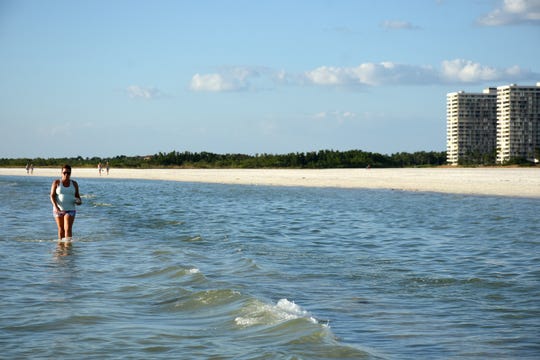 The county has a limited time window to complete the work, necessitating the nighttime operations. It has to be done around the “season,” so as not to disturb visitors. Those visitors are not the “snowbirds” or human winter residents though, but rather the sea turtles who nest on area beaches. Sea turtle nesting season runs from May 1 to November 1, so the work could not begin until this month, and must be completed by the end of April.

The resloping will stretch from the South Seas towers to just north of the J.W. Marriott hotel, meaning over a dozen beachfront condos may have backhoes dredging sand from the water’s edge at all hours during this period.
McAlpin appeared before the Marco Island City Council on Oct. 1 to lay out the plan, and during their Oct. 15 meeting, the council approved a letter to County Manager Leo Ochs removing dune plantings from the approved temporary construction language for the project, as required to move the work forward. 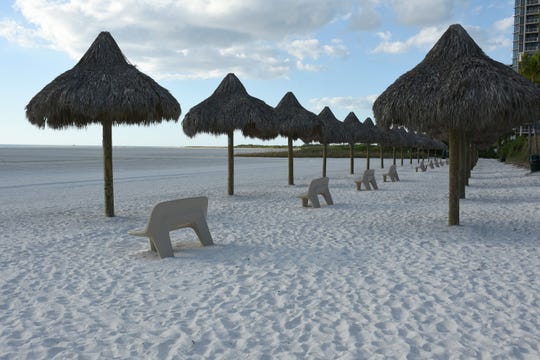 Residents Beach is over 200 yards wide, but will be narrowed by the beach regrading. Collier County will begin a million dollar-plus reshaping of the beach along Marco Island in the early months of 2019. (Photo: Lance Shearer/Correspondent)

The dredging and regrading is currently out for bid, said McAlpin, and will cost something over a million dollars, with funds coming from tourist tax receipts. So visitors to the area are paying for the upgrading of Marco’s beach. The Tourist Development Council grant application allocated as much as $2,300,000 for the project, as well as earmarking $6,437,000 for Hurricane Irma coastal damage repairs.

Before workers move onsite, probably after the first of the year, notices will be published in the newspaper, and signage posted to notify the public, said McAlpin.

“There will be plenty of beach access. This will benefit the residents of Marco Island – they get a properly draining beach. It will be good for the turtles and the shorebirds, too,” he said.