The Marco Island Planning Board has approved a planned unit development application that paves the way for an assisted living facility in the city. 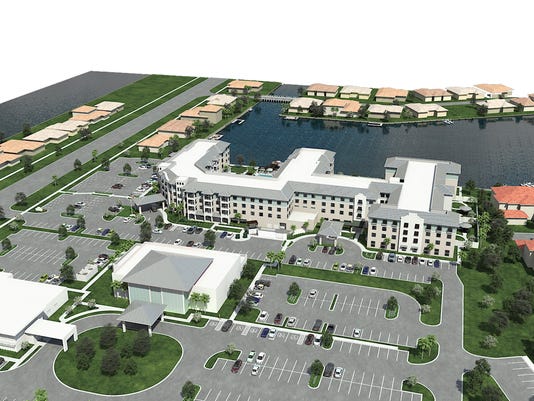 Walt Chancey, owner and developer of The Watermark of Marco Island project, said he wants to build a facility with assisted living, independent living and memory care capabilities at the corner of Heathwood Drive and San Marco Road.(Photo: Submitted)

The art of compromise may be bringing an assisted living facility to Marco Island.

After the Planning Board asked the developer of The Watermark of Marco Island to reduce the building height and the number of units, it approved the facility’s planned unit development application by a 6-1 vote.

The revised plan, located at Heathwood Avenue and San Marco Road, now consists of a 3-story building instead of four, a maximum height of 40 feet instead of 50 feet, 166 assisted living units instead of 206 units and a reduction of beds from 260 to 210.

The planned unit development application paves the wave to create a little less than 12-acre medical campus for which the assisted memory care facility will sit on five acres. The proceeds from the sale of those five acres will go towards constructing a new 12,000-square-foot urgent care facility for NCH.

Betsy Novakovich, a Marco Island resident and representative of NCH, expressed support for the project not only for the benefits of a new urgent care facility but for an asset that would benefit the citizens.

“We do have a very aging population here and my true belief is that we need to provide a center like what is proposed by The Watermark,” Novakovich said.

Prior to the board’s approval, the Watermark’s proposal elicited mixed feedback from a packed room of interested observers as well as the board itself.

Dan Smith, director of community affairs, told the planning board that city staff could not recommend approval of the application because there were too many unknowns.

Alfred Marchand spoke of concerns about the height of the original proposal because he believed the height of buildings was one of the most defining characteristics for defining a small town atmosphere.

Jack Patterson, whose children asked him to look into an assisted living facility, spoke from personal experience in supporting the project.

“I recognize the need because I don’t think I stand out as an individual that is unique,” Patterson said. “I think the island has a lot of people like me. I’ve heard a lot of trojan horse objections.”

Natalie Kirstein, a realtor on Marco Island, shared her personal perspective with having her mother in a memory care facility and the stress of commuting back-and-forth to see her.

“I see this need for a lot of my customers and the residents here,” Kirstein said. “When they have a loved one, and in many cases, it is where a spouse is in a facility, they have to commute back and forth to Naples or wherever that spouse is. They want to stay in that residence or as close to home as possible.”

For most of the members of the planning board, they agreed that there was a need for the facility but not without changes to the plan.

“It might be a wonderful PUD design from your perspective but it’s not Marco Island,” board member Dr. Ron Goldstein said. “I really think this design did a disservice to the discussion of putting an ALF on this island. I’ve softened up to that idea but not with this design.”

With the planning board voicing disapproval of the original proposal, attorney Craig Woodward asked for it to table the discussion for a short period so that the developer’s team could discuss changes and the feedback it received.

After returning from a closed-door meeting, Woodward came back with proposed revisions, which were accepted by the vast majority of the board.

Although the number of units exceeds what would be allowed by the comprehensive plan, Board member Dan Vergo believed the developer was following it by reducing the heights and units and bending as much as possible to meet the requirements.

Board Member Joe Rola was the lone dissenting vote.