Don Anderson is not happy with Regions Bank. The Marco Island resident uses the Marco Island branch for a variety of banking business, and one day last month, he went to the office on Bald Eagle Drive, and found all three of the bank’s drive-through windows were closed – permanently. 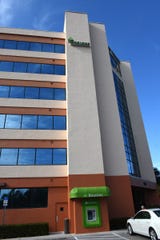 Furthermore, a sign said there would henceforth be no Saturday hours inside the bank lobby. Anderson emailed a letter to Regions Regional Vice President Rick Orosco, with a copy to Regions branch manager and Assistant Vice President Tom Disselhorst. He also sent a copy to the Marco Eagle.

Anderson, a former newspaper columnist for the Manchester Union Leader in New Hampshire, as well as sports editor and marketing manager, unloaded on the bank with a polite but scathing message that left no doubt how he felt about Regions’ action.

“My belief is the decision orchestrated by Regions to eliminate Saturday service and all drive-up window service destroys all facets of loyalty to the men and women and children who have scored a long lifetime in this community and its neighborhoods,” he wrote. “The disappointment in this apparent drop-dead decision by corporate management is far more than just disheartening since it would appear absolutely no regard has been weighed by Regions relative to the median age of the customers share a banking experience on Marco.” 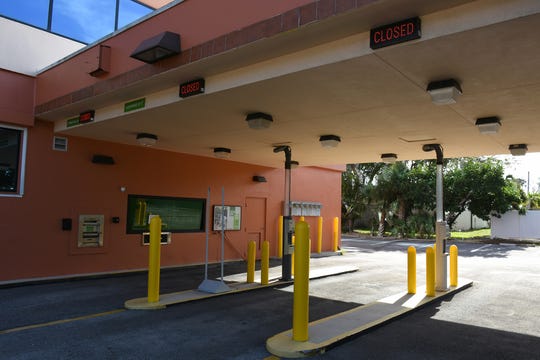 The 'Closed' signs are always lit at the drive-up lanes. The Regions Bank branch on Marco Isand has eliminated Saturday hours and permanently closed its drive-through windows. (Photo: Lance Shearer/Correspondent)

Anderson noted the lack of drive-through banking would be a particular hardship for the “elderly or handicapped (of which I am neither/well, I am 77 but in damn good shape).”

No notice was given to customers, other than having them show up and find they would not be able to do their banking on Saturday, or at all without finding a parking spot – often a challenge on Marco Island – and going inside. On a recent Saturday, a trickle of would-be customers came into Regions’ building, perhaps first having been unable to bank from their cars and found out they were out of luck.

“It’s very inconvenient,” said one of them, Marco resident Breanne Yocono, trying to do some banking for her husband. “I had no idea the hours had been cut.” 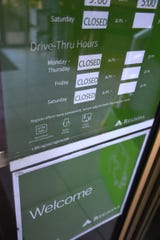 Signs at the branch inform would-be customers of the new policy on Saturday. The Regions Bank branch on Marco Isand has eliminated Saturday hours and permanently closed its drive-through windows. (Photo: Lance Shearer/Correspondent)

Branch manager Disselhorst responded to a telephone and email inquiry from the Eagle, but said that all company responses would have to come from the company’s headquarters in Birmingham, Alabama. Mel Campbell of Regions corporate communications office did call a reporter back and sent a follow up email but offered no likelihood the bank’s change in hours would be reversed.

“In recent years, Regions has taken a very deliberate approach to evolving how we serve our customers, looking at both new models for business and our branch locations,” wrote Campbell in part. “Our focus has been on enhancing the total customer experience across all our delivery channels, improving our abilities to deliver digital services and reviewing branch locations and policies so we can use our resources as efficiently as possible.

“A careful review of the branch and its volume identified opportunities to consolidate some of our hours of operation and drive-thru availability, based on traffic, new technology, transaction volume, proximity of other branches and drive-throughs and other factors.”

Marco Island Regions customers can bank without getting out of the car by driving to the bank’s Lely branch on the East Tamiami Trail, which offers a drive-up window but not Saturday hours.

In recent years banks, along with other brick and mortar businesses and industries certainly including newspapers, have seen major changes in how customers access their services. 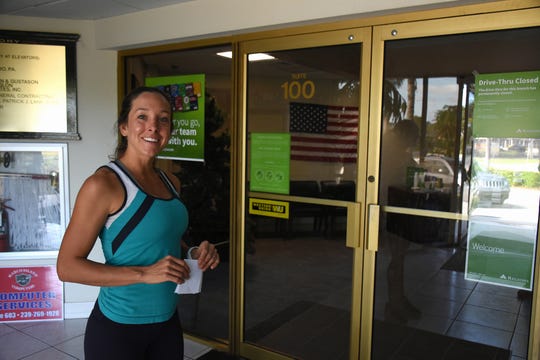 Breanne Yacono of Marco Island finds out she won't be able to do her banking on this particular Saturday. The Regions Bank branch on Marco Isand has eliminated Saturday hours and permanently closed its drive-through windows. (Photo: Lance Shearer/Correspondent)

“Nothing any business does, no service or product, is any more important than outstanding customer service,” said retired Marco Island banker Keith Dameron. “In today’s service environment, you can stand out by providing average customer service.”

The US Bank Locations website lists 11 bank branches on Marco Island, many of which offer Saturday hours and drive-through banking. But even though his frustration with Regions was evident, Don Anderson said he was not planning to yank his business.

“All of our accounts, all our pensions, our social security, were set up through AmSouth,” which was absorbed by Regions, said Anderson. “It’s a real pain to change your bank.”

Regions Financial Corporation, with $125 billion in assets, is one of the nation’s largest full-service providers of consumer and commercial banking, wealth management, and mortgage products and services.  Regions serves customers across the South, Midwest and Texas, and through its subsidiary, Regions Bank, operates approximately 1,500 banking offices and 2,000 ATMs.