A celebration of life for renowned Island architect Herbert Rosser Savage is scheduled for 1 until 4 p.m. Sunday, March 10.

Herb Savage at the city campus on Monday, Aug. 28, 2017, Marco Island celebrated 20 years of being a city. (Photo: Jodi Pree/Correspondent)

Craig Woodward will have opening remarks; and Rev. Kevin Koenig of Marco Lutheran will offer prayer. There will be a presentation of colors and a military 21-gun salute.

Marco in Bloom is the event that gives recognition to Marco Island  property owners for creating beautiful front yard landscapes, while keeping the Island’s tropical character and natural beauty.

The City of Marco Island, through the Beautification Advisory Committee has been promoting Marco in Bloom since 2011.

Criteria to select the winners include the use of native plants, color and contrast, creativity, water wise plants, and view from the street. Minimal use of grass is encouraged to conserve water.

Marco residents and visitors are encouraged to take a few pictures of the front yards of the properties that they feel should be recognized and describe in a few sentences why they support their nomination.

The nominating forms can be downloaded at cityofmarcoisland.com or picked up at the offices at Mackle Park.

The deadline to nominate properties for the contest is April 15. Members of the Beautification Advisory Committee  will be the judges. Winners will be presented at the City Council’s meeting in May 6. – Maria C. Tobin/Special to the Eagle

Public encouraged to submit nominations for artist of the year

Each year in the spring, the Marco Island Foundation for the Arts (MIFA) recognizes a new ‘Artist of the Year.’ This non-profit organization is once again requesting the public to submit their nomination for the 2019 artist of the year in writing and submit it no later than April 15.

MIFA’s mission is to promote the visual, literary, and performing arts in public places on Marco Island. The Artist of the Year award recognizes a person or a group with long standing service to the community, who contributes artistic excellence in the visual arts, performing arts or the literary arts. 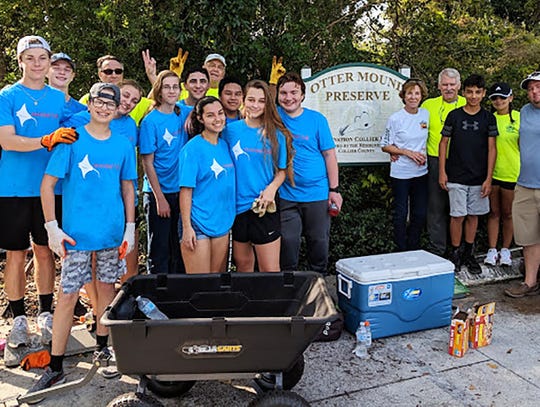 The group worked for about an hour clearing out dead underbrush, followed by about two hours of adding three to four pounds of mulch to the trails that run through the Preserve. As explained by President Wagor, “This is a great project. We do this every year to help maintain this important natural habitat. Working with members of the Academy’s Interact Club makes it even more fun.”

Otter Mound Preserve is a tropical hardwood hammock covering 2.45 acres. It was acquired by the County in 2004 and 2007. 57 species of birds and 127 plant species have been recorded at the Preserve. Other wildlife observed includes the Florida gopher tortoise, Virginia opossum, armadillo, raccoon and bobcat.

The Rotarians and Interact student’s effort is to maintain the property in its natural condition prior to modern development. The trail provides a safe and pleasant visitor experience, consistent with protection of the site.