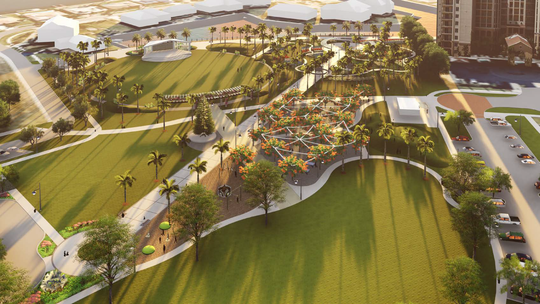 In what was called the culmination of 50-plus public meetings and input from hundreds of speakers, the Marco Island City Council has approved a new master plan for Veterans’ Community Park.

Parks and Recreation Advisory Committee Chairperson Dr. Carlos Portu and Kimley-Horn and Associates landscape architect James Pankonin presented the master plan to  City Council Monday, setting the stage for the council to decide how it’s going to fund the park, which is estimated to cost more than $8 million to build the plan.

Councilor Charlette Roman said City Council needed to have the discussion to determine how much money the city wanted to budget, whether to do it in phases as well as what the desire was of Marco Island residents.

“We spent $200,000 on two master plans and I feel we need to be more responsible with the taxpayers’ money moving forward,” Roman said.

While a master plan was approved in 2009 for the park after close to a year of gathering input from the community, the build out languished, prompting the need to make sure the community needs and wants were the same.

Community input and outreach determined that the top-4 infrastructure improvements sought by the community were restrooms, a band shell, increased shade and landscaping.

With the project most likely going to have to be built over time, Pankonin provided a potential plan that saw the city tackle the project through five different phases and two flex phases, beginning with memorial enhancements, the build out of a memorial garden and a waterfront promenade.

Pankonin said the band shell and restrooms were identified as flex phases because they could be done at any time the council desired.

Asked how long the project could take if the council was able to secure $8 million right away, Pankonin estimated it would take a little less than two years to go through the design and construction processes.

Pankonin said the next step was for the city to finalize the scope of the project and the initial fee design.

With around $149,000 in funds for Veterans Park left in the capital expenditure budget, council has approved leasing those dollars to keep the process moving forward.

Councilor Jared Grifoni has asked the city to provide a breakdown of the funds the city will receive from the recently approved one percent county sales tax and what the rules were for using those funds once they are given back to the city.

Grifoni said based upon current estimates, the park could be funded with about two years of sales tax revenue but there might be other projects and priorities depending on some of that revenue.

Calling it a missed opportunity, Grifoni said the city should have made connected green space and parks a legislative priority this year because they may have been small grants that could have helped with the funding of the project.

Grifoni said he was comfortable with what was originally presented but has grown even more comfortable after the latest revisions to the master plan.
While there have been some minor disagreements about the design of the park, Grifoni said he anticipated more people will buy into it once the concrete plan was approved and built out.

“I think everyone is going to find a way to enjoy this once it’s completed,” Grifoni said.

In supporting the park master plan, Councilor Larry Honig said the city also needed to recognize the efforts of past parks committee members and citizens who were instrumental in pushing the plan forward.