Sunday was Harden's last day as the interim city manager of Marco Island. Mike McNees is now the new chief in town. 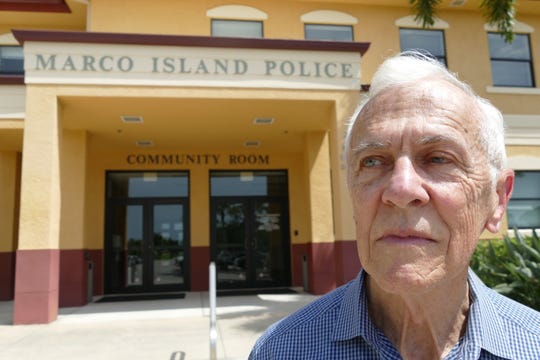 David Harden will continue to work for the city of Marco Island during the month of July to assist with the budget preparation for fiscal year 2019-2020. (Photo: Omar Rodríguez Ortiz)

It was the height of the Vietnam war and the number of stationed U.S. troops had increased to half a million while many Americans protested the war at home. David Harden had just finished a masters degree in city planning from Georgia Tech.

"I knew that I could wait to be drafted or I could join something," said Harden, 76, to Marco Eagle.

Harden and a friend decided to join the Navy in the summer of 1967 and he became a Navy Supply Corp.

"[They] are the business managers for the Navy," Harden said.

"I was the supply officer on a ship that was home-ported in Yokosuka, Japan and did fire support off the coast of Vietnam," Harden said.

As the only supply officer on a small ship, the USS Clarion River, Harden had many different responsibilities. He was the disbursing officer in charge of making sure the sailors got paid, the commissary officer responsible for the ship's mess and he also was in charge of ordering repair parts for the ship.

When the ship was providing fire support, Harden was also an officer of the deck, the person in charge of navigation and the safety of the ship.

Now, almost 50 years after he last set foot on the Clarion, Harden reflects about his life as a soldier, as the city manager of Delray Beach, Florida, and as acting city manager of Marco Island.

Harden did not know right away he wanted to be a city manager. He was completing a bachelors degree in chemistry from Emory University in Atlanta when he started having trouble in class. "In my senior year, I just hit the wall," Harden said. "I could not make myself do it anymore."

After managing the Clarion, Harden continued his service with the Navy reserves and retired as captain in 1989.

Harden's first job after he finished active duty was working for the Orange County Planning Department, where he worked for three years. He then became the city planner of Winterpark, Florida, located just north of Orlando.

In 1990, Harden was hired as the city manager of Delray Beach, a job he kept for almost 23 years.  When he moved to Delray Beach, Harden said the city suffered from what he calls a "civil inferiority complex." 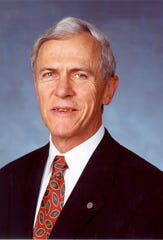 Official portrait picture of David Harden as the city manager of Delray Beach, a position he held from 1990 to 2013. (Photo: Provided by David Harden)

Harden said people from Delray Beach were envious of Boca Raton. One example,  there was a new subdivision built between the two cities that sued the U.S. Postal Service because the federal agency had assigned to it a Delray address and not Boca Raton's.

"When I retired from Delray Beach, this situation was reversed and (we) had people from Boca Raton moving to Delray Beach because they thought it was a much more interesting place to live," Harden said.

The downtown vacancy rate in Delray Beach was between 60 and 70 percent. "They would talk about during the summer time you could role a bowling ball down the middle of the street and it wouldn't hit anything," Harden said. "You go to Delray today, any day of the week, the downtown has a lot of pedestrian activity."

These changes came about, according to Harden, because he recognized he couldn't do it alone, that he needed a team. "Find good people, support them (and) give them room to implement their own ideas and make things happen," Harden said.

Building a sense of community was also very important for Harden. He said that, during his tenure, the city worked with the school district to move the high school to the center of Delray Beach. "I felt it was important [...] for kids to be able to go to school in Delray Beach and have friends in Delray Beach instead of being scattered all over in Boca Raton or anywhere else," Harden said.

In January, Harden replaced acting city manager Guillermo Polanco, who was asked to serve in that capacity after the City Council fired Dr. Lee Niblock in March last year.

City Council fired Niblock three months on the job after he came under investigation for an alleged battery incident in January 2018.

Within the first weeks of as the interim city manager of Marco Island, Harden realized there was a lot to be done in a short period of time. The city of Marco Island lacked written policies on how to handle certain situations, according to Harden. For example, there were no written standards of conduct for employees.

The Administrative Policy Manual also includes the rights of employees and how they can respond when they have been accused of violating the code of conduct. "It didn't have any of that," Harden said. "There is some guidance in the union contracts for police and fire fighters but there (was) nothing for general employees."

There were also no written policies for internet usage and electronic communications, according to Harden. "There was nothing in writing," Harden said.

As of mid-June, when the Eagle interviewed Harden, he was adding the final touches to some of these policies. 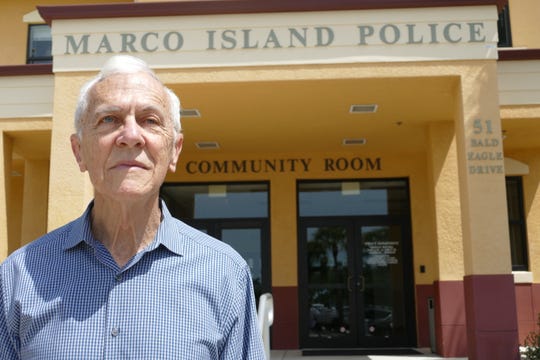 One of Harden's most notable decisions as the Marco Island interim city manager was to ask former Marco Island police chief Al Schettino to resign.

Schettino had made multiple questionable decisions, including putting Tige Thompson back on patrol. Thompson was a Marco Island police officer that the state attorney refused to use as a witness in criminal cases due to his lack of credibility.

Another former Marco Island police officer, Sgt. James Inlow, was found to have had sex while on duty and was later decertified as a law enforcement officer in the state.

"After learning some of the things that had been going on, I concluded that department really needed a cultural change and was convinced that it could not happen with the current leadership and that we needed a new chief," Harden said. "That's when I asked for Chief Schettino's resignation."

"He asked to stay until June 15th to retire and I agreed to allow him to do that," Harden said.

Schettino retired in May and Captain David Bear became the interim police chief. In June, Harden working with McNees, selected Tracy Frazzano from New Jersey as the new Marco Island police chief, making her the first woman to hold that position.

Both he and McNees independently ranked Frazzano as the top-choice for the chief's job, he said. She is expected to start next month.

The death of a son

Just days before interviewing the finalists for chief of police, Harden and his family received terrible news. His oldest son, Jeremy, had passed away. He had been previously diagnosed with vein thrombosis but the official cause of death was still unknown as of mid-June. 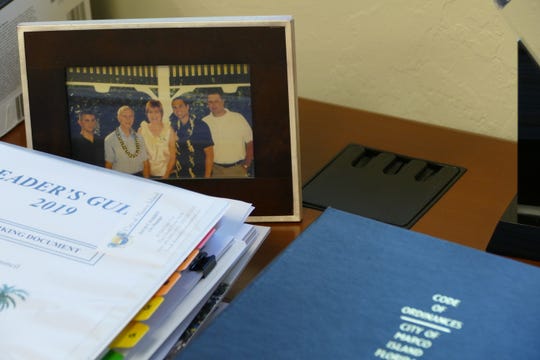 A picture of David Harden next to his wife and three sons stood out between the Marco Island Code of Ordinances and other official documents in Harden's office on June 18, 2019. (Photo: Omar Rodríguez Ortiz)

"(He) was the most difficult, challenging child," Harden said followed by a chuckle. "(He) was very strong willed and rebellious."

"The things that I admired about him was that he was a very hard-worker and very loyal to his employer," Harden said.

Of his three sons, Jeremy, 43, was the one that lived closest to Harden and his wife, Andrea Harden. He is survived by his wife and three children.

Despite his personal loss, Harden came back to work after three days of absence to finish the selection process for the new police chief. He interviewed the last candidates the day before his son's funeral.

Harden said he came back because selecting the new police chief was important for Marco Island.

"I felt that it was really critically important for the city to get it done," Harden said.

Harden said he looked forward to moving back to Delray Beach with his wife.

"We have a house that we moved there from West Palm Beach that was built in 1926, Mediterranean revival house, we feel very blessed to have it," Harden said. He said he will spend time making minor fixes to the house, a skill he learned as a kid building fences and cow pens in his hometown of Okeechobee, Florida.

In addition to his wife, there are other people Harden can't wait to see more often.

"We have six grandchildren and I'll enjoy spending more time with them," Harden said.

Harden will continue to work in City Hall until the end of July to assist city manager McNees with the preparation of the city's budget for the fiscal year 2019-2020.