The city of Marco Island is looking sell naming rights for the park in hopes that the funds will expedite its buildout. 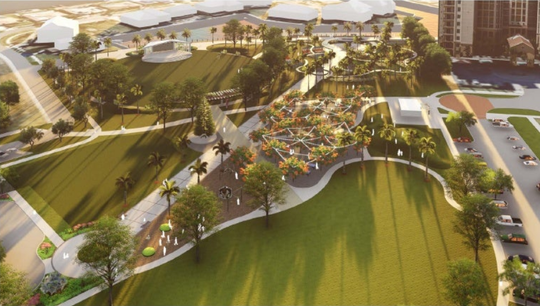 Recognizing the desire of its constituents to develop Veterans' Community Park, the city of Marco Island is looking sell naming rights for the park in hopes that the funds will expedite its buildout.

City Council approved an updated park master plan months ago but those proposed improvements come with an estimated price tag in the millions of dollars.

Proceeds from the countywide one percent sales tax surcharge will help lessen the burden, but the city believes selling away naming rights could aid in the process.

"I know there are a lot of generous people in this community that want to do it because they want to support Marco Island (and) they want to support Veterans' Community Park," Grifoni said. "Then, there's other people that have a reason to want to put their name on something like they do in Naples and other communities across the state of Florida and the country."

The development of the park has been an uphill battle for the city for a decade.

Ten years ago, the city approved a master plan but did not put forth the resources to make the concepts and designs a reality.

With so much time elapsing, the city went through the master plan phase again to ensure the needs and wants of the community were the same.

Two weeks ago, the council approved a $595,000 contract with Kimley-Horn for design, permitting, management and construction services for the new master plan.

The master plan, which was approved five months ago, contained various options and price points for the city to consider. The middle point for buildout was estimated to be around $8 million once the design, construction and permitting fees were added.

Grifoni suggested the city advertise opportunities or provide more detailed information about individual items that could be sponsore, such as the bandshell, benches and pavers, to prospective donors.

"It makes a heck of a lot of sense for our taxpayers if there any individuals or businesses who want to sponsor certain things and then there is the advantage for the business or individual involved where they get to promote themselves or their entity by being a huge part, a significant part and an important part of Veterans' Community Park," Grifoni said.

Council Chairman Erik Brechnitz said the parks department was in the process of doing exactly what Grifoni proposed.

Brechnitz said that he and Parks and Recreation Chair Dr. Carlos Portu have already met with two major prospective donors about naming rights.

"I'm hoping one of these two will reach fruition," Brechnitz said. "We're working on it."