The Uncounted: Who is part of the pandemic death toll?

The true death tally from the pandemic is hard to know, but Florida medical examiners sometimes test patients after they die for COVID-19.

The Uncounted: Who is part of the pandemic death toll?

Michael Pellettiere had been fighting a persistent cough for a week.

The 54-year-old Melbourne man usually doesn't go to the doctor.

But his cough apparently concerned him enough that he reached out to his family to let them know he was sick, and headed to urgent care on April 6. The wait was so long he left.

Two days later he was found dead at home.

Pellettiere was never tested for COVID-19.

He had multiple health conditions that put him at high risk of death from the new coronavirus: he was overweight, had gout and was immunocompromised. But his father and brother will never know if COVID-19 contributed to his demise. His listed cause of death: heart attack. An autopsy was never performed and his body cremated last week.

Across Florida, medical examiners are responsible for investigating and confirming any possible COVID-19 deaths. Counting the coronavirus dead as accurately as possible is critical to assessing just how great a threat the virus poses.

But what constitutes a coronavirus death? The answer, it seems, changes depending on who's doing the counting. 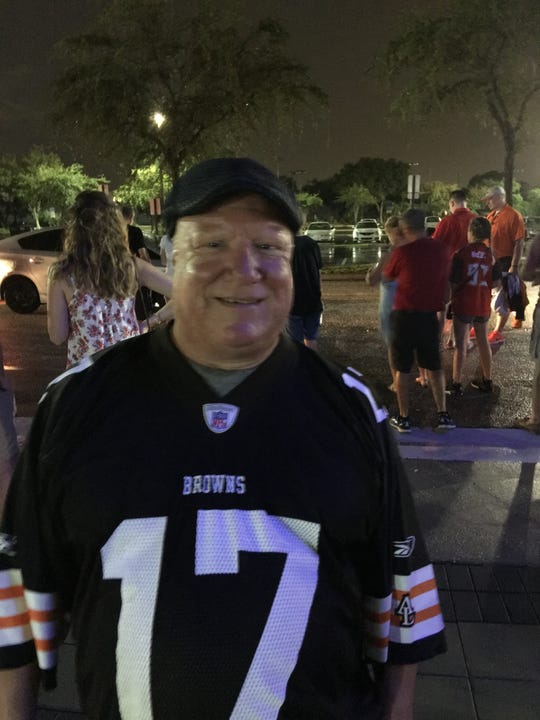 Michael Pellettiere, pictured at a recent Cleveland Browns versus Tampa Bay Buccaneers game in Tampa. He was a lifelong Browns fan. (Photo: Courtesy of Joseph Pellettiere)

At the start of the pandemic, the state and federal authorities issued guidance aimed at ensuring an accurate death count.

For medical examiners in Florida this included instructions on how to handle a death if it was referred from a hospital, the public or a funeral home. In every case, a positive COVID-19 test was required, according to guidance from the state Medical Examiners Commission.

That can mean waiting on a test result taken at a hospital before a patient died.

It also can mean testing the dead.

"The only way currently to confirm a positive case is with testing," Brevard Medical Examiner's Office investigator Craig Engelson wrote in an email.

While securing testing has been a challenge for the living, so far at least, medical examiners offices across Florida have not reported any difficulty securing tests when needed, according to the chair of the Medical Examiners Commission, Dr. Stephen J. Nelson who was aware of at least a handful of cases confirmed post-mortem.

"All they need to do is ask DOH," said Nelson who is also the chief medical examiner for Polk, Hardee and Highlands counties.

In Brevard at least three post mortem tests have been conducted. So far, all have come back negative. 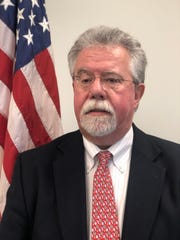 Engelson said his office has also provided funeral homes with questions to ask prior to picking up a cadaver from a hospital. If any dead were positive or awaiting results, the funeral home notifies the Medical Examiner's office and will not handle the body until cleared to do so.

"If we find out that just prior to death they were showing signs of COVID-19.  That’s when we perform post-mortem test," Engelson said.

A process that should be revised?

But what of those who are found dead on the street, such as a homeless person, or found dead in their homes, such as Michael Pellettiere?

"Under any of the scenarios you mentioned we would use due diligence to ascertain the person’s (past medical history)," Engelson wrote. "We would focus heavily on their health status prior to death."

"If we find they were showing symptoms we would seek direction from DOH.  If they say yes, we would perform a post mortem.  If not, we would proceed with our normal procedures."

The Department of Health did not respond to inquiries on how many post-mortem tests have been conducted across the state, or what criteria it uses to approve a post-mortem test. 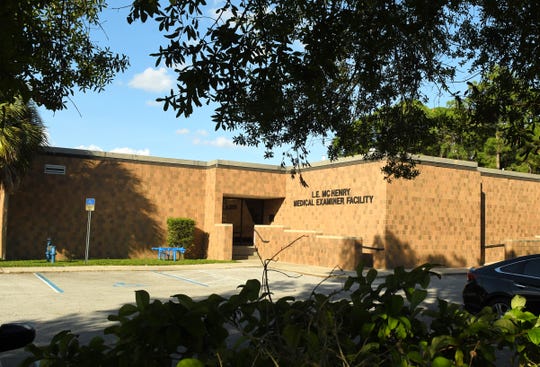 "Post Mortem Testing is on a case by case basis.  We report as much information as possible to include if there are clues left at the scene as to cause of death.  If DOH says no test, we do comply.  Any criteria is strictly DOH and not my office," Engelson wrote.

The Melbourne police officer responding to Michael Pellettiere's residence contacted the Brevard Medical Examiner's Office which decided not to investigate the case.

"The totality of the case is always taken into consideration.  Yes he had a cough but no reported fever.  As you noted he had several comorbidities.  There was no indication of travel or a known exposure," Engelson wrote.  "We felt that the case did not fall within our jurisdiction." 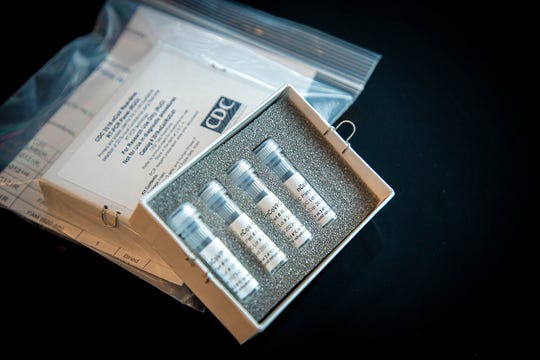 Pellettiere's brother Joseph, 49,questioned that decision and said it makes him fear COVID-19 deaths could be missed leading to an undercount.

According to Joseph Pellettiere, the medical examiner's office told him that Michael would have only been tested if he met three symptom criteria, most important among them a fever.

"Well, no one really took his temperature to know if he developed a fever because he didn't get treated at the clinic," he said.

While Joseph Pellettiere said he understands following protocols, the absence of a post-mortem test left the family with more questions about what really caused his brother’s death – and a lack of closure.

"I'm an engineer. So, I understand following processes, things like that," he said. "Maybe it's a process that should be revised."

Joseph only regrets not speaking up sooner, as by the time he questioned the Medical Examiner's office it was too late to perform a viable test, which he was told had to be performed within 48 hours of death.

The scale of how many missed deaths exist may take months or years to determine, but analysis of overall death data from several European nations by The Economist indicates that the number of COVID-19 deaths may be 30% higher than reported in those localities.

That's concerning because an accurate death tally is an important piece of data to be considered as elected officials such as Florida Gov. Ron DeSantis plan for reopening the state. How confident can they be in that tally, which currently stood just below 900 as of Wednesday morning.

There’s no easy answer. Medical examiners say they can’t test everyone on the slightest suspicion, nor have they been directed to.

Engelson in emails to FLORIDA TODAY, said that so far there has been "no direction that every death is to be considered a COVID case. We still have all types of deaths occurring."

"Our investigations along with the assistance of law enforcement will continue to ask as many questions as possible so we can make the most informed decision possible on each case," he said.

Then there’s another issue: how long does the virus survive after death?

CDC guidance would be helpful on this, Engelson said.

"I have no information – this is a developing science – for how long this virus remains alive on/in dead people," Nelson, of the Medical Examiners Commission wrote in an email. "I would suggest treating the dead as though they are potentially infectious."

As for when to conduct a post-mortem test, Nelson said he would follow the CDC guidelines "recognizing the test kits are not plentiful for “surveillance” testing of everyone."

The latest Centers for Disease Control and Prevention guidelines for post-mortem testing from March 25 do not indicate a window of time after which COVID-19 testing is no longer viable after death.

"We are working uncharted territory but still strive to do the absolute best job possible for our community," Engelson wrote.

Beyond who to test lies another question as well. Who to count among a state’s COVID-19 dead? If a New York resident dies of COVID-19 in Florida, is that a Florida death or a New York death?

Disagreements over that "Florida death" question between the Medical Examiners Commission and the Florida Department of Health meant that snowbirds and other non-residents who die in the state are recorded by medical examiners but not reflected in the DOH state death totals.

Two weeks ago that discrepancy was as high as 40 deaths, by Wednesday morning it had dropped to less than a handful when medical examiners had recorded 891 deaths statewide, compared to 893 reported by DOH.

While this suggests that DOH may have decided to count previously excluded deaths, the agency did not provide an explanation for the change in numbers.

But the spat did reach the point earlier this month where the Florida Department of Health tried to block medical examiners in the state from releasing any data their offices routinely collect on COVID-19 deaths.

Nelson told FLORIDA TODAY that the DOH's general counsel in a phone call with the commission's counsel tried to argue that "anything dealing with death registration" is confidential and isn't a public record.

"For them to tell us that what we do is now confidential: it's just the most bizarre legal theory,” Nelson said.

The DOH countered that they’d only reached out to the medical examiners "to explain concerns on disclosing personal identifiable information."

After initially persisting and releasing the information upon request, as of this week, Nelson said he is blocked from releasing their table of deaths because of two columns of information which the Department of Health contends are not public record. These are the columns that report the cause of death and a brief description of the incident.

Adding to the complications of getting clarity around the COVID-19 death toll is that states are not acting uniformly.

While in Alabama some deaths with a positive test result aren't counted, in Colorado cases that fit a diagnostic profile but are absent a positive COVID-19 test are added to the total.

The Colorado method is consistent with CDC guidelines revised in the past week that do not demand a positive test for the fatality to be counted. In New York, that change permitted an additional 3,700 deaths to be counted last week.

For now Florida has not adopted the CDC’s updated guidelines. The criteria remains that a positive test must accompany the dead.

And as Pellettiere’s case shows, it’s still unclear how wide a net will be cast by post-mortem testing.

Alessandro Marazzi Sassoon is a watchdog reporter for FLORIDA TODAY. Contact him at 321-355-8144, or asassoon@floridatoday.com. Twitter: @alemzs